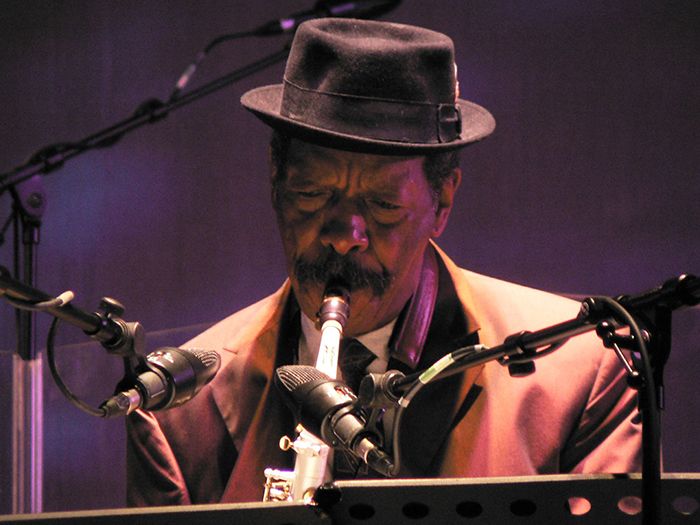 Jazz pioneer Ornette Coleman has died at the age of 85, Getintothis‘ Paul Riley celebrates his legacy.

1959 is one of the most important years in the history of Jazz. Prior to this, Jazz had been defined by its adherence to certain styles and formats, most notably bebop and big band; it was all about improvising over the patterns of popular songs. Piano was a staple instrument in most jazz outfits, and the music generally followed a number of set chord changes with traditional harmonies.

In 1959 that mould was broken. Miles Davis released the quintessential Kind of Blue and began the sessions for 1960’s Sketches of Spain. Days after playing on the Kind of Blue sessions, John Coltrane began recording Jazz Steps. Charles Mingus, one of the greatest jazz double bassists, recorded Ah-Um and Blues and Roots. Dave Brubeck’s revolutionary Time Out featured songs in a mind-boggling number of time signatures.

Ornette Coleman’s second album is yet another on that list of essential 1959 records.

Cheekily entitled The Shape of Jazz to Come, it featured a stripped down band consisting of drums, acoustic bass, pocket trumpet and alto sax. In dropping any of the conventional chord instruments such as guitar or piano, he opened the doors to a new world of improvisation and caused a storm of controversy and criticism, but that album title proved to be prophetic, as he blazed a trail that many others were to follow.

Born in Texas, 1930, Coleman attended Fort Worth’s I.M. High School. From early on in his life, he cut his teeth on blues, Mexican American and country-western music, and earned the money for his first saxophone by shining shoes.

He was heavily influenced by the bebop tradition, mastering his alto saxophone by the time he was 17. Coleman’s musical approach saw him kicked out of his high school band, after a performance of Sousa’s Washington Post March to which he added an impromptu bebop improvisation.

He switched to tenor sax, at the age of 19 joined a travelling show, and later went on to tour the country playing R&B. Again, his refusal to play jazz by the rules got him into trouble.

He was assaulted by audience members at a show in Baton Rouge, who told him ‘You can’t play like that,’ before beating him up and throwing his saxophone off a cliff.

Replacing the lost instrument, he switched back to alto sax, which became was the instrument that he was most known for. Coleman is credited with the creation of free jazz, music in which he said “no one player has the lead; anyone can come out with it at any time.“ He pioneered a new style of playing, and released numerous exceptional albums in his prolific career.

His music was as revolutionary as it was divisive, but it is difficult to deny its brilliance. A constant innovator, he was awarded a lifetime achievement Grammy and a MacArthur Foundation ‘genius’ award, not to mention a Pulitzer Prize for his 2007 album Sound Grammar.

Finally, as Getintothis pays tribute to a great of the jazz world, it would be remiss of us not to also give an honourable mention to another icon. Sir Christopher Lee – more loved for Dracula, James Bond, The Wicker Man and Lord of the Rings, but he was no stranger to a bit of heavy metal.

A fond farewell to a pair of genuine legends.