Getintothis ponders this year’s most infamous housemates’ taste in music…

Much like the Gallaghers or Lily Allen, you either love or loathe the spectacle that is Big Brother. But similarly to the Burnage Brothers or Mouthy Miss Myspace, Channel 4’s house of fun is insatiably irresistible in the entertainment stakes.
I’ll be honest, I am a devotee. I care not for the ‘social experiment’ side, I’ll be tuning in religiously for the downright filthy and fun side of things played out by this year’s chancers and jokers.
As a committed viewer, I’ve often wondered whether I could ‘cope’ with life inside – surely everyone has done this – and for the most part, I reckon it’d be a walk in the park. But then I consider months without music – and that’s something I couldn’t do without. Sad, but true. I wonder how they do it? I realise they sporadically get treated to blasts of pop on party night’s which only serve to whet people’s sexual appetite, but this wouldn’t be enough.
I remember fondly, series one when bland Brummie Dean was allowed to take in his acoustic and proceeded to strum G D C chords for weeks on end, ah bless…
Anyhoo, similarly to any avid viewer we all have ways of remembering who’s who: and mine revolves around which scene they’d be musically pigeonholed. So without further ado, here’s the rundown. 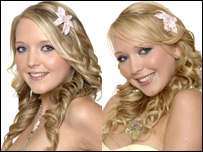 Sam & Amanda: Agh. I mean, honestly, how do these people function on a daily basis. With inane high-pitched cackles resembling dying crows and the awful habit of talking insync thus making it almost impossible to understand a single word, they’re already my least favoured of the 11 inhabitants. Which while it doesn’t mean they won’t be great in the watching stakes, it does mean they’re last on the list to be invited round the Guy household for a view on the latest Titan record.
They’re Summer Bay meets Cheeky Girls armed with over-sized lollipops, all Garlands material without the wit or sparkle. It’s almost impossible to imagine what would be on their stereo other than a diet of throwaway The Hits fodder, but seeing as though they’ve a fetish for all things pink, without any hint of irony its this. 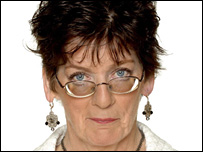 Lesley: I like Lesley. Already she’s asserted a calm assurance and quite clearly given her demure outlook she won’t tolerate any crap. I also dig the way she’s a retired headhunter. Presumably she’s dozens of collected scalps locked up in her country dungeon and will proceed to wax lyrical about how she maimed her victims before carrying out their grizzly demise.
Given the fact that she’s also a failed stand-up comic we’re guaranteed some inner demons and a black rapier-like tongue to be unleashed at some point. Tragically though, Lesley confesses to not liking music, instead preferring to snuggle up with a Dickens novel come bedtime.
With that in mind maybe a small dose of this is appropriate. 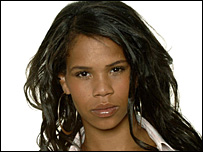 Charley: Ah, it’s Beyonce on the dole. With the attitude of a premenstrual Sugababe and the hobbies of your average RnB diva, Charley is a walking, talking cliche-ridden bootylicious P Diddy video-prancing julie.
Citing parties, money, footballers (she’s cousin of Man U’s Keiron Richardson, like wow!), bling and knickers as her chief interests, she inhabits a world light years from mine.
So while I’m roughing it at a festival, Charley would most probably be found practising her twirls in front of the mirror or pimping her ride with this blurring from an obnoxious 4X4. 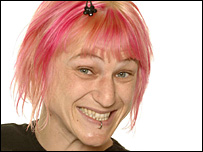 Tracey: Like a cross-breading biology experiment involving Keith Flint, Bez, Jackie Goodie and Mark E Smith gone wrong, Tracey is the product of years of monging out on class As in squats.
Capable only of gurning and blabbering ‘aaaav it!’ our Tracey is usually found up a totem pole in Glasto’s Lost Vagueness field.
But beyond this raving loony veneer, I suspect Trace may struggle amid this zoo of young ‘it-girls’ who’s mountains of make-up will alienate this ‘fresh-faced’ crusty-troll.
I fear Tracey and her technicolour dream coat will struggle to last the distance, but worry not, for while the tantrums kick off in the house, inside Tracey’s head will be spinning to the sound of old school classics. 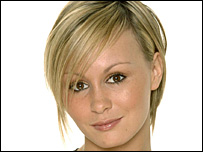 Chanelle: Favourite to be this year’s Grace, Chanelle is all surface no feeling. Her Heat Magazine deal is probably already in the bag due to her vague resemblance to Posh and similarly self-appointed Queen Vic probably wouldn’t know a decent tune if it bopped her on the nose.
Chanelle’s only intriguing aspect thus far is her Grade 7 proficiency in the violin. Maybe there’s more to this one than meets the eye. Doubt it. We all know she’d be happy to listen to Miss Beckham 24/7 but given her ability with the bow I’d much rather imagine her giving it some of this. 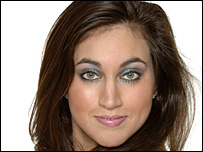 Shabam: Shabba is a Jewish mother away from a new rave Amy Winehouse. She’s also BB’s new-raver. All Klaxon’s flourescent leg-wamers, clashing CSS make-up and a penchant for bouncing off walls. She claims she’s enigmatic, but she appears fairly mundane, which after the freaks and idiots of previous years is kind of refreshing, and it’d be no surprise to see feisty Shabba glosticked up jollying it up to Justice, Shy Child or Digitalism. But it would be far more amusing if it were this. 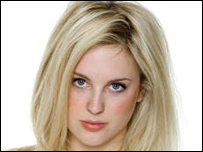 Emily: Emily is hilarious. Despite the fact she lives in a castle, rides around on an 18th Century bicycle, owns 856 handbags and is down with the Tories, she says she’s the ultimate rock ‘n roller. Brilliant!
Plus, little Em has a secret, she’s discovered this brand new music scene – its called indie and they have this really cool band called The Kaiser Chiefs. WTF?!?! If she wasn’t the hottest chick to waltz on to C4 since Cassie from Skins we’d have slammed a rickenbacker across her chops and run off singing What a Waster.
As it is she’s clearly under nourished in the culture stakes and it would be no surprise to see her bopping down the indie disco thinking this is as cutting edge as it gets. 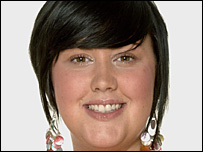 Laura: In keeping with all things Skins, Laura is nine double chocolate gateau’s away from NME’s pin up de jour Beth Ditto.
Her audition video gave her the edge in terms of likeability – humorous, self-deprecating, few cheap gimmicks and indeed genuine. Her only worrying characteristic was penchant for hanging around graveyards and wishing to make ‘dead people look nice.’
Mmmm, maybe she listens to Sunn O))) too. 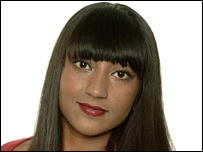 Nicky: Not sure what to make of this one.
Adopted from Mother Teresa’s orphanage by Irish and Anglo-Indian parents, she revealed she hates all men and believes love is for losers. Bit odd that, and one suspects she’s recently been kicked to the curb and is thus on a man detox, but I suspect come Friday when the fellas penetrate BB’s girlie kingdom she’ll be reet back into them.
But for now it seems this gloomy self-confessed cleanaholic’s head is right here. 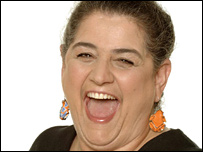 Carole: Ah, the old cockney rebel. Carole thinks she’s a freedom fighter, she’s not she’s a bad joke. Unwittingly and rather endearingly she seems all rather oblivious to how soft she looks lumbering around like an extra from Last Of The Summer Wine; all scraggly jumpers, Jack Duckworth specs and sweaty leggings.
Carole’s political radicalism – she’s not down with the fascism – probably means she aligns herself with the Clash, sadly I can see her having more in common with these wazzocks.
Stay tuned for part two when the BB’s male contingent enter the fray…