Along with the Pyramid Stage sound at this year’s festival, Glastonbury’s other noteworthy absence was the number of young revellers, Getintothis solves Michael Eavis’ dilemma.

Michael Eavis has got problems – and he knows it.
No, we’re not talking about his egg-in-a-nest beard combo or indeed the muffled Pyramid Stage PA, we’re referring to the downturn in youngsters at this year’s event.
It has been evident for several years now that the average age of the Glasto reveller has been increasing and this is due to key several issues.
So what’s Eavis’ masterstroke?
He intends to increase the amount of tickets available through the medium of the telephone rather than the internet. Brilliant!
What revolutionary thought process led him to believe that teenagers are more adept at pressing the redial button than their older generations? By suggesting that the average teen will be able to access those near-impenetrable gateways into ticket sales offices easier than others is a farcical avoidance of the real issues that stop kids attending the best festival in the world. And it’s a trend which has a very real possibility of continuing.
Firstly, I rarely considered attending Glastonbury until I’d left University as it traditionally falls around the Summer Solstice in late June, which means exam period.
I’m not suggesting the festival should be moved but this dilemma has always been an issue, and what with the Leeds and Reading festivals being held over the August Bank Holiday, they clearly present a more viable option to youngsters.
Secondly, there’s the price. In last week’s NME, kids bemoaned paying the ÃÂ£155 while farmer Eavis countered saying price was not an issue. I can see both sides. 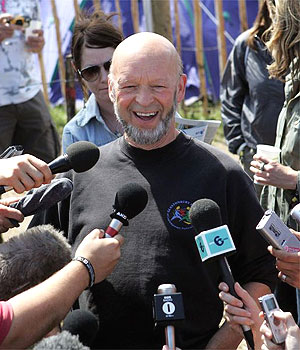 On the one hand there’s simply no question the festival is worth every penny – to see The Who, Arctic Monkeys, Bjork and Arcade Fire alone would leave you little short of ÃÂ£150 – then there’s the gazillion forms of other entertainment and offerings available. But from the kid’s perspective, I know I’d have struggled to pull that type of cash together then make savings for travel and spends. So maybe the kids have a point.
Then there’s the ‘big ‘un’ – how to actually purchase your tickets. Eavis has tried several new measures over the last few years to combat touts resulting in the buyers having to register months in advance before sending in photographs and signatures all resulting in a very personalised ticketing system. All well and good if you’re organised, but for the average kid this is just another measure which makes it harder for them to subscribe to.
If they do follow the correct procedure then the day of reckoning is ultimately still a completely head-frazzling experience as hundreds of thousands log on to the Net or sit anxiously by their phone clicking ‘refresh’ or ‘redial’ buttons hoping on the off chance they’ll strike ticketing gold.
It’s a highly stressful process – one which becomes all the more galling when you find out the BBC alone took nearly 250 guests to this year’s event (just imagine how many corporate whores were also in attendance, while others miss out).
To avoid this chaos some have suggested a lottery is the best solution. I disagree. I prefer to feel like I’m at least giving it a bloody good go. No, I suggest going back to basics.
Bring back the good old days of going down to your local ticketing office and queuing up. Sure, it’s a pain in the arse (and there’s the logistical issue of how many tickets go to each and every office up and down the country) – but this way guarantees an equal chance for everyone – plus it appeals to youngsters.
Unlike the Net were many buyers simply refreshed their screens and bought dozens of tickets for their mates, this way ensures those prepared to tackle the elements come rain or shine will be first in line for a ticket and judging by the recent frenzy for Harry Potter books it’ll be the kids that win out.