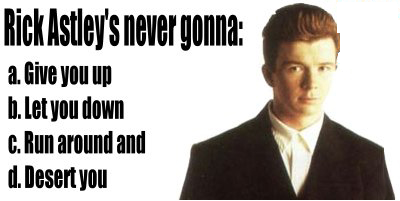 You really have to wonder what ‘culture’ actually means to those in charge of ensuring 2008 is a year to remember for the people of Liverpool.

A quick online dictionary search reveals ‘culture’ to mean: ‘Intellectual and artistic activity and the works produced by it‘.
So, correct me if I’m wrong, but since when were Rick Astley, ABC or Cutting Crew the embodiment of intellectual, artistic activity?
I pose this ridiculous question, after a friend pointed out to me the latest in a short, if spectacularly awful, list of acts that were booked to play our City in our most celebrated year in modern times.
The aforementioned terrible trio are to join Bananarama, Paul Young, Curiosity Killed The Cat and, wait for it… Johnny Hates Jazz at the abomination that is The Here & Now – Very Best of the 80s show at the newly-built Kings Dock arena and convention centre (ACC) – all for the bargain price of ÃÂ£35! I saw Prince play for four hours for less than that…
But that’s not all. No, we lucky, lucky people can also expect mind-expanding sonic trickery from the X-Factor finalists, a galaxy of stars are promised for the extravaganza that is the Number 1 Project, were Atomic Kitten will sing our Cilla‘s ‘Anyone Who Ever Had A Heart‘ and if you were in any doubt that the eyes of the music world will be firmly trained to L1, we’ve the Masters of the Stools (oi, no double entendre intended) –Westlife are back after two years failing in the US to kick off their UK tour in Liverpool. Yippee.
Now I know it is early days (we’ve a full two months before 2008), but surely we deserve better than this. For a City so revered for its creativity and musical heritage we’re in grave danger of becoming a laughing stock – Capital of Culture, should, thus far read: Capital of Cabaret.
Where are the innovators, the creative musical minds, the bands that Liverpool people crave to see – let alone deserve?
The new arena seats 10,000 concert-goers, yet thus far our grand opening night sees us showcase Ringo, former Eurythmic Dave Stewart and ex-Lightning Seed Ian Broudie – all of which have (with the minor exception of the latter who’s lent his production skills to the Coral, among others) barely registered anything noteworthy for over decade.
Which once again begs the question, what is culture? Are we so short-sighted to think that Scousers can only thrive off The Beatles, tribute acts and nostalgia – looking at the list of those down to play, you have to believe the bosses of the Arena and the Culture Company think so.
It saddens me when contrasting the exposure that the Mathew Street festival (a day when alcohol and revelry – not music – is pivotal to the majority’s interest) received when almost axed, compared to the number of hugely successful and artistically-minded events and performances on Merseyside this year.
Here is a City that hosted a sellout two-day Brazilian Music Festival (TrocaBrahma) featuring psychedelic 60s pioneers Os Mutantes in only their second ever UK performance, along with the cream of cutting edge contemporary musicians that the NME would die to host on any given award night.
Then there’s been sellout shows from the likes of Battles, Acid Mothers Temple and Faust – each leading innovators in their respective fields, spanning late 60s to the present day – all of which you could barely bribe venue staff to gain entry to. Then there’s the festivals: Knowsley Hall and Creamfields bringing the eclectic talents of Justice, The Who and LCD Soundsystem to our area. Finally, there’s the hundreds of nights and mini-happenings on Merseyside that those with their fingers on the pulse attend with vivacious fervour.
All of which contradicts the suggestion that Liverpool lacks imagination and creative spirit, and warrants a soulless list of has-beens and wannabees gracing our new arena in this very special of years.
My suggestion would be to contact our very own Julian Cope, a man who is set to feature at this year’s avant-rock festival All Tomorrow’s Parties. Cope, has this year brought out a book, Japrocksampler: How the Post-war Japanese Blew Their Minds on Rock ‘n’ Roll – wouldn’t it be marvellous if he could curate a night of Japanese spacerock at the arena – I’m sure the lights and sound system would be tested a great deal more than on Westlife’s stool-assisted session.
Of course all the events scheduled at ACC will sell, and quite possibly entertain, but is this really the very best we can offer?
All of which, reminds me of former Liverpool resident and music maverick Bill Drummond‘s recent musings on Liverpool and its Culture Year.
He said: “I often talk to the city of Liverpool in my head. When I heard that it was to be Capital of Culture, I said to it: ‘You’re going to blow it, aren’t you?’ I just hope it succeeds, if it does, we will win nothing but the respect of all those who doubted.”
I, like Bill, really hope Liverpool pulls it off next year, but on this evidence, it is not just me and the former KLF star that will be left very disappointed.