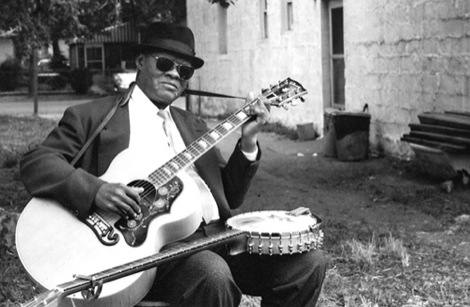 Live fast, die young, Getintothis’ Terry Owen presents his comprehensive round-up of the Blues visionaries who had everything but their eyesight.

Blind Boy Fuller (1907-1941)
The king of Piedmont Blues, Fuller arguably played as big part as any of his contemporaries in shaping modern day rock and roll.
Born Fulton Allen in North Carolina, he lived up to and often surpassed all the stereotypes that are instantly attached to poor travelling musicians of his era – came from a large and broken family, drank like a fish, got involved in the occasional shoot-up, died young.
Although his life was often turbulent, there was never any doubt about the quality of his song-writing or guitar playing.
While Step It Up and Go paved the way for the blues standard, tracks like Rag Mama Rag and Truckin’ My Blues Away showcased Fuller’s outstanding finger picking style.
Despite being totally blind by the age of 28 due to ulcers of the eye (although some claim a jealous ex-lover threw acid in his face) Fuller went on to enjoy success throughout the 1930s.
But the years of excess caught up with Fuller. After a kidney operation in 1940, he died a year later at the age of 33 from a combination of bladder and kidney infections.
Such was Fuller’s popularity when he died, Brownie McGhee, a blues great in his own right, went by the name of Blind Boy Fuller No2 for a short while to cash in on his success.
Top track: Rag Mama Rag.

Reverend Gary Davis (1896-1972)
A protege of Fuller and a native of South Carolina, the Reverend’s (main picture) gruff holler was as distinctive as his exceptional guitar work.
But as blues music steadily lost its once faithful following throughout the 1940s, Davis converted to Christianity and became more involved in gospel music after being ordained as a baptist minister (check out The Sun of Our Life for a 20 minute sermon!).
Despite this, Davis continued to record at home, capturing such gems as Candy Man and was to have a new lease of life with the folk revival of the early 1960s, making appearances at the Newport Folk Festivals.
Criminally, it took until 2004 for some of his finest private recordings to see the light of day on the Early Home Recordings album and featured some of his greatest work such as If I Had My Way and the Uncloudy Day. All rise and praise the Reverend!
Top track: If I Had My Way.

Blind Arthur Blake (1893-1933)
Often dubbed ‘the King of Ragtime Guitar’ little definitive information is known of Blake’s personal life. In fact, there is only one known photograph of him in existence today.
There is even a suggestion that his real name was Arthur Phelps while his place of birth and death have long been disputed.
Although appearing to slur his way through some of his songs , those unfamiliar to his work should look no further than the multi-disc All the Published Sides, for his best work, including the marvellously titled Doggin Me Mama Blues.
Interestingly, there’s even some dispute as to how Blake died.
Drink seems to be the obvious answer as he was no stranger to the bottle in his later years, although there was some suggestion that he was the victim of a car crash.
Top track: Diddie Wah Diddie.

Blind Lemon Jefferson (1893-1929)
Did he fall or was he pushed?
Like Blind Blake, the circumstances of Jefferson’s (above centre) death will forever be surrounded in mystery and intrigue.
Was his coffee poisoned by a jealous ex-lover or did he really freeze to death in a snowstorm? The two possibilities really couldn’t be more contrasting.
Jefferson’s peculiar high-pitched voice and fast playing style marked him out as one of the deep south’s most popular entertainers during the 1920s, often starting a show in the early evening and carrying on until the sun rose the next morning.
Tracks like Matchbox Blues (later recorded by The Beatles) and See That My Grave Is Kept Clean ensured Jefferson’s legacy would live on.
Having recorded hits for Paramount, Lemon found himself in the rare and enviable position of not only owning his own car, but having enough money to employ chauffeurs.
Such was his penchant for travelling, Jefferson’s work could never really be pigeonholed to any one area, whether it be Piedmont, Delta, Southern or any other kind of blues.
But his days were numered. Having only been a recording artist for three years, Jefferson was dead at the age 36.
On a lighter note, Jefferson’s wish to have his grave kept clean is adhered to by the cemetery committee at the Blind Lemon Memorial Cemetary, after the replacement of a new headstone in 1997.
Top track: Jack O’Diamonds.

Blind Willie McTell (1901-1959)
A doyen of the 12-string guitar and a novelty in blues circles in that he survived beyond the age of 40.
Like Blind Lemon, McTell’s distinctive high pitched voice won him audiences and his influence has spread far and wide.
Bob Dylan, Nirvana, The White Stripes and The Allman Brothers Band are just a few artists to commit their appreciation of McTell to vinyl.
Born blind in one eye, it was almost inevitable that McTell would sooner or later have the other one to match.
Like Blind Boy Fuller, many of McTell’s recorded sides leaned towards upbeat country blues, rather than the darker Delta form of blues of the early 20th century.
Despite ill health, McTell continued to play live in and around Atlanta before his death from a stroke.
Top track: Southern Can Is Mine.

Sonny Terry (1911-1986) and Brownie McGhee (1915-1996).
Hardly a match made in heaven as the pair apparently loathed each other in later years.
But the winning combination of McGhee’s steady guitar rhythms, coupled with Terry’s brilliant harmonica playing, quickly got them noticed in the early 1940s.
Both had befriended and played with Blind Boy Fuller (Terry’s unmistakable whooping can be heard on several tracks).
Blinded in one eye at the age of five before losing sight in the other at 18, Terry was determined not to let his disability beat him, so he took to the streets with his precious harmonicas, first meeting McGhee in North Carolina in 1939.
The pair relocated to New York where they were often joined on the blues and folk scene by the likes of Leadbelly (aka Huddy Leadbetter) and Woody Guthrie.
The pair continued to record and tour together, laying down such stand out tracks as Big Legged Woman, Custard Pie Blues and Whoopin The Blues until they fell out in the 1970s.
Both went on to record as solo artists and toured on a regular basis.
Sonny Terry’s amazing harmonica talents have been brought back into the public conscience recently with his Whoopin The Blues being featured on the current EON television advert.
Top track: Whoopin The Blues