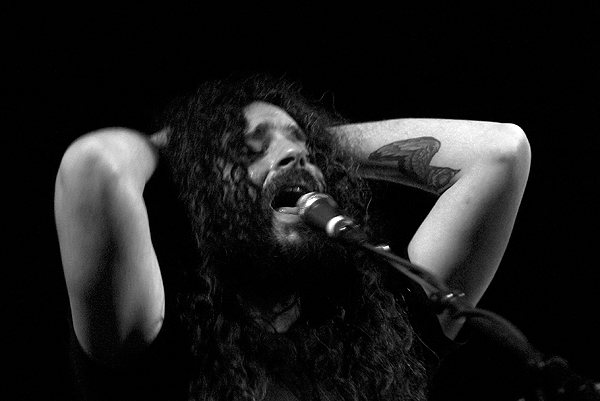 It has been three dark years since Montreal collective Thee Silver Mt Zion delivered their last audio broadside. Now they’re back, and recounting how the world is an even scarier, more threatening proposition.
Getintothis caught up with their creative tour de force Efrim Menuck ahead of the release of their sixth record 13 Blues For Thirteen Moons to talk about Chinese astrology, US political circuses, loud guitars and how the music industry wants to turn musicians into comic book characters.

Getintothis: Going back to the record, I spoke to Kevin Laing of Besnard Lakes during their last tour and he spoke of how incredible, and how rocking the new material was when he heard you guys playing in Breakglass studios. Can we expect even heavier stuff in the future?
EM: We’re working on a couple of new songs right now, and one of them is pretty heavy and the other one is not.
But I think we’ve written so much new stuff in the last couple of years and I think we’re all kind of feeling like we need to take a one-year break from writing new stuff as you always run the risk of repeating yourself.
Getintothis: What has influenced you in the last couple of years? Its been four years since the last record…
EM: It’s four years since its inception, there’s the lifetime between recording a record and then coming out – its getting longer and longer and longer, you know. It’s been four years since we recorded it.
I don’t know, it’s like as usual we’re a strange band in that we are mostly influenced by trying to figure out what the hell we’re doing – it’s such a stubborn crew of characters that our basic influences are compromised by whatever we can eek out.
Touchstone-wise its always the handful of contemporary bands, and a pile of older bands we refer to either positively or negatively, when we’re writing stuff together.
Getintothis: Who would that include?
EM: Negative – well you always have to avoid the sense of U2 – which I think every band ends up committing every now and then – which is sort of a manipulative emotionalism, you know what I mean? And positively, we’re all big fans of Deerhoof, there’s a way they unpeel a melody so its the oddest sounding thing in the world that we’re always excited whenever we can even hint at that.
And then we’re Canadian – so we’re huge Zeppelin fans! In a very straight up for real way.
Getintothis: What did you make of the big palaver of the reunion?
EM: I don’t know, from all accounts it seemed like they played well, I think it would be a shame if they go and do this tour now.
Getintothis: It seemed like a great set for the uber-fans and the usual blaggers…
EM: Totally. I hope they don’t (tour) – they’re one of the only ones that haven’t fucked up their heritage and it would be a shame if they ended up (touring) – it’s not like they need the money.
Getintothis: What do you make of the political climate in America as the whole world’s media focuses on the Barack Obama v Hilary Clinton circus?
EM: Its curious as I’ve never… Even the slim chance that Obama is going to win the leadership and then maybe the Presidency is kind of a big deal, in the context of America. So that’s interesting.
I remain cynical – that entire political process, down there, is completely from top to bottom like, rigged. Maybe that’s too strong a word, but it definitely privileges a certain type of millionaire, I remain cynical about the possibility of real change happening. But I think its interesting as a drama. 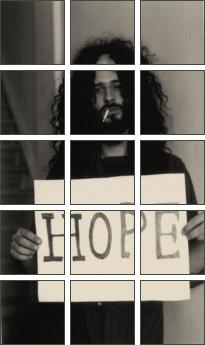 Getintothis: I suppose it shows some wind of change in the political climate in America?
EM: Definitely. I mean there’s a lot of bureaucratic, union forces in the States that have always picked Democrat party insiders – and it’s interesting that they’re so frustrated with the state of affairs that they’re willing to bet on an outside shot.
Getintothis: I take it the current political activity in the States kicked off way after the writing process of the new record?
EM: The bleakness of the last, not just Bush, but Blair too and our own prime minister, all the way back to September 11 – the terrible bleakness of world affairs of the last eight years, last year it definitely felt like everyone… You reach this point were you couldn’t air it anymore, it was unceasingly hopeless.
Getintothis: I suppose being Canadian its even more in your face over there?
EM: To a degree, yeah, I mean it’s more… I don’t know if its more in your face UP here, it’s more in your face when you’re DOWN there. I don’t think it’s anymore in our face than it is in your face.
Getintothis: So, outside of music, how does Efrim relax?
EM: That’s a good question. I don’t do a lot of relaxing. I walk my dog; have dinner with my girlfriend. Normal stuff.
Getintothis: There’s still quiet a lot of enigma wrapped up in yourself and your band – which is a rarity in contemporary music. We know what every band’s had for breakfast these days. Do you think it’s still important to retain that enigma in pop music?
EM: I’ve never been interested in that idea. It’s like somehow a need that I think, for the most part, music magazines have. They need to create these strange mythologies around bands and there are different categories and one of those categories is the ‘mysterious outsider’ and with Godspeed we hated that.
We were always more interested in… *long pause*
Getintothis: Communicating?
EM: Yeah! And not buying into any variation on the star myth, you know, and so part of that is being up there warts and all. And so with Mt Zion, we’ve also like… That’s part of the reason why everyone in the band sings – whether everyone in the band can sing in tune or not – we don’t want to infuse any aspect of what we do with any type of glamour.
Getintothis: It’s a contradictory situation. I remember when NME ran the front cover feature on Godspeed (July 24, 1999) – and there was an intention on the magazine’s part to build up this enigmatic strange spiritual presence…
EM: Yeah, we had this strange engagement with the media because we didn’t want band photos.
Getintothis: That’s because you didn’t want the generic band photos?
EM: That’s it! I mean we didn’t want… We had an understanding distrust of the music media. We had all seen what it had done to bands and the kind of bands they privileged and the kind of bands they didn’t. And we just had no interest with engaging with it at all. Mt Zion continues to have mostly no interest in engaging with it (the media) all, but because it is a different group of people we’re a little more pragmatic about it.
And also if you don’t have band photos then it lends itself to that type of mythologizing we’re trying to avoid. So… *pauses*
Getintothis: …We can expect fold out Silver Mt Zion posters popping out of record sleeves to shortly be decorating teenagers bedrooms across the world!
EM: *Laughs* Exactly!
Getintothis: I don’t suppose you’ve ever been to Liverpool, what does it conjour up, the Fab Four?
EM: No! I wasn’t going to say that! Nooo, we’ve never been, it’s an industrial town right?
Getintothis: Yeah, lovely waterfront, great people – you should come! Are you due to tour? You’ve played Manchester a few times…
EM: I would rather play Liverpool then Manchester.
Britain is becoming a harder and harder place to tour – I think.
Promoters are becoming more and more fickle – and promoters are becoming more and more out of touch.
It’s a more and more common thing that promoters literally first look to see if you have a myspace page and then see how many myspace friends you have and then decide what kind of gamble they wanna take based on that.
And obviously for a band like us we’ve got no official myspace – our internet presence is a bunch of wrong stuff on Wikipedia or a handful of misquotes that will come up when you Google.
Getintothis: Does that bother you?
EM: The internet bothers me, yeah, what bothers me is there’s a lot of wrong information out there that you end up having to respond to or address – it just takes up a huge chunk of your life trying to correct.
Getintothis: Well, I can’t recommend enough the Liverpool Philharmonic Hall – it would lend itself to your style of music…
EM: It’s a sit down place?
Getintothis: Yeah. Great acoustics etc.. So if you wanna let your booking guys know!
EM: *Laughs* Yeah, yeah, will do!
Getintothis: I’ve got the most ridiculous, silly question to end on. It was posed by a friend of mine who’s a super-fan of both Godspeed and Silver Mt Zion, so brace yourself. Did Silver really mount zion? Or was it just a cruel rumour circulated by the Committee of the 300?
EM: *Laughs* What the hell does that mean?!? Wow – Silver absolutely mounted zion.
Getintothis: He did! Oh really, from behind?
EM: *Takes a drink* Uhuhuh…No, from the front!
Getintothis: Ah, a good catholic boy. On that note, I’ll be off – it was great speaking to you Efrim, and hopefully I’ll see you in the Philharmonic Hall sometime…
E: I hope so. Thanks.
13 Blues For Thirteen Moons is released on March 10 in Europe and March 25 worldwide.
Thee Silver Mt Zion Memorial Orchestra & Tra-La-La Band
Constellation Records: A Silver Mt Zion
Unofficial Silver Mt Zion fansite w/ music