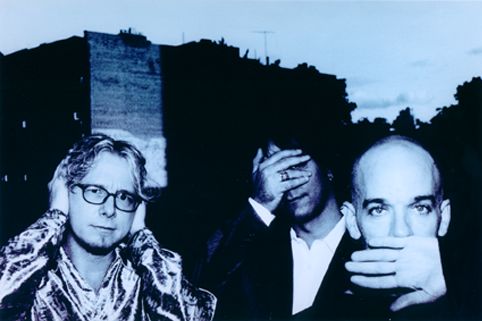 …but compiling this list, if I’m honest, became close to torture. The simple fact is it would have been far easier to pick a top 10 weak tracks, such is their scarcity.
As it was, I whittled down a top 25 and was then stuck. Any could have made the final cut. In the end, I’ve plucked a wide selection of tracks throughout their incredible career.
So, where Murmur‘s Laughing and Shaking Through were almost dead certs for inclusion they’ve in the end made way for other tracks equally as impressive but from their later days.
The same can be said for almost every period – It’s The End of the World As We Know It, Cuyahoga and from their mid-IRS years, and World Leader Pretend, Drive and Imitation of Life from their Warner days were all close to making it past the post.
In the end though, ruthlessness and sheer ‘what the hell, it’s just another frickin list,’ desperation resulted in this: the REM Top 10.
Just don’t expect it to be the same this time next week.
1. Fall On Me – Lifes Rich Pageant


Everything that encapsulates REM is in Fall On Me. Soaring melodies, gorgeously garbled delivery, overlapping vocal harmonies and a simple, but profound message. These three samples taken from 1985 (in live demo format, with alternate lyrics), 1990 (Green Tour Film) and 2001 (live in Rio) show how the band has evolved in nearly three decades, each capturing a band finding new ways to communicate and entertain.
2. 9-9 – Murmur

My favourite track from my favourite LP. Primal and beat-up, 9-9 is REM at their most instinctive, raw and impenetrable. What it’s all about is anyone’s guess.
3. Begin The Begin – Lifes Rich Pageant

Their greatest album opener is the sound Peter Buck carnage, all gnarly, twisted string-snappers while Mike Mills underpins the whole bluster with a devastating rumble. Any fan that’s not heard them deliver this live is missing a treat and a half.
4. The Sidewinder Sleeps Tonite – Automatic For The People

Pure pop fun inspired by The Lion Sleeps Tonight, with perhaps the most mis-translated line in pop history.
That line – Call me when you try to wake her up, call me when you try to wake her, I can always sleep standing up – is repeated 32 times in the song.
Fact fans: When trying to name check Dr. Seuss in this song, lead singer Michael Stipe kept saying ‘Zeus.’ The laughing that can be heard on the track is Stipe laughing at his own inability to pronounce that correctly.
5. Harborcoat – Reckoning

There are so many off Reckoning – Camera, Pretty Persuasion, So. Central Rain – but in the end I plumped for this. Dig Michael’s hip-shaking excellence from this ’85 footage in Germany. R.E.A.C.T.
6. Nightswimming – Automatic For The People

Electrolite, Perfect Circle and At My Most Beautiful are great but this is the quintessential Mike Mills piano lullaby with Stipe also in achingly romantic top class form. Check how the word ‘recklessness’ is split into three syllables but two words; it’s all in the finer magical details. This is a 2006 version from Jools Holland‘s Later and you can almost hear the sploshes from the skinny-dippers.
7. Sitting Still – Murmur

Another favourite from their debut, all Byrds-meets-Smiths jangles with Stipe’s added back of the throat growling reaching an all-time high.
8. Leave – New Adventures In Hi-Fi


Perhaps, REM at their most innovative. This track from fan-favourite ’96’s New Adventures has been used to soundtrack a Life Less Ordinary and Lost commercials (see fan clip above).
This is one of those tracks, the first time you hear it, you instantly reach for the sleeve to check what its called, what number it is – and store for repeat playback. I’ve included the Lost clip purely as it contains the acoustic opening before the mighty sonic waaaaaaaaaaaaa!
9. Orange Crush – Green

A song that reminds me of great days in college and the first time I saw REM live at Huddersfield’s newly-built McAlpine Bowl. Support on the day came from The Beautiful South and Belly. While the rest of the tour included a relatively new band called Radiohead.
They literally rocked the new stadium to it’s knees, and when Stipe lifted up the megaphone for this barnstorming riot the place went ballistic. Contains Bill Berry‘s best stick work too.
10. Great Beyond – Single (from Man on the Moon OST)

Perhaps their greatest single in recent times accompanying the much under-rated Man On The Moon film from 1999. Life doesnÃ¢ÂÂt get much better Ã¢ÂÂ or surreal Ã¢ÂÂ than standing in a field with 70,000 people singing at the top of the voices, Ã¢ÂÂIÃ¢ÂÂm pushing an elephant up the stairs, IÃ¢ÂÂm tossing out punch-lines that were never there, over my shoulder a piano falls, crashing to the ground.Ã¢ÂÂ