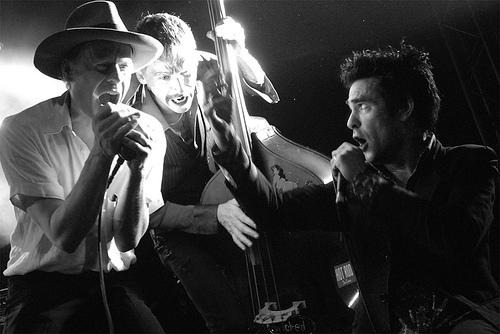 Terry Owen appreciates the simple things in life. Son Of Dave is one of ’em.

When it comes to keeping things mind-numbingly simple, look no further than Son of Dave.
Having released his debut solo effort 01 in 2000, SoD waited six years before delivering 02.
And now, not to break with predictable continuity, 03 has completed a hat-trick of the most unimaginatively titled run of albums ever.
While the same level of bone idleness could have been tilted towards Led Zep for their first four long-players, any further accusations of SoD having a canÃ¢ÂÂt be arsed attitude end here.
This is because 03 is an absolute cracker.
Attired like a 50s CIA operative whoÃ¢ÂÂs just jumped out of the pages of a James Ellroy novel, Benjamin Darvill has completely reinvented himself as a wisened old bluesman.
A former member of the transatlantically successful Crash Test Dummies in the early to mid 90s, SoD no longer finds himself playing second fiddle in a supporting role. Centre stage is now his.
Thanks largely to artists such as Seasick Steve and the ever popular but forever underground Black Keys, blues music is enjoying well deserved exposure in the spotlight, and Canadian born SoD is doing his level best to do his bit for the cause.
Foot-stomping harmonica and thudding basslines that could burst the eardrum of an elephant at 20 paces mark this release out as a surefire entry into the end of year albums of 2008 lists.
But while the likes of Seasick approach the blues with production and perfomance stripped down to the bone, SoD adds that little bit extra with loops, beats, howls, grunts and the occasional swearword, creating a sound that you might expect at an Alabama 3 after show party.
With barnstorming gob iron led tracks such as Old Times Were Good Times and a scintillating cover of WarÃ¢ÂÂs Low Rider, the scourge of many a TV car advert, Mr Darvill has counjoured up an album that demands attention reaching beyond the respect of the few remaining rock and roll publications that are actually worth reading these days.
Exposure could be a very good thing for Dave, having toured these shores with Supergrass, while the likes of Jools Holland and Mark Lamarr have both stated a keen admiration for DaveÃ¢ÂÂs music.
Apparently, one of DaveÃ¢ÂÂs ambitions is ‘to be better than The White Stripes‘.
While it seems unlikely heÃ¢ÂÂll ever match the Stripes for commercial success, few can argue that his music efforts are inferior. Go buy.