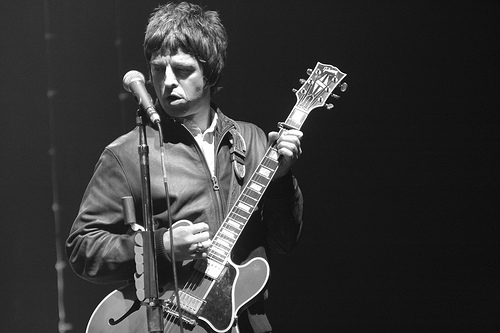 Those were the words of a beaming, yet reflective teenager after watching Oasis in for the first time.
Back in the day it was all so simple. Bish, bash, bosh and out for a few more ales. Nowadays it’s a different affair.
Exemplified by the new record, Oasis, are a band in transition, and tonight rams home the point. Here is a band that has such a vast catalogue of heavyweight tunes, and yet it wants so much to forget and prove they’re still fighting fit.
There’s no way the Manchester Machine can please everyone – and similarly to REM when they played Old Trafford Cricket Club earlier this summer where Everybody Hurts, Nightswimming and Country Feedback made way for newies and golden oldies, Oasis tonight ditch Live Forever and a whole host of big guns while putting a new bent on affairs.
And seemingly Liam, for better and worse, holds more cards when picking the setlist, so the swamp of bodies swaying and bouncing uncontrollably are treated to rare outings of bombast – an incredible My Big Mouth and an incendiary Slide Away two obvious star turns – but they’re backed with underwhelming tub-thumpers The Meaning Of Soul and Ain’t Got Nothin.
Indeed, the mix is added to further with Gem Archer‘s sitar and spittle-assisted To Be Where There’s Life and a whole host of Noel-led tracks.
Where in the past Liam would monkey-walk off for a mini break tonight he has several as an incredible brace of big brother beauties The Masterplan and Don’t Look Back In Anger are added to by the inconsequential The Importance of Being Idle and The Falling – a track which is the undoubted highlight of Dig Out Your Soul, but tonight sounds a tad lost as an encore, missing the swirling production of the record.
Of course there’s live staples – Lyla, Rock ‘N’ Roll Star, Morning Glory and a throat-shredding Cigarettes And Alcohol which ensure non-stop action in the stalls.
It’s a credit also to Liam, who given his diet of salmon, jogs and school runs, gives probably his finest vocal displays since 1995.
The power has never wained in that mighty throat, but in recent times the soaring restrain has dissolved into a blocked chimney of fug. But tonight, exemplified best on Champagne Supernova and the aforementioned, heavenly Slide Away, the high notes are glistening with resolve and passion as he drop shoulders, stands bolt straight and shouts at the front row. It’s clear how much the younger Gallagher lives for nights like this.
And the feeling’s mutual for Liverpool; with Tranmere supporter and Wirraler Chris Sharrock more than able on the kit, the nifty Lennon lift on I’m Outta Time and a feedback-drenched closer I Am The Walrus, the Scouse connection is complete.
And while there’s no room for Live Forever, it seems certain that this band in transition is moving in all the right directions.
Setlist:
‘Fuckin’ In The Bushes’
‘Rock ‘N’ Roll Star’
‘Lyla’
‘The Shock Of The Lightning’
‘Cigarettes And Alcohol’
‘The Meaning Of Soul’
‘To Be Where There’s Life’
‘Waiting For The Rapture’
‘The Masterplan’
‘Songbird’
‘Slide Away’
‘Morning Glory’
‘Ain’t Got Nothin”
‘The Importance of Being Idle’
‘I’m Outta Time’
‘My Big Mouth’
‘Wonderwall’
‘Supersonic’
‘Don’t Look Back In Anger’
‘Falling Down’
‘Champagne Supernova’
‘I Am The Walrus’