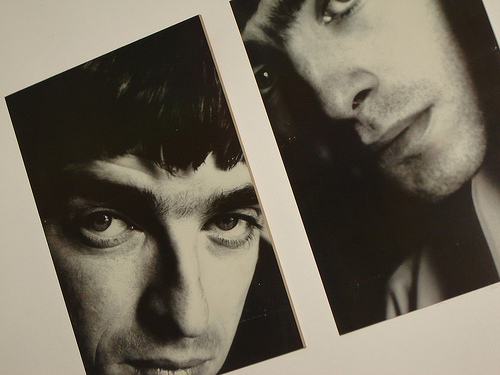 Peter Guy introduces a week of worshipping at the altar of Saints Noel and Liam.

Holy Ghost Revival made an acute point last week. Having decamped in the UK for the past fortnight the hotly-tipped Seattle bunch told a reporter how they were here to tear it up and unite the masses as the live circuit was lifeless – and that it was down the pubs in England were it was all going off.

They recounted how it was supporters watching football that captured what they were searching for: soul, action, drama, adrenaline and excitement.

And it got me thinking; I’ve seen some phenomenal gigs – Prince, Mars Volta, Faust, Godspeed You! Black Emperor immediately spring to mind – but nothing – absolutely nothing – compares to the mass coming together and hysteria of the Oasis phenomenon.

The comparison with the football terraces has been made before. But Oasis’ appeal extends beyond. Sure, their cultural relevance, artistic merit and indeed power to obliterate the senses has diminished somewhat since their mid to late 90s heyday but their magic to unite hasn’t faded one jot.
Oasis were, and still are, a faith – a special brand to believe in, and an inspiration – for better or worse – for a great many people. Familiar to millions, indeed.

Back in late 94 Oasis made the first ripple in my hometown. In General Science, Vicky Hall passed on a tape of Definitely Maybe; I copied it that night while lying on my bedroom floor (it had to be returned the next day as others impatiently waited in line) drawing images of the band on the inside inlay and listened to it boom out – all tinny white heat on my Saisho soundsystem. It made an instant impression – I think Up In The Sky was an initial favourite – and would go on to dominate my stereo, banishing Nirvana, Pearl Jam and Soundgarden to the background. And I wasn’t alone.

The entire class – the scalls, the Iron Maiden and Pantera gang, the loners, the first to be picked for the footie team, the dickheads and everyone in between, soon got in on the act.

Weeks later Claire Baxendale was leading the charge of rounding up a crew to see them at the Royal Court – I somewhat foolishly passed as I had a family do at my nan’s (god rest her soul!). And the next day in RE the superlatives were gushing as Mrs Atherton attempted to stem the fervor. Fat chance.

The record dominated a school trip abroad, sessions of their acoustic demos titled Undrugged, were passed around like uncut diamonds – Noel’s beautiful take on You’ve Got To Hide Your Love Away a real delight – while the Wibbling Rivalry 7″ was a must-hear for everyone – after all where else could you hear real pop stars peppering the airwaves with expletives and threatening to kick each other’s heads in.

This was genuine, uncensored, primal rock and roll. And everyone wanted a part of it.

The furore followed throughout the decade as Oasis’ influence snowballed to college where John and Danny chopped up lines of what looked like baking soda with their bus passes.

The rest of us meanwhile, reserved our Oasis appreciation to more sartorial indulgence as Adidas, parkas, Wallabees, and vintage Fred Perrys became the new uniform and hair cuts became important for the fellas as well as the females.

Sure, Kurt Cobain had for a brief period inspired tetchiness and more than a fair few plaid shirts, but staggeringly five Mancs, including a baldy twat playing rhythm and a pube-headed ‘drummer’ were inspiring millions to make it happen. Soon half the college was on a coach to Knebworth – where the fuck was Knebworth?

Suddenly everyone knew how to play D’You Wanna Be A Spaceman – berks who six months earlier had asked me which one was Pink in Floyd were bringing their acoustics to the canteen; sitting on tables attempting to impress with their inability to play the intro of Slide Away as Wiganer’s Dylan and Sean were sowing future-seeds to start up their own music enterprise.

And it wasn’t just teenagers that were crowding round episodes of The Word, The White Room, Top of the Pops and the Six O’Clock News as the Gallaghers fought it out with Damon’s Blur. Parents, professionals, politicians and Prime Ministers were gegging in. Britain was Oasisville.

Years later, and Britpop is the cat perennially kicked – and Oasis as the movement’s self-appointed leaders are the most derided. But there’s simply no escaping that those were heady, great days, and it’s often those at the epicentre of the madness, that have shaped careers from the thrills and spills, that look to massacre it most.
Indeed, Love Like A Bomb is no Live Forever, but there’s been enough killer cuts from their last three records to warrant close inspection and live they’re near unstoppable.

At Manchester City’s Eastlands Stadium on the Don’t Believe The Truth Tour, they sounded the best I’ve ever heard them – and indeed from the start of the gig where the barriers collapsed resulting in a 30-minute delay which saw Noel and Liam do stand-up, until the closing My Generation as 40,000 plus pogo-ed as one, it proved their enduring appeal.

Oasis are no nostalgia act, they’re certainly no has-beens – read any interview and you can’t fail to be entertained – and it’s that which is key. Entertainment.

Today, Oasis still appeal simply because they’re a winning force of unbridled passion and this passion is mirrored by those who remember how it all began and hopped on for the ride, and come closing time still sing along to every word on the jukebox. Amen to that.