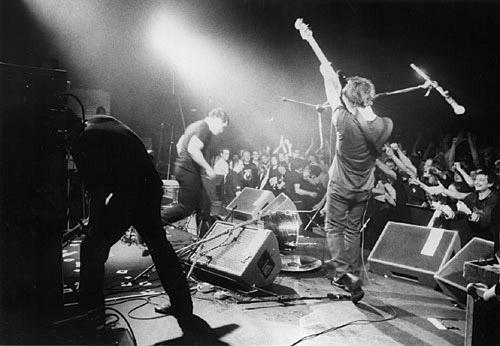 A band rediscovering their sense of purpose, Matt Eland finds comfort in the return of an old favourite.

The last time ToD were in the north west it was in support of their badly received 2006 album So Divided; they only played one tune off it because all the parts had been recorded separately to click tracks and they hadn’t learnt them afterwards.
An odd choice since they got big on the strength of their chaotic live shows. And the albums lyrics – a torrent of negative invective that suggested a band once on the cusp of greatness was ready to pack it all in. The ‘greatest hits’ vibe to the set seemed to confirm this.
Three years later and they’re back in support of their superior Century of Self album – they’re ready to rock again, and an opening salvo of Giants Causeway/Far Pavilions/Isis Unveiled proves they’re very much of the here and now.
Drummer Jason gets so carried away he manages to tear his snare drum. The biggest cheers of the night come from the Source Tags and Codes album, but it’s when they jam Clair de Lune and Totally Natural together that they hit top gear – mixing their prog tendencies with their more straightforward songs, teasing the audience into sudden, full blown cohesion.
This is the great advantage of a band well into their 13th year – they trust their older songs so implicitly they aren’t afraid to take them in new directions.
But by the same token, the addition of new personnel – drummer Aaron and keyboardist Clay – means that there’s more of a swagger to Will You Smile Again for Me, even in its hammer-strike-metronome moments.
If there’s a downside it’s that they don’t really get off the beaten path into their back catalogue, and they don’t indulge some of their quieter moments.
Obviously they’re mainly about bombast, but it would be nice to hear some of the stuff off Century of Self that doesn’t perforate your eardrums.
Because of this I’m left with a sense of what might have been, but mainly I’m just grateful that one of my favourite bands has, once again, a sense of purpose and a future.

Trail of the Dead: Isis Unveiled