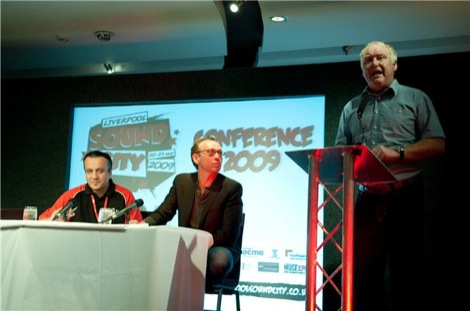 We’re in safe hands… Some might say. Alistair Houghton reports

THE FUTURE of the music business is still bright despite the changes the industry has seen in recent years – that was the message from leading players at Liverpool Sound City.
The music festival brought together a host of execs and industry players with a series of debates at the Hard Days Night Hotel.
The conferences were designed to give Liverpool musicians and promoters the chance to debate the state of the music industry with some of the sector’s key players.
One of yesterday’s highlights was a debate called ‘Fix Up, Look Sharp for the Time Machine‘ on the future of the UK music business.
It saw panellists, including writer and rocker John Robb and leading manager Jonathan Shalit debate issues from the mobile internet to the merits of Simon Cowell.
Shalit, whose company Shalit Global looks after artists including Myleene Klass and N-Dubz, said: “The music industry right now is in one of the most exciting positions it has been in since the Beatles came out of Liverpool. If I look at Britain, I see the largest diversity of music I’ve seen in my working lifetime.
“British artists are breaking around the world. The technology that takes music around the world is making music available to everyone to help give artists who had found it very hard to get attention of people who make decisions a very strong platform.
“Everybody is talking about the negatives but they’re wrong, it’s a positive time.” 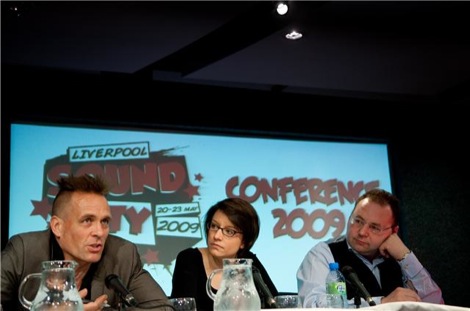 The panel at the Hard Day’s Night.
Robb said he enjoyed watching the mainstream music industry “panic” and said the most exciting music was coming from underground scenes, not from record labels.
He said: “It’s a bit like the Wild West – there’s no rules at the moment.”
Ellie Giles, A&R at record label Fiction, added: “It’s an exciting time for anybody who’s entrepreneurial and wants to make things happen and wants to change things.”
There were good-natured but heated exchanges over how important Simon Cowell was to the music industry.
Mr Shalit – who said he had recently dined with Cowell – praised Cowell’s success in bringing together music and television.
“Those who knock Simon are in the wrong business,” he said. “He demonstrates to any young person in the music business what it is possible to achieve.”