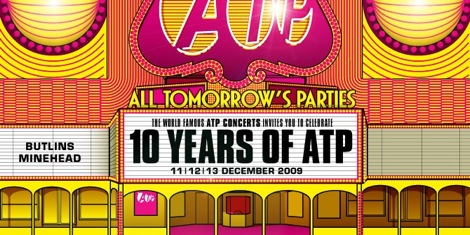 All Tomorrow’s Parties has long stood for excellence – but for their 10th Anniversary wallop in December they’ve really pushed the boat out.

Battles. Fuck Buttons. Dirty Three. Lightning Bolt. Yeah Yeah Yeahs. Shellac.
The line up for ATP’s 10th Anniversary celebration on December 12-14 already read like a shopping list of the finest sonic performers both on wax and the stage before this week’s additions.
Then the organisers announced that Beefhearts Magic Band and Sunn O))) would be playing – the latter a double set consisting of run throughs of early diamond The Grimm Robe Demos and their latest tour de force Monoliths & Dimensions.
And, just when you thought things couldn’t really get any better – they only go and add The flippin Mars Volta.
The last time their played – during their 2003 curatorship – the nearly blew to bits the ballroom at Camber Sands with a three and a half hour marathon of white-hot fusion.
If their set come December is even half as good, we’ll be just as chuffed.
For now, if you haven’t already, snaffle up your chalet tickets here. And if you have already, it’s sweet dreams til December.