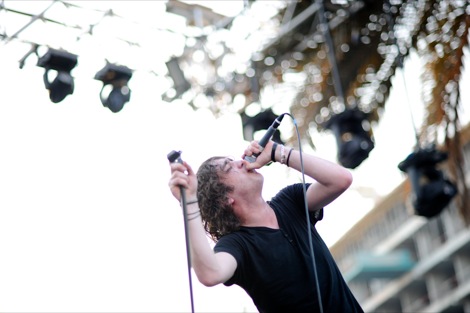 Sam’s a lucky guy. He works for Sony. Manages bands. Has a fine taste in shoes. And best of all a relative’s just offloaded a loft full of prog vinyl for him to work his way through.
He’s loving Van der Graf and Crimson. WE Ã¢ÂÂ¥ SAM.
His luck extends to being mates with Sound Of Guns. Not only are they Evertonians but they specialise in fine rock & roll. And there really aint a lot of fine rock and roll around at the mo’.
So much so when conversation turns to how the US is shitting on the UK in today’s music stakes, it’s easy to see how the Guns have every bit of potential to fire a ruddy great big rocket up Brit rock’s arsehole.
True, they’re hardly revolutionary (you’ll have heard more or less every bit of today’s set in Let It Bleed) – but they’re treading the right side of Primal Scream‘s retro cliches.
It’s a dangerous game, but they’re winning.
It helps that in lead singer Andy Metcalfe they’ve a Jagger meets Plant by way of The Music’s Robert Harvey; all raspy skyscrapers pinging off the glass towers surrounding the Irish Village.
Every track is a blockbusting anthem with ‘single’ rubber stamped on it’s sandblasted denim behind. While the forthcoming re-release of Architects, in particular, should do some serious damage.
Today it’s over too soon, and Sound Of Guns have posted another victory for Liverpool and Dubai Sound City – people will dig this.
Presuming they turn off Post Merriweather Pavilion, that is.
http://www.myspace.com/soundofguns