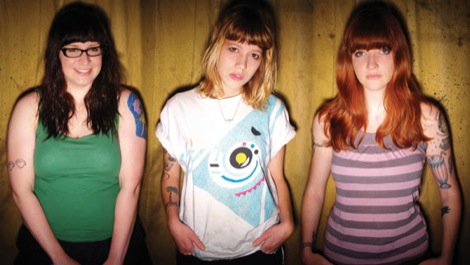 Andy Kelly finds a new love to wash away the January blues.

A dreary Monday night in a dreary January in what has been a particularly dreary start to the year.
Nothing better then than finding a new band to love to finally kick start the year.
Step forward Veronica Falls, main support to the Vivian Girls at Korova.
The two-boy two-girl four piece had smiles spreading across the faces of the downstairs basement crowd as a tangible “this is pretty brilliant” feelin’ hit the floor.
A quick Google search next day reveals they’ve spent some time in New York City and there’s a real Velvets feel to the rhythm section, coupled with a vocal which starts out like it’s come straight out of Siouxie Sioux‘s bat cave, all glacial and distant, but swiftly can’t help morphing into soft warm harmonies reminiscent of My Bloody Valentine on Isn’t Anything.
A couple of tracks threaten to remind us of the majesty of that Wedding Present guitar solo on Kennedy but merely tease before heading off on their own sublime way.
The band are now London-based apparently and formed out of the ashes of several others round the famed Glasgow Art School, if you can believe what you find on the Net, but I’d definitely flag them up as contenders for 2010.

Veronica Falls: Beachy Head (live)
I’d love to say more about the hotly-tipped Vivian Girls but I’m afraid we only heard five tracks, thanks to the late start time and the need to hit the last Merseyrail rattler or make it a very expensive cab home.
The all-girl Brooklyn three-piece didn’t help by spending five minutes discussing the sound in their monitors but once they hit their stride it was a real pity to have to leave them early.
They start like a throw-back to those early-90s Rrrriott Grrrl bands which made young girls with guitars such a cause celebre; loose and garagy before their two minute pop-punk confessionals again let loose some cracking harmonies with a real dreamy feel to them.
I saw enough to think I’ll be tracking down a copy of last year’s Everything Goes Wrong album pretty soon.

Vivian Girls: Moped Girls
Earlier a short set from Barbieshop, a Liverpool all-girl acapello trio who do their own take on classics like Creep (‘here’s where you start to hate us‘), Teenage Kicks and The Cure‘s Close to Me (a bit too like Fat Bob’s whispered vocal original).
Complete with incredibly well-synchronised hand claps, twists and foot stamps, not a single sigh is even wasted. Barbieshop look good and are clearly well-drilled but I couldn’t help wandering what the point was after a little bit – a covers band is a covers band, however you dress it up.

Barbieshop: Creep live at Korova
However, whoever the Beeb gets to replace Jonathon Ross should track them down immediately as their new house band as they’d be perfect for those Four Poofs and a Piano-style musical intros. Big money awaits!
Earlier LIPA graduate Carrie Hayden and a three strong band of pals launched things on an enjoyable country-tinged singer-songwriter vibe.
Carrie’s undoubtedly got a strong voice but whether it’s going to be distinctive enough to separate her from the masses I couldn’t say on this evidence. A bit KT Tunstall mused young Guy (what does he know? – Fact Ed) without any word of criticism and you couldn’t argue.
I think some even sparser arrangements might produce more genuinely shiver down the spine moments in the songs.