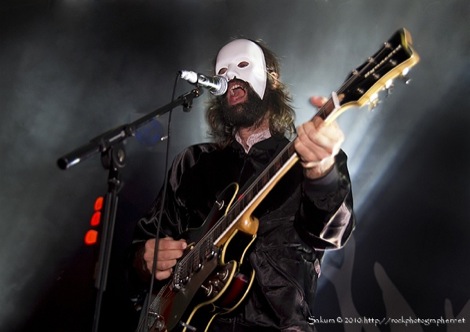 Miike Snow’s got 99 problems but fun aint one.

Miike Snow are highly problematic. Firstly, that name. Whoever came up with that needs a jolly good hiding.
‘Yeah, Miike Snow… It’s a band, not a person… With two ‘i’s’ – I know. Rubbish…‘
Straight away you’re on the defensive. Faces screw up. Part derision. Part confusion. Like an angry pensioner having a stroke while struggling to pass a stool. Why should you have to justify watching a band with the worst name since Another Level? At least they didnt arse around with vowels. 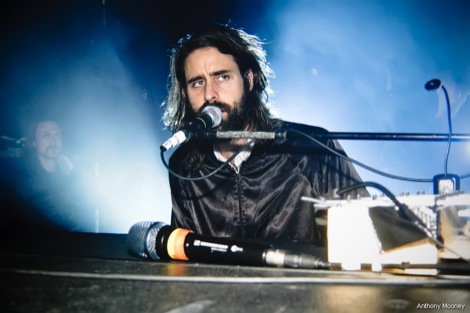 Miike Snow’s Andrew Wyatt
Then there’s the image. What image? What gives with the forced enigma while hiding behind a a whopping stag? Especially given they’re essentially a pop band.
No-one cares what Alphabeat look like, ‘cept maybe the blonde blob with the bob or say, Xenomania, because they’re essentially writers of decent, clean pop music.
Contrastingly, if Two Vowels Miick were producing post-apocalyptic bro-step lurking beneath urban street art ala Burial then maybe, just maybe, we’d give a fig. But we don’t.
Which is why it’s somewhat entertaining and yet downright odd that they take to the stage in matching black attire and theatrical Halloween-style white masks. Fingers are crossed for hideous disfigurement or Take That taking the piss.
The latter of course, isn’t hard to imagine, what with Miikey having lent their craft to Britney, Madonna and Kelis.
Sadly two songs in and with masks shedded we’ve five indistinct chaps and Devendra Banhart. Disappointment abounds.
For a fleeting moment there was an edge of menace, but in truth there’s three more dangerous elements at work tonight:
1) The Masque‘s steps which play havoc with your balance. 2) The Masque’s quite incredible bass set-up which plays havoc with your insides. 3) The guy next to me, whose vicious vinegar farts play havoc with your very being.
No, Miichael, despite a very obvious artifice for edge, stylistic danger and mystical intrigue are unutterably uninvolving as performers possessing as much charisma as a plantpot. 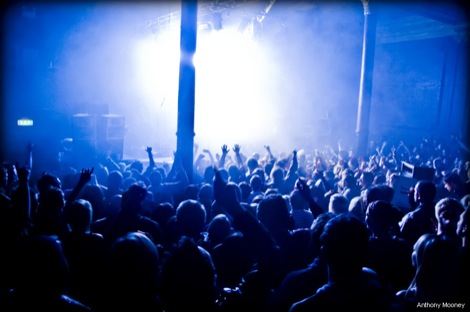 The Masque crowd.
But hang on a minute, there’s one other thing we’re not forgetting – the tunes – and here’s were the Swedes succeed.
Sure they’re formulaic, but it’s a winner. Often beginning with glacial trickling piano and crashing electric drumpads, they ramp up the bass before gushing into fountains of glasscutting pop.
They mix it up by adding neat little flourishes; Burial a chiming xylophone, Sans Soleil warming gospel harmonies and A Horse Is Not A Home a downbeat melancholy which transforms into whirring trance.
Their best feature is clearly the incessant enthusiasm of the percussionists deployed around the stage thwacking their kits like Mongol shamen.
Sure, there’s much interchangeable sameness and Plastic Jungle clearly suffers from it’s mechanical plod compared to the ecstatic euphoria of Silvia and standout Animal, but when In Search Of (Fuck Buttons for the V Festival crowd) purrs itself to a sudden deadening full stop there’s little doubt that while the Snowmen have got much work to do, bringing the party aint a problem. 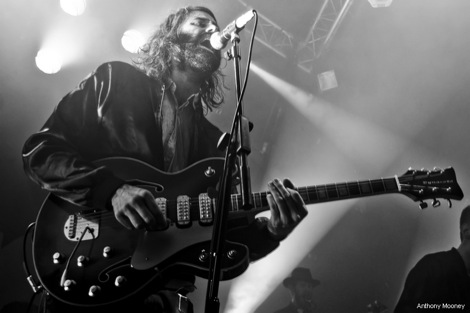