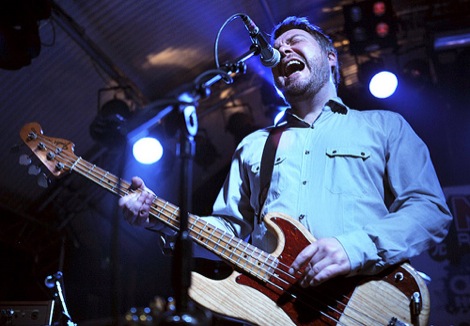 The Doves from above hit Liverpool, Luke Traynor bows at their altar.

It’s rarely been so difficult to squirm to the front of the crowd at the Mountford Hall.
I’ve been to a fair number of gigs at Liverpool University, and my polite push and shove has nearly always seen me worm my way to at least row 7 of the masses.
This time, however, as the Doves unleash their first strident chord, I can’t even get close. I’m barely past the mixing desk.
Still, I’ve found these days that you enjoy the music more away from the melee, listening more rather than concentrating on the two yard spec you’ve fought hard to mark out, two beers in hand.
The Wilmslow lads seem intent on playing some new stuff initially which seems strong enough, but the treble balance isn’t high enough to showcase the ringing Doves guitar chords.
You know those times when you look across to the mixing desk, as they’re happily sliding their knobs, imploring them to hear what you’re hearing?
They apparently can’t. Maybe it’s a taste thing. No matter, when Pounding comes crashing in, four songs into the set, everything’s right with the world.
What an epic track, invigorating the audience with its insistent, relentless beat, it’s now when the gig really begins. And wham, the treble’s suddenly fixed!
That’s the magic Pounding has. From this great track onto another, and now we’re winding up for Jetstream, a more sinister version than features on Kingdom of Rust.
This is the kind of song which Doves excel at, midpaced and moving brooding dance rock and we lap it up.
I wasn’t sure if the lads’ music would excite me as in previous times, like last year’s triumphant Delamere Forest gig for example, but there’s no worry.
Twenty minutes in, and it’s a damn shame they’ve recently announced a band hiatus as we need to be regularly fed these sweeping sounds, a point reinforced by one of those epic soundscape moments, a great wash of climatic movie-esque building melody that is the precursor to Kingdom of Rust.
If anything, this title album track is a touch on the ponderous side and needs a injection of energy, a shot in the arm which is duly provided next up by Caught By The River, from The Last Broadcast.
Not always a live Doves track, but it should be as it’s one of the highlights of the night. The Doves almost sound happy. It’s a strange feeling.
It’s about this stage that you’re totting up the tracks you’re hoping to hear. And that’s the rub, four albums of consistent quality means there’s always going to be some disappointments.
For me, the lack of the haunting Almost Forgot Myself is major blow, and the absence of Here It Comes, and the gorgeous Satellite, is always keenly felt. And I’m only remembering now, where was Words?
Compensation comes in the form of The Cedar Room, that slow burning brilliance with its addictive falsetto interludes, even if Jimi does sing this a little too slowly aswell.
And hot on the heels is that classic about mind numbing crushing depressing boredom. Isn’t this a paradox? With those dampened cymbals, and it’s minor chords seemingly like a keyboard which is running out of juice, Black and White Town is gloriously imperfect.
Catch The Sun next is early summer pop rock which fits the mood and There Goes The Fear threatens to send the seething throng over the edge.
There’s better Doves songs than ..The Fear, but it’s probably still the number one request, but those tribal African drums go down a storm at any live gig.
The gig’s almost over in 75 minutes which was a touch surprising as they’ve got more than enough stuff to command a 90 minute set. But with tickets priced at ÃÂ£18.50, I guess that’s your quota for the economical price.
And the best is yet to come. Pity those poor fools who think ..The Fear wraps things up.
All Doves aficionados are now limbering themselves up for that electronic wonder, that four-and-half minute bundle of dance energy, that blissful beautiful ravey ,tinny, gem that is Spaceface.
I exaggerate not when I say it’s the best closure to a gig you could ever wish. I don’t think New Order could have done it any better themselves.
Thank the sweet Lord for SubSub. Thanks to God above for Doves.