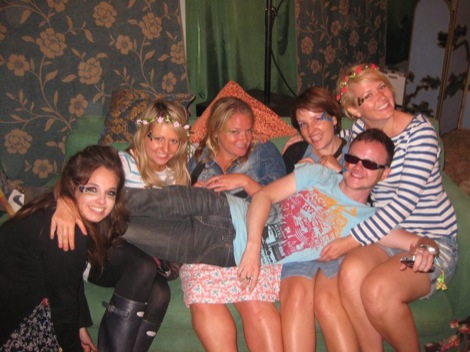 If you believe much of the post-Latitude Festival coverage you’d think the idyllic pastures of Henham Park resembled Hi-de-Hi! gone Hostel.
A kind of torture porn dumping ground for the middle-class where sexual deviants lay in wait for unsuspecting teenyboppers as they wandered off into the woodland. And if that wasn’t bad enough, there were also the Aryan ASBO stag-weekenders enacting all manner of hideousness disrupting the tranquility of what’s meant to be Britain’s safest summer knees-up.
Indeed, had Getintothis not experienced the four days of festivities first-hand, we’d have believed the photo below was propoganda supplied by diligent marketing types replacing something along the lines of ‘WELCOME TO LADITUDE: DESTINATION RAPEVILLE.’ 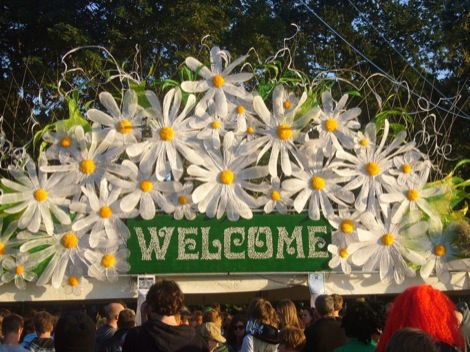 Of course horrific incidents did reportedly occur, but the moral panic which has snowballed subsequently severely – and unfairly – dents Latitude’s remarkable reputation.
Indeed, it was only last month that safety campaigns were launched after two attempted murders and a serious sexual assault occured at T in the Park while let’s not forget Glastonbury – the trump card of all UK festivals; one which Latitude is supposedly the smaller, more cuddly imitation, has seen overdoses and even shootings, blight its reputation in years gone by.
For Getintothis, our second trip to Southwold, was similar to the first; sun-filled, crammed with culture and topped off with crackin company.
Oh, and then there was the music. Yes, lashings of music. Close to 35 bands came under our radar, but alas no Tom Jones. Like a bulbous spare bollock, spray-tanned and wrapped in cotton wool, his warbling timbre emanating on Thursday night deep within the forest was only snatched from afar as close to 15,000 people sardine-tinned their way across a skinny bridge only to be turned away.
A pity, for the lucky few were showcased a run through new record Praise & Blame which plucks more from the Johnny Cash–Rick Rubin spectrum as opposed to his usual cabaret claptrap.
Alas, we settled for a few night-caps and readied ourselves for three days of earglee. 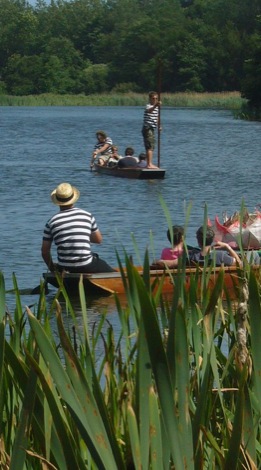 ‘Ban this sick filth’
FRIDAY:
The five-day forecast made for depressing reading, and when the heavens opened around 5am, we feared a Glasto 2007 re-run; the kind were canoes are acceptable forms of transport and wellies are more preferable to class As.
Thankfully, we rise with the sun busting a gut, eased by a fair bluster and Tom (my mate, not the warbling spray-tanned bollock) has got bangers and bacon on the burner. Bonza. And it’s not long before we’re tucking into our first slice of noize sandwich.
Well, the kind of sandwich which isn’t very noizy, doesn’t really have much filling and you’d be mildly depressed had you purchased it from somewhere other than Spa.
Said sandwich arrives in the form of Matthew P, a lone troubadour who sings and strums all very pleasantly but fails to distract from the artwork being erected in the near by trees. 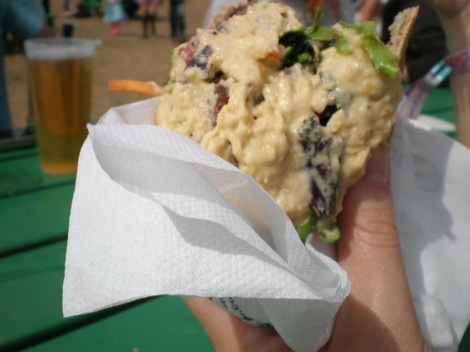 Brunch.
Hastening to the Uncut Arena we catch Jonathan Jeremiah who successfully swings from Hour of The Bewilderbeast-era Badly Drawn Boy; all brassy parps and emotive oozing to yawnsome crooning and mildly embarassing between-song banter. His convoluted story-telling is dying on its arse as we return to the Sunrise Arena expectantly waiting on our hometown’s Delta Maid when catastrophe strikes and the whole tent collapses like something out of Indiana Jones. 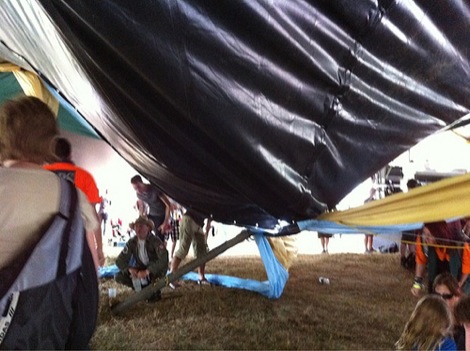 Sunrise Arena collapses courtesy of Natalie J.
Amid faint titters of shock and wondering whether Festival Republic have filled in their risk assessment/insurance forms, we make a hasty retreat for the Obelisk Arena were Kassidy laughably aim to entertain with blatant Doors rip-offs of People Are Strange and Riders On The Storm. Proving there’s no justice, the Obelisk is still standing as we get a step on.
Faring much better are Denmark’s The Kissaway Trail, who despite peddling post-rock akin to many, they ramp up the pop, throw in a multitude of nifty tambourines and in Thomas L. Fagerlund have a sprightly frontman who’s not afraid to show off his fine lungs.
Typically it’s a band of Brooklyners that conjour up the first moments of magic, as the aptly-named Here We Go Magic infuse cooky time signatures with just enough summer pop to stir those sitting down to rise and shake their behinds. Collector, a case in point, as even those unfamiliar, adopt twanging falsettos to chirrup, ‘I gotta mild fascination…‘
A sprinkling of recently Mercury-nominated Villagers is enough to warrant further investigation and Yuck inject even more iridescence of colour but we can’t stop for long as we’ve an important meeting with Sir Retro Progbeast of 42 Mellotron Road – aka Black Mountain.
Long-time Getintothis faves, the Vancouver quartet juggle restrained axework, twinned vocals from Stephen McBean and Amber Wells and lashings of droning organ to transport us to an era of medieval heroics and blood-swamped battlefields.
Grooves are in no short supply with Druganaut an obvious high before Tyrants billows around the tent for eight ecstatic minutes as they exit stage right with the keyboard fizz still swirling high over ahead. 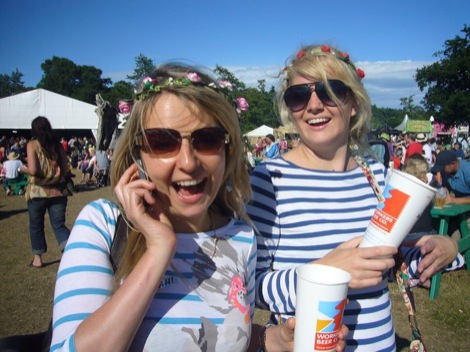 ‘Hi mum, I’m at Latitude!‘ Briggs and Jenn rock the sailor look.
Back in the woods the Sunrise Tent is securely up, though there are regular neck strains just to check we’re not facing imminent impalement, as I Blame Coco blast out the type of pop which you kinda know is daft but it damn won’t shake from your head an hour later.
The same can’t quite be said for The Middle East who start oh so brightly with After The Gold Rush-inspired yearning folk before descending into the morbid, then the morose then the downright murdered in a south-fried massacre.
Enough is enough, and we cheer ourselves up (irony alert) with some Laura Marling and our first of the weekend’s AMAZING haloumi burgers from Maxwell‘s ‘posh’ burger van.
Marling may be good, but Maxwell’s delivery is something really special. Via hippy parentage, the 20-something has been raised on the Wirral, done stints in London, Nottingham and now Bristol – and has perfected the art of takeaway food with homemade quality. So much so, Getintothis returns for three trips during the course of the weekend while blabbing to anyone that’ll listen that this is the food stall of choice. Judging by Sunday’s queues we weren’t mistaken.
Anyways, Marling. All’s very much dead on, but there’s little which raises her to the Joanna Newsom levels we witnessed the last time we were in Southwold to ultimately suggest whether the big stage will ever suit one so special, yet defined by intimacy and such introverted tendencies.
Islet suffer nothing of the sort back on the Lake Stage, doing what they did so well during Liverpool Sound City, which is making an unholy racket while kicking drums into the crowd and shouting very loudly into peoples faces.
It makes for genuine laugh out loud fun and entertaining viewing alone yet their tunes are so, so good that they’re the undoubted win of the weekend when it comes to new bands.
Empire of the Sun are worlds apart; drawing from big budget pop and spectacular ambition, former Sleepy Jackson oddball Luke Steele urges us to enter into his Wonka Factory of dreamscapes and fanciful surrealism, so you get the dancing robots, psychedelic lightshow and OTT costumes.
Problem is he’s shopped at Poundland and ended up with The Scissor Sisters‘ cast-offs. It looks cheap, sounds even cheaper and has the overall effect of a knock-off job down the local Civic Hall with a bad Prince pastiche going off in the background.
It’s truly awful and only amplified further as we seek shelter in the Uncut Arena where Richard Hawley has seemingly injected everyone with mogadon as the tears seem ready to stream such is the haunting power of his noir-R&R. Bleak yes, but wholly engaging. We manage to only catch the finale of what’s clearly been an unmissable 40 minutes despite his insistence that he’s ill.
His closing number Soldier On, from his best LP to date – Truelove’s Gutter – bends, tremors and blisters in fractured black and white and only when the sound finally flickers to a halt do we snap out of some cinematic trance. 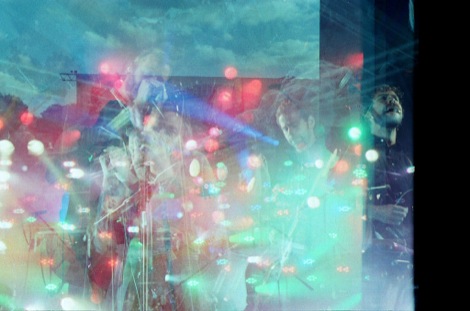 The National at Latitude 2010, by Lucy Bridger
Rallying the troops we converge amid the top of the sloping Arena for Brooklyn’s The National. The first, and only, time we saw them was at the Explosions In The Sky-curated ATP and it’s fair to say they were rather fine, yet with the arrival of Violet, there’s a sense something better is on the horizon.
Yet, nothing could have prepared us for what was about to follow. An hour plus of the finest festival headline set imagineable. Raw power, thunderous anthems, flickers of fragility, bristling brass and ghostly emotions of things left unsaid yet felt by everyone present.
Characteristically central to the drama is Matt Berninger; a one-man wrecking ball of claustrophobic, nervous energy – whether it be grinding the knuckles of his clenched fists, curling into a suit-jacket ball at the lip of the stage or merely meandering to the back taking shelter behind Team National.
The highs are unstoppable; Blood Buzz Ohio like a raging steamtrain is tossed out earlier doors, Fake Empire jingles away all warped and Christmassy, Mistaken For Strangers is hypnotic and bruisingly heavy while England – dedicated to ‘us’ – sounds gloriously huge.
If ever a band were tailor-made to pick up the baton dropped by REM some time ago, then The National are it.
As the final bars of Terrible Love fade into the ether all’s that is left are a sea of faces charged with emotion and a slight tingling that Latitude’s witnessed something very special indeed.
Getintothis does Latitude Festival 2008.