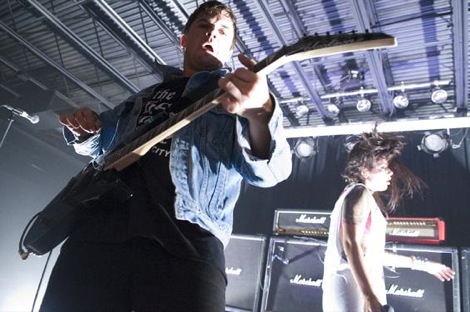 I love noise as much as the next deaf kid. And boy do Sleigh Bells do noise.
Anyone familiar with their debut Treats is probably used to adjusting the volume everytime they press play. By adjust – I mean lowering.
For Treats is the X Factor voice over of indie-pop. It’s the moment you’re watching TV and an ad-break cuts in AND STARTS SCREAMING AT YOU as you dive for the remote control. It’s the screech of a train’s wheels grinding against steel tracks as a flash of light flies up scaring the b’jasus out of you. It’s tinnitus repackaged as pleasure.
It’s no wonder face-melted cheerleaders adorn Treats‘ sleeve – this is music to ra-ra to while having your skin shredded.
Tonight though, there’s an distinctly odd scene unfolding. It begins with Fleetwood Mac‘s Everywhere gently wafting out of Mojo‘s speakers before being royally ripped apart by some mutant freakbeat as Bells’ duo, Alexis Krauss and Derek E. Miller, bound onto the stage.
They bring with them the noise – a noise that sends the crowd into overdrive; all arms aloft, hipster back-packs readjusting, and a fervant surge from the behind. It’s positively rammed.
Yet this noise – this wild, frazzled, near-deafening noise, isn’t being generated per se by the band – it’s largely a giant speaker stack of backing tracks raining down and turned way passed 11.
Sure, Krauss’ sugar-coated vocals, which in turn morph into high-pitched wails, juxtapose brilliantly with Miller’s low-end fuzz sledgehammers but there’s also a mountain of beats, guitars and added extras making up this wall of sonics.
Is this Pop Idol for indie kids? Guitar Hero in a live context? Is it real? It’s hard to work out – but clearly most of those here tonight care not a jot.
Krauss for her part is on thrilling form. Kids sees her adopting a lop-sided falsetto and ear-drum bursting shrieks which defy any pleas for help as she tells us her voice is spent.
Infinity Guitars and the wrecking-ball opener of A/B Machines see her climb the mini speaker stack before waltzing to the front of the crowd, screaming into the mic as her dark mane tumbles over her face.
But it’s Miller’s role which is all the more confusing. While there’s no doubting he’s the brains behind the bluster – his former role in hardcore band Poison The Well proves he’s a history with said noise – it’s what he’s not doing which is oddly fascinating. Tell Em and Straight A’s sees him working overtime in the riffs department, bouncing around like a Duracell bunny, but there’s an army of guitars added to the mix in which he plays no part at all.
Then on the likes of Run The Heart and the Funkadelic-sampling Rill Rill he disappears through a studded door stage left seemingly to recharge his batteries leaving Krauss alone to sing over a backing track. It works, just, – but only in the manner of a gloriously loud karaoke.
Which is kinda the point, Sleigh Bells live for the moment, instinctively belting out their heart and like a drunken fool on the mic down the all-you-can-eat chinese buffet after-dinner singsong – it doesn’t really matter what noise you make, so long as you bring it.

Hearty nods of appreciation must also go to Shadow Cabinet and Binary Toad for warming up the crowd on a particularly untoasty night in the Pool. The latter showcased their obvious love for glass-cutting, fractured beats while Jay Freeman‘s Toad threw down more of a locked groove with the odd euphoric rush which climaxed with a Fischerspooner-esque belter full of deep bass thuds and filthy rumbles. Note to Freeman, where can we buy this tune?
Shadow Cabinet
Binary Toad