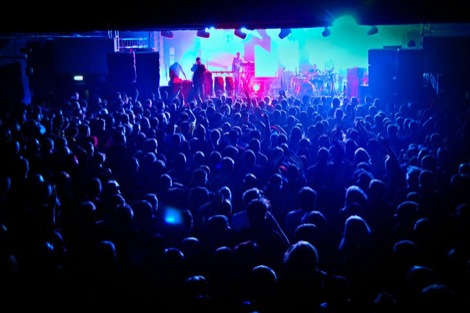 Hold on to your backside, as Getintothis’ John Maher reports from the thrilling finale of Liverpool Music Week.

This is the kind of music that melts your bowels. The kind of gyrating sub-bass ructions that flutter your soul. Endlessly, over and over again.
Music built in a pre-trance time – only no-nonsense, sound-to-body brilliance that’s as uncompromising as it is unconcerned with headlines. Leftfield revamped for one last lap.
Nobody, though, informed Breakage: he’s the one at the left-hand side of the stage everyone’s ignoring. A bloke fidgeting behind a laptop taking on the guise of a technician or computer science student.
It’s a pity because if the sound was turned up to hearable levels people might have realised he was playing a likeable brand of breakbeat/dubstep (sensual remix of Florence included). 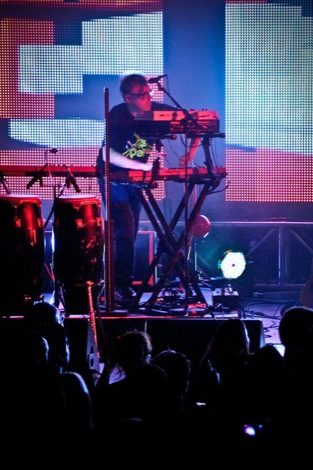 No amateurish problems for Leftfield: a great choice to end Liverpool Music Week/three weeks/however long you like. Conductor Neil Barnes – shorn of musical other half Paul Daley – is revved up, bottled still with energy from another time. And a surveillance around the room proves suspicions that this may well be a who’s who of living the dream one final time (a Final Hit, if you will). Yet it’s thankfully something which adds atmosphere rather than detracting from it.
Early relative calm gets blown away to become ear-crunching techno, aka spaceship LFO, there’s a muscly mass throbbing and it’s also blowing away any mediocre cobwebs of the noughties. Pyrotechnics swoosh throughout a roving Song of Life.
The night follows this path for a while and is mainly acerbic tinnitus-friendly instrumentals; the Kraftwerkian moving-car-on-road projections increasing the rhythmic vibe. A vibe maintained when Djum Djum is wheeled out to spout mad chants on Afro Left – sparking more unrestrained jumping around.
Until a breath-catching Original, when vocalist Jess Mills offers a reminder that some records have words and can be listened to in a vaguely relaxed position. She’s a moving angel soothing us back home.
Soon we’re at full-pelt once more. During Black Flute I spy a man so old he can barely move his limbs, he’s almost willing those huge trucker’s arms and legs into motion. Fortunately, another smiling chap next to him is doing the work – a spiralling mentalist manplume who has clearly been tripping since 1992. Big up the grey-haired massive? 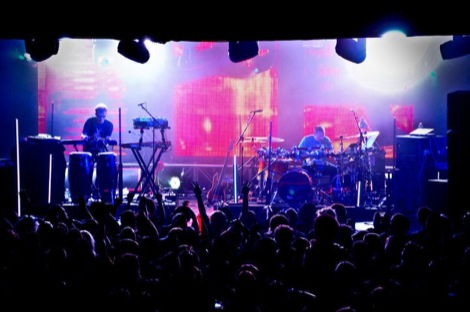 Further stadium-rupturing 4/4s ripple on Africa Shox, which seems to saunter forever. Now all movements are building towards a finale. Then, it comes, drawn back for the encore Barnes eventually lets fly with an imperious beefed up Phat Planet. The rumbling hailstorm of a trillion horses brings on an inevitable (Guinness-fuelled) apocalypse.
Pictures courtesy of Anthony Mooney.