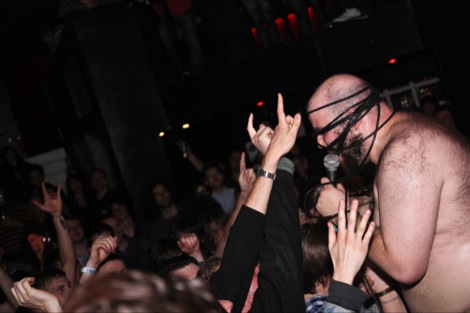 The last night of Liverpool Sound City 2011 sees some of the biggest performances yet.
We’re up at Mojo for Sarah McIntosh, aka The Good Natured, a youthful exponent of brooding electro-tinted pop.
I wonder at first if she’ll be as frosty and withdrawn as the sounds she comes up with: slightly disenchanted-sounding keyboards overlaid with vocals to turn your heart to stone.
Which isn’t to sound disparaging, as she fits in perfectly with the ongoing vogue for robot-laden female pop.
It becomes instantly clear that McIntosh won’t be hiding behind a synthesiser tonight, as she catapults herself into a full on dance routine.
There’s a lot of opening and shutting of palms, recalling Ellie Goulding in her video for Starry Eyed. However, unlike Ms Goulding, McIntosh doesn’t look as though she’s running perpetually late for a sociology lecture.
In fact, she’s the picture of studied cool in a patterned tunic, her pout and wildly angular haircut exuding crystalline poise.
The gestures are slightly laboured at times, as though a recent graduate from the Academy of Poseur Arts, but she’s beguiling enough for this to add an element of daring to her otherwise icy back catalogue.
The dancing extends far beyond the stage itself – she’s clambering over equipment and lashing mic cables into the rapt eyes of onlookers.
Sometimes she’s so deep in the crowd you haven’t a hope of glimpsing her; she could have bombed it to the Pilgrim and left the tape running for all I know. Still, the exaggerated performance seems to transfix the crowd, who are wielding a plethora of cameras.
Just down the road, the Zanzibar are hosting something of a Moshi Moshi showcase. They certainly don’t disappoint with recent Swedish signing Niki & The Dove, who starts off her performance blowing through a miniature bird whistle.
Having successfully grabbed the audience’s attention, she proceeds to burst into a thundering yet whimsical performance, reminiscient of Kate Bush without being too derivative.
Much against my will, I seem to be turning this into a fashion blog, but it wouldn’t do to overlook singer Malin‘s fantastically eccentric outfit: fringing draped from her arms, glitter all across her face, and a fox creeping from her t-shirt across her neckline.
The highlight is DJ Ease My Mind with all three band members pounding percussion with all their might.
Arriving at the Masque midway through the Marina Gasolina set is a disconcerting experience.
There are two men on the stage, one playing guitar, one playing bass, both perfectly placid but unremarkable. What is going on?
Then I hear a Brazilian voice squeal something about having a good time as she hurls herself over the barrier and onto the stage.
The former Bonde do Rolê singer later decides she’s happier on the audience side, who couldn’t be happier to be in the midst of her dizzying experimental tunes.
It’s impossible to tell if the people she’s pulling across a skipping rope are casual fans or lifelong friends, such is the mood of celebration generated by her giddy, hyperactive performance.
*Gossip alert* Marina is later overheard decrying that she has only heard ‘party party’ music since arriving in Liverpool. This complaint can hardly be remedied by the following act.
Philadelphia rapper Amanda Blank is an explosion of unbridled energy. Performing alongside Spank Rock, she divebombs the audience with a fierce, libidinous take on hip hop.
But fierce or not, she seems smiley and personable, signing an autograph midway through the set and failing to let a microphone setback stop her bouncing around the stage for an instant.
I round off the night watching Fucked Up‘s perspiring teddy bear Damian Abraham complete a hug trail of every last soul in the Kazimier. It’s a long route, but a beautiful thing to behold, perfectly capturing the convivial spirit of the night. 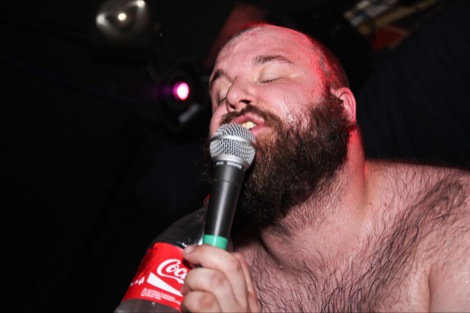