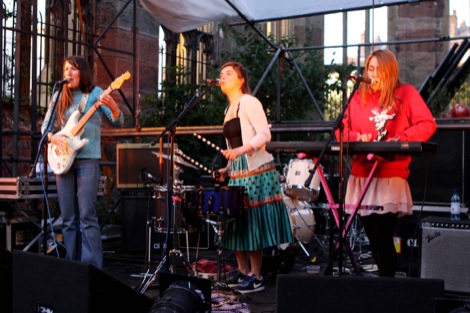 Leading Liverpool stars shine during Getintothis‘ showcase night at the Bombed Out Church, Orla Foster was there to capture the action.

First this evening, Stealing Sheep take on the ghostly environs of the bombed out church, their punchy harmonies and sweet as pie delivery sending everyone gooey. Lush instrumentation, endearing interplay, and occasional darker interludes result in a captivating performance from the trio.
They are followed by Outfit, Liverpool’s latest art rock saviours rising from the ashes of Indica Ritual.
Strains of the latter certainly manifest themselves in the bleep-laden guitar passages and time signatures demonstrated tonight, but this time there’s more of a Wall Street disco agenda recalling Roxy Music and Talking Heads at their prowling, seedy best.
There’s no mistaking the fact that singer Andrew Hunt carries an aura of David Byrne about him, he just needs the billowing suit.
Next tonight it’s Emmy The Great and her band, who appear slightly subdued at first – almost a footnote to the loungey atmosphere of Studio 2, which is buzzing with conversation and unrelated schmoozy laughter.
Still, you never want to be one of those folk types sitting cross-legged on the floor muttering SSSSH! so a lively atmosphere is okay.
First Love is a real highlight, showcasing Emmy’s tough-yet-fragile vocals, and rescuing Leonard Cohen‘s ‘Hallelujah‘ from the legion of X Factor contestants who stole it away.
Later, Emmy points out with a wry smile that this evening is the Rapture, and thanks us for choosing to share our last night on earth seeing her play. Her set finishes with ‘Mia‘ which goes down a treat.
After getting our ears pleasurably blown off by Vasco Da Gama in the Screenadelica exhibition, it’s onward to Mello Mello, where Emily Lansley, one third of Stealing Sheep, is performing in the incarnation of Emily & The Faves, an equally retro outfit with more of a psychedelic edge.
Despite some drum issues, the band deliver a rousing performance, perfectly showcasing their brand of 1970s-inspired, Americana-tinged pop, with Emily herself looking particularly fetching in a bright red vintage jacket.
Pictures courteesy of Conor McDonnell.