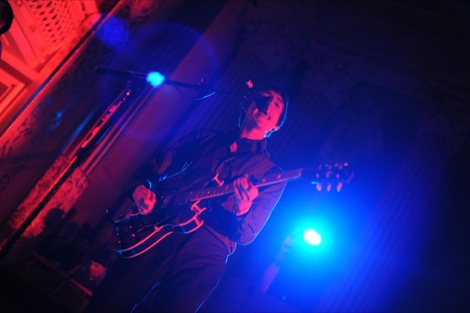 nson
Unable to shake off his influences, Getintothis’ Jamie Bowman argues Miles Kane lives up to his Shadow Puppet moniker.

It’s easy to forget Miles Kane has been an energetically sharp presence on Liverpool’s music scene for half a decade now.
Where his previous bands The Little Flames showed fizzy pop potential, the Rascals were as unoriginal as their name and it wasn’t really until he joined forces with the Arctic Monkey‘s Alex Turner as the Last Shadow Puppets, that his love of orchestral mod-flash came to the fore in impressive style.
Now striking out on his own, Kane is nothing but confident. You can imagine the teenage Miles posing with his tennis racket in the mirror, practising his moves: guitar as gun? Check. Guitar as penis extension? Check. It’s endearing and he looks the part but it’s impossible not to think of Paul Weller as the diminutive Kane struts across the stage, all feather-cut and tailored shirt.
As for the music, Kane has rejected the Scott Walker-esque trappings which made the Puppets album so intriguing and instead immersed himself in the sounds of English freak beat and fuzz with nods to arty stylists like The Creation, The Yardbirds and The Action.
The retro touches on would-be psych-rock anthems like ‘Kingcrawler‘ and ‘My Fantasy‘ are full of huge choruses appreciated by the laddish audience perhaps a little disappointed by the Beady Eye album.
It’s this association with his heroes that you suspect slightly hinders Miles. Noel Gallagher appears on Mile’s new album and there’s an Oasis-esque fear of experimentation that stops his sixties obsession converting from magpie-like stealing into something more interesting.
It’s there in the rather too obvious cover of The Beatles‘ ‘Hey Bulldog‘ and ‘Inhaler‘s blatant steal from The Strangelove‘s garage classic ‘Night Time‘.
Until Kane is able to shrug off these trappings and tendencies, his time in the shadows may last a little longer yet.
Picture courtesy of John Johnson.