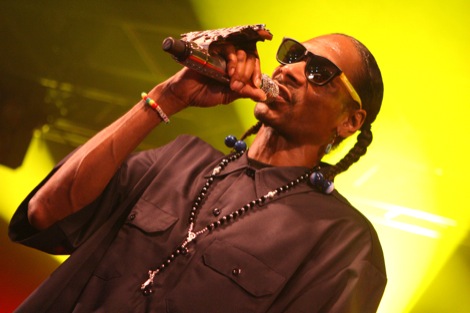 The rap game has changed a lot since 1993 when Snoop Doggy Dogg – as he was then – burst onto the scene with his debut album Doggystyle.
His transformation from gangsta to pimp to ‘will throw down a verse on a Katy Perry track and have a reality TV show’ has seen Calvin Broadus Jnr grow from Snoop Dogg The Rapper into Snoop Dogg The Brand.
If you needed proof of his universal appeal, all you had to do was look at his audience for last night’s gig at the O2 Academy.
Those who bounced to classics like Gin and Juice and Who Am I (What’s My Name)? first time around and are now in, or nearing, their 30s jostled for floor space with the younger, cooler brigade and pushed out of the way a smattering of those who really shouldn’t have been out so late on a school night.
They patiently waited while the DJ dropped some beats and hauled up girls from the audience to dance on stage (and get roundly booed) until well after 10pm before the man of the hour finally made his appearance.
The disappointingly short set was a ride through a career that has spanned 11 albums to date. There’s no band, no clever string arrangements. It’s just Snoop, a DJ and the volume turned all the way up to 11.
Finally slinking on stage with two burly bouncers either side, the S N Double O P got the crowd bouncing (though some seemed content to just film it on their mobiles) and soon launched into his contributions on 50 Cent‘s P.I.M.P. and Dr Dre‘s Next Episode before dropping one of his and Dre’s new tunes from the hotly anticipated Detox.
Then the power went on the DJ decks which got as hot as everyone in the audience was. The short delay was forgotten when the opening bars of Gin and Juice dropped out of the speakers before Snoop then disappeared, only to return in an LFC shirt with ‘SnoopDogg 1‘ on the back. The reaction was mixed.
Less mixed was the response to some from his debut collection which followed.
But the best moments came when the former gang banger paid tribute to those hip-hop stars no longer with us.
He played out Biggie and Tupac classics and there was a moment of silence for his close friend Nate Dogg, a staple on so many hip-hop classics, who died earlier this year.
Well before the main man took to the stage the unmistakeable smell of Snoop’s favourite herbal remedy filled the air (don’t these people know there’s a smoking ban? They do after security got hold of them), adding a little West Coast Cailfornia feel to proceedings.
Perhaps wisely, Snoop stayed away from too much from his new album Tha Doggumentary (which has more guests on it than some house parties I’ve been to) but did drop the David Guetta-produced club banger Wet which is destined for a dancefloor near you very soon.
Snoop’s laidback stoner-drawl style is simple. He’s no tortured artist with a drug problem – for Snoop it’s all about big screen TVs, blunts, 40s and, erm, ladies. It’s a formula that works for him – and the crowd he drew last night.
Before the Doggfather, the already packed house gave a decent reception to the reggae-influenced beats of support act Maverick Sabre, who showed enough promise in his short set to be marked out for potential future solo stardom after his recent turn with current dubstep kings Chase & Status.