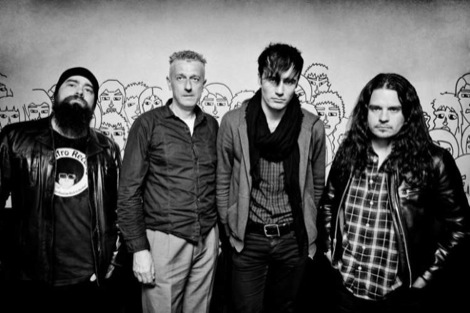 Æthenor provide one of the most memorable gigs in Getintothis‘ lifetime. But for all the wrong reasons.

And it started oh so promisingly…
The first time we stumbled across Ex-Easter Island Head Getintothis was hooked. Hooked on their fresh take on sound. Hooked on their dynamic circular rhythms which work both as an ambient textured pillow and also a propulsive exercise in head-bobbing. Hooked on their how-on-earth-is-this-happening approach to noise. Hooked on their hooks.
Their Mallet Guitars piece was a triumph on so many levels, both live and on record, an outing of an as yet untitled new track provides a must-not-miss moment on tonight’s delectable billing by new promoters Behind The Wall Of Sleep.
And so it proves. From beginnings of softly-softly oriental twangs and slight slide guitar the four-piece construct – and it is literally a construction of musical building blocks – a tower of precise hammering chords, twanging single-note rhythms and steady driving Popol Vuh-like pulses.
A marked change from Mallet Guitars, the new piece finds Benjamin Duvall, George Maund, and Outfit‘s Nick Hunt evoking subtle finger-picked guitar sounds while only Jake Chabeaux stands using the body of his guitar as a drum with that distinctive mallet thud. Two thirds of the way in, Maund produces the killer blow with an allen key (obviously) slid up the frets resulting in a harder locked groove reminiscent of Another Green World-era Eno or Radiohead at their most progressive.
Like Open University gone krautrock, the 20-odd minutes are utterly captivating and it’s a wonder where E-EIH will venture next.
Conan, unfortunately, don’t so much venture, but plod. They’re an exercise in sludge in aural form and though there’s segments – a brief High On Fire-inspired thunderous slog here, a rumbling cavernous drum roll there, too much of their doom-laden set draws on the tried and tested template of the bands their clearly indebted too.
They work best when unshackled from the slowcore and extend their obvious talents, like Satsumo, which bursts from the traps before the trio slam hard like a warhammer blow to midriff.
There’s no gentle introductory build or plodding trawl through the sub-bass mire where Mugstar are concerned. They deal in supercharged metallic steamrollers with few endings, only segues of rolling wave after wave of bludgeoning melodious mayhem.
Once again, Serra is the ultimate centre-piece, 15 minutes of swirling psychedelic noise broken up by Pete Smyth‘s stabbing keyboard horrorscape slices. This is the sixth time Getintothis has caught the group live, and it’s clear their following is in rude health.
Fresh from their Sound City closing party set (a finale which brought new meaning to the term ‘loud’), tonight’s standout is without a doubt Steve Ashton‘s incendiary drums which are clattered so fast, so hard and so relentlessly you can almost hear them wince come the closing bars of Beyond The Sun.
Last year’s Lime is reissued later this year, if you’ve yet to get involved, mark this one down.
And so to Æthenor…
Here’s a band with a combined talent which reads like a Who’s Who of underground music; Kristoffer Rygg fronts Norwegian metal electro unit Ulver, Daniel O’Sullivan of prog-folkies Guapo, improv drumming ledge Steve Noble and doom’s head honcho himself Stephen O’Malley.
It’s a line-up so regarded that The Kazimier production team has deemed fit to shape an entire backdrop in their honour – numerous white pyramid-shaped obelisks hang draped from the ceiling. It’s an impressive sight, particularly when Mugstar‘s Sam Wiehl bounces off their visual projections.
They needn’t had bothered. Æthenor are nothing short of awful.
What starts as a half-arsed wall of tinkering (our initial hopes that this is the Oren Ambarchi approach to sound collage) quickly descends into O’Malley honky-tonking one-note plinks as Rygg writhes on the floor and O’Sullivan does his best how-to-turn-an-instrument-off-and-on impression. Noble seems the only one not half cut on the wine they were quoffing in the Kazimier’s garden as he deftly shows off his impressive range behind the kit.
But it’s not long before even he downs sticks to laugh at O’Malley and co’s preposterous self-indulgent wankfest.
Years ago Getintothis used to sit off at our friend Reg’s gaff. Here Reg and numerous musicians would tinker with instruments and an assortment of gadgets and we’d laugh at the ridiculousness of the results.
Tonight Æthenor remind me of such occasions. Yet Reg’s house didn’t charge for admittance, hold any expectations – and at least we were guaranteed a giggle – Æthenor sadly can’t even provide the latter.
Instead a sizeable crowd, who’ve waited til gone 1am, is reduced to a mere handful for little but throwaway toss. The accidental highlight of which is a drunken O’Malley throwing the chair he’s been sat upon aimlessly noodling, at an audience member in the front row.
It’s a wonder he’s allowed to continue.
The crowd vote with their feet as they stream out the Kazimier, leaving O’Malley to conclude with a solitary ‘sorry’ as he exits the stage. It’s the very least he can say.