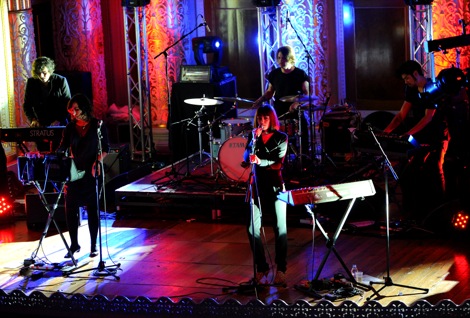 Location isn’t everything but when you’re playing St George’s Hall it’s pretty much inescapable.
The neoclassical magnificence of one of Liverpool’s premier Grade I heritage sites is a spectacle in itself, so for a hometown band – let alone one making their much-anticipated return to the city after a significant time away – to play at such a venue requires a certain degree of assurance, and indeed presence to fully do the place justice.
Ladytron deal with icy detachment, so the former was a given. But the latter, questionable.
A decade on from their scene-setting noir synthscapes, the ‘Tron, it could be argued laid the very foundations for the saturation of electropop which has leapt from the undergrowth into modern day commercialism.
Now, they’re back where it all began – on home turf. The place songwriters Daniel Hunt and Reuben Wu grew up, the place vocalist Helen Marnie studied, the place the group formed lifelong friendships and the place they honed their DJ skills, sound and ethic before launching their brand in the shape of their very own club Korova.
Korova was a physical construct of the Ladytron sound; dark, sexy, modern but built on a foundation of classic rock and roll. A far cry from St George’s.
And for the first three tracks the band are seemingly in awe of their surroundings – so too are the crowd, as detachment veers towards a malaise of disjointed distraction.
The lightshow – the firework crystal bombs of exploding yellows bounce off the 15 foot chandelier, blue and red bursts of colour change position so that keyboardist Mira Aroyo, though stock still, appears to be jolting violently and there’s even some jazzy lazer completely fucking with our eyeballs. It’s quite stunning.
Yet the music isn’t quite connecting. 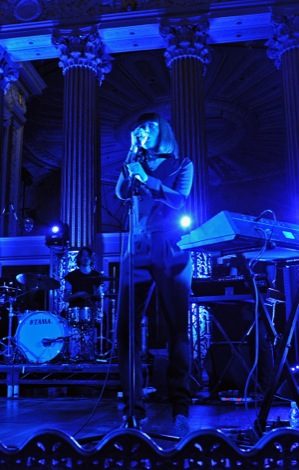 Marnie’s invitation to those bobbing at the back to join her down the front, at last kick starts the fun. What was merely a polite suggestion sees virtually the entire hall leave their seats and stampede to the front and suddenly we’ve a party on our hands as International Dateline transcends the grandeur of the surrounds recalling those nights down Korova’s mirrored dancefloor.
But this proves to be the watermark moment of the evening – a high which is both instinctive and tinged with humour – whereas the rest of the night, while sonically dead on, plateaus for the next hour.
There’s no doubt the Aroyo-led, more punk-infused slabs of thudding electronica work best (True Maths and a particularly malevolent Season of Illusions resonate blackly) but only Seventeen truly takes the roof off.
It’s perhaps unfair to blame the vast backdrop. Maybe Daniel Hunt‘s recent admission was more on the money: ‘The saturation in pop of what was once called ‘electro’ is making it difficult to turn on a radio, and if we are in any part responsible for this, then I am truly sorry.‘
On this evidence, and more pertinently, their back story and what they’ve done for Liverpool, there’s clearly no need to be sorry, Ladytron have served us very well indeed, it’s just maybe time for something new. 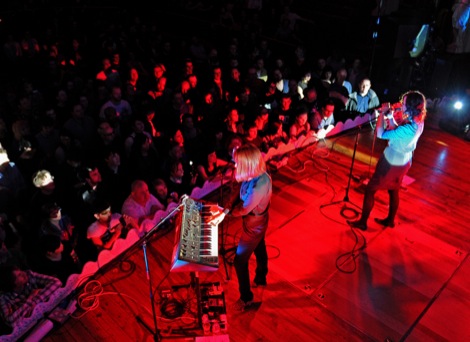 That something new could be Outfit. Getintothis has championed the former Indica Ritual boys from the beginning, but tonight is a slight bump in the road.
Again, it’s that bloody great big hall they’re playing in that’s the problem. Swallowing every nuance of detail, every beautiful harmony, every extended riff from Nick Hunt‘s guitar, Outfit are merely not quite equipped for this. Yet.
The songs are there, Andrew Hunt‘s wee shimmying away from his keyboard belies a growing swagger and David Berger‘s no nonsense percussion deserves special praise on this their fourth outing – an experience to cherish but also to learn.
Setlist:
1. Runaway
2. High Rise
3. Ghost
4. International Dateline
5. Soft Power (Key Swap)
6. True Maths
7. Little Black Angel
8. Discotraxx
9. Season of Illusions
10. Ace Of Hz (Key Swap)
11. Fibula
12. Seventeen
Encore:
13. White Elephant
14. Playgirl
15. Destroy Everything You Touch 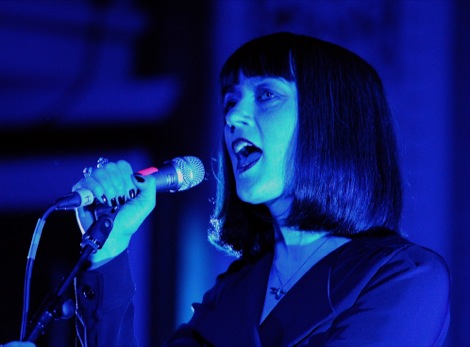 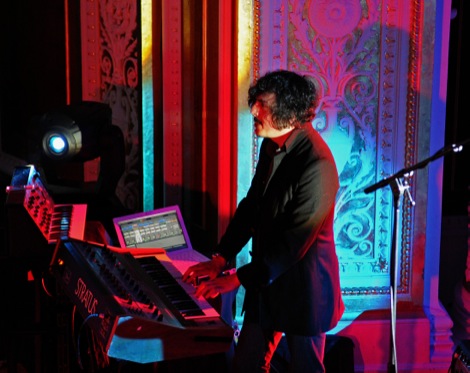 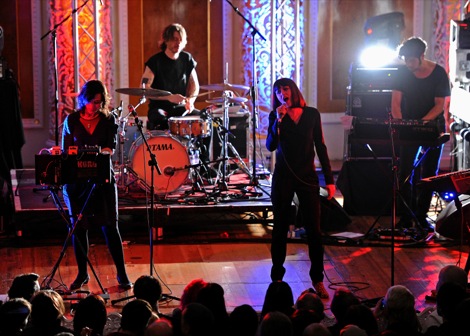