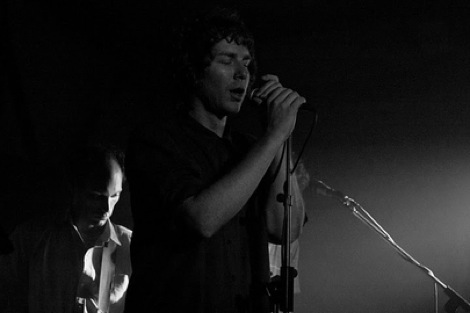 Leeds’ retro revivalists Spectrals bring the sound of early Creation Records to Static Gallery before Crystal Stilts leave it late to get their spiky garage rock together. Getintothis’ Jamie Bowman parties like its 1985.

Watching Leeds-based Spectrals, I found it impossible not to think of pre-Oasis Creation Records.
Here was a band who sounded ‘indie’ (before that meant sounding like Travis) – the songs skipped and fizzed along, full of Spector-esue echo, surf guitar and love-lorn vocals from Rebekah Brooks-look-alike Louis Jones.
It is hardly surprising then that this impossibly young looking four-piece have recently signed to ex-Creation man Dick Green‘s Wichita Recordings and if this show is anything to go by, their forthcoming debut album Bad Penny will be an absolute retro treat.
Flashes of Velvets, Jesus and Mary Chain and The Ronettes (the majority of the songs seem to start with the drum beat to Be My Baby) are all present, with the best touchstone the jangle-funk of Orange Juice or the wide-eyed naivety of early Aztec Camera.
Either way it’s great, so slip on a polo-neck, get a bowl cut and prepare to party like its 1985.
A whole ocean may separate Leeds from New York, but musically Crystal Stilts are a band happy to mine the same black clad seams as Spectrals.
On record, this is a band whirling through an echoey wind tunnel of murkiness and menace, but sadly the emphasis is on murk when they play live.

Gone are the cavernous spaces and Martin Hannett inspired whirs and surges that make the Stilts so compelling on disc.
Instead frontman Brad Hargett‘s trademark drone of a voice sounds merely annoying, rather than disturbing, as the large crowd throw accusing looks at the sound man.
Thankfully things improve, and gradually the compelling chug of the Stilt’s driven pop begins to hit fifth gear. Hargett begins to face the crowd and moustachioed keyboardist Kyle Forester pulls them along with his Clinic-like keyboard stabs and a Joy Division-like intensity.
Highlights from recent album Love With Oblivion are dragged around and given a right kick-in live, with the wonderful Flying Into The Sun recalling Arthur Lee and Love, with it’s garage spikiness and perfect pop chorus.
Converging In The Quiet is even better: a stunning amalgam of early New Order and krautrock motorik, that sums up this strange, beguiling and undeniably special band perfectly.