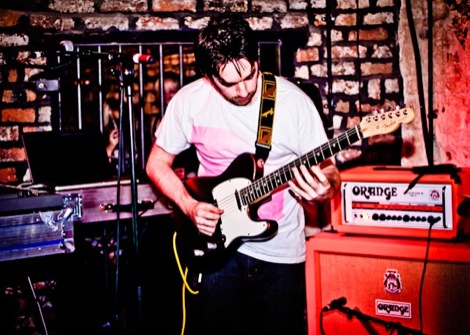 The best instrumental bands are evil, but evil manifests itself in different forms.
Muto Leo probably aren’t evil enough and don’t stray too far from their up tempo post-Foals blueprint.
They also fall victim to the delay pedal curse, using it for ambience rather than the sonic terror of which the headliners are garnering a reputation for.
That said, when they stray into more angular territory some interesting avenues appear and their recorded output hints at rich furrows yet to plough.
Rhodes aren’t really evil either and half way through they stop even being instrumental.
Not since George Dawes-era Shooting Stars has a man who looks more like a baby had more fun behind the skins, and he drives some lively low end along with a smile on his face.
They’re stronger when their new vocalist takes the stage and when the first night nerves die down they’ll be on to a winner. 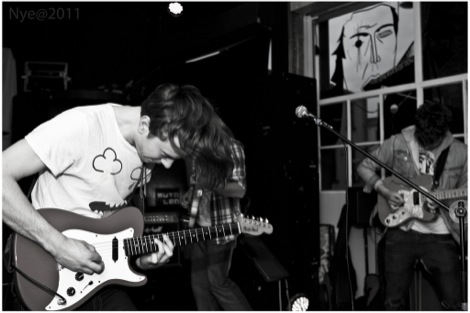 Ninetails aren’t instrumental, but they’re definitely evil. It must have been a while since the Mojo stage has been graced by such bad hats and worse gurns.
They look like extras from Kes. But they are talented…where they’ll eventually settle is anyone’s guess, with Magistrates style funk vying for space alongside space jazz scales and some phat, aggressive baselines.
Until that evil manifests itself in better headwear, we have Three Trapped Tigers.
They are dead bad evil bastards and they make it look easy. The star of the show is drummer Adam Betts, holding it together while Matt Calvert and Tom Rogerson supply the loops and some vicious riffing.
Take the opening to Noise Trade; the tom-centric drums pound at the atonal effects and synth lines, covering in four and a bit minutes what most metal bands singing about surgical procedures never manage in their whole careers – they commune with Satan. The actual, real, Satan.
All his charred, cackling acolytes are well into TTT, even when they seque into some of their more ambient, winding stuff from the EPs, ending in the euphoria of Reset. It’s uplifting but still pounding. Beelzebub should be happy.
Pictures by Dave Howarth and of Tony Nye.