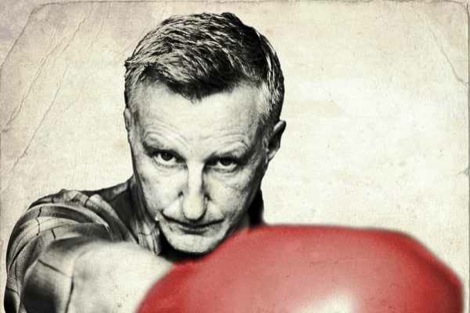 A powerful and timely stroke of politically-motivated song-writing by the Bard of Barking. Getintothis’ Paul Snowdon says there’s never been a greater moment for Billy Bragg to deliver his message.

It was a happy coincidence that this country’s voice of liberal ideology and the leftist protest movement for the best part of three decades was in town last weekend.
Billy Bragg was making two appearances at The Picket just days before Liverpool’s furious public service workers went on strike in the biggest event of its kind in this city for 100 years.
And the atmosphere in the packed-out Picket reflected the angry mood of those about to stand, appropriately enough, on picket lines the following Wednesday.
Bragg was with friends, and those comrades – some of whom have been following his every word since those battle-scarred anti-Thatcher days of the mid-1980s – were thrilled he was there to rally their fighting spirits on the eve of the mass walk-out.
The evening was part of Bragg’s latest venture, the Left Field In Motion Tour, and he was preceeded on the stage by two excellent new hip-hop artists.
Sound Of Rum kicked things off with the energetic vocalist Kate Tempest alongside guitarist Archie Marsh and sticksman Ferry Lawrenson providing a lively start to the night’s entertainment with a number of cleverly-composed pieces, all delivered with swirling enthusiasm that the crowd lapped up.
Akala followed, and although not as dynamic as Tempest, the younger brother of Ms Dynamite was nevertheless just as effective, notably with an inspired number which used the works and words of William Shakespeare to create a cleverly-constructed rap Comedy Tragedy History.
It was then Bragg’s turn in the spotlight – and once again, he didn’t disappoint.
Blasting out his great dig at the nation’s gutter press in the words of his 1984 song It Says Here, it was clear this particular gig was going to be more political than recent appearances in the city.
There was the downtroddens’ reply in the song To Have And Have Not from his 1983 debut LP Life’s A Riot With Spy Versus Spy, his 1991 right wing warning anthem Accident Waiting To Happen which was dedicated to the controversial president of FIFA Sepp Blatter and the rousing 1986 song There Is Power In A Union. For many in the Picket, that was the one they were really waiting to hear.
Bragg also linked the Diggers’ struggles back in 1649 with those in the Occupy Movement, of which he said he was proud to endorse. Indeed, as Bragg said, the words in Leon Rosselson‘s celebrated song The World Turned Upside Down seemed to mirror an incident in New York City earlier in the week when peaceful protestors had been pepper-sprayed by a NYPD officer – the song finishes with the line ‘…the orders came to cut them down….’
Bragg also played, to great cheers, his anti-Rupert Murdoch/News International song Never Buy The Sun, which in this city, was always the perfect place to perform it.
Alongside the politics, there were some of Bragg’s wonderful songs about love and all of its associated emotions – both good and bad – to enjoy.
St Swithin’s Day, his 1984 heartbreaker about a failed love affair, was just one, as numbers such as the gloriously-upbeat Greetings To The New Brunette and Sexuality and the magnificently-powerful Levi Stubbs’ Tears – arguably his greatest composition – all made it on this particular set-list.
But this was a night where politics and fighting for just causes were the over-riding themes, and I Keep Faith from his most recent album, 2008’s criminally-underrated Mr Love & Justice, showed he still has the belief that he’s not the only one prepared to stand and fight where battles need to be won.
This was best shown, he explained, on the streets of his home town of Barking in Essex where Bragg actively helped in a campaign to ensure no BNP candidate got anywhere near a seat in Parliament or on the local council. It was an anti-fascist battle, like Cable Street in 1936, that was ultimately won, gloriously.
Rounding off what was another great occasion, the Bard of Barking ended with Waiting For The Great Leap Forwards, putting new words to the song that first appeared on his 1988 album Workers’ Playtime.
With barbed references to the Coalition, David Cameron, Nick Clegg, Margaret Thatcher, unemployment and The X Factor – all in the opening verse – it was a tour de force by arguably this country’s finest singer/songwriter of the past 30 years and proved, if any was needed that Bragg can still write magnificent words and music that have real value – a million miles away from the dross dominating today’s meaningless music charts.