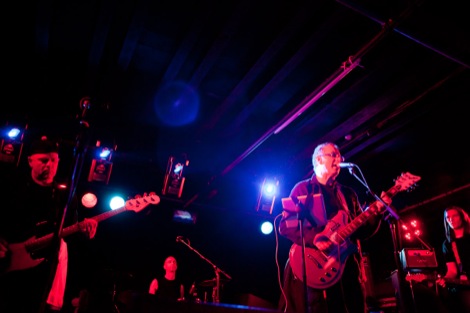 It’s an apt move to book art punk legends Wire for EVOL‘s 8th birthday celebrations. Since their classic period spanning 1977-79, the group’s clipped minimalism and sheer, stark originality has underpinned much of the music that has come through Liverpool’s best club night.
If frontman Colin Newman looks rather like a university lecturer about to deliver a seminar, than perhaps that’s rather apt, because this gig was a lesson in the kind of power and dynamism that runs through so many of his band’s strange and caustic output.
New songs like Smash and Clay simply start and end and what happens in the middle is anyone’s guess but it has little to do with a traditional structure. Graham Lewis‘ rumbling bass powers these slices of noise along while Newman’s guitar chimes and reverberates with a pleasing metallic clang. 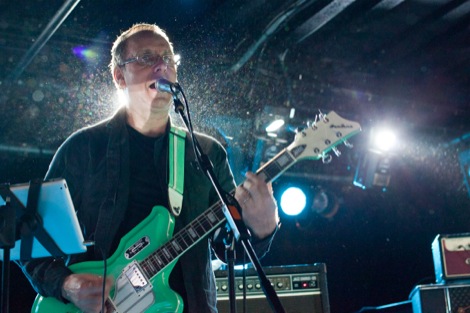 Meanwhile long-haired guest guitarist Matt Simms is doing all kinds of clever and unusual things with his guitar, reminiscent of Kevin Shields with My Bloody Valentine, as he crouches and manipulates his instrument to produce a wonderful noise.
It is astonishing to realise just how original Wire must have sounded at the outset of punk.
Even now with over 30 years distance it’s difficult to pin down just what their influences were and who they sound like.
In fact it’s far easier to spot just who has copied from them. There’s a rich seam of Wire running through Brit Pop of course and if there is one regret about this gig, it’s that Newman is obviously uncomfortable with playing some of the better known tunes from their back catalogue such as Three Girl Rhumba, Dot Dash and the immortal I Am The Fly.
Still being obvious was never Wire‘s thing and the sheer volume and thrilling feedback that envelopes the stage at the end more than makes up for any gripes about the set list. A superb gig. 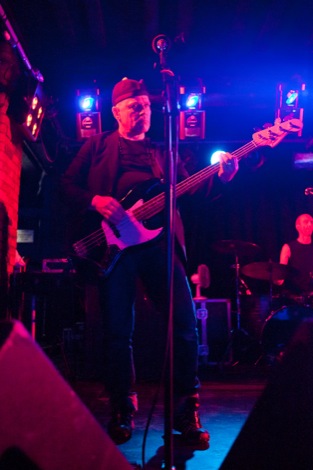