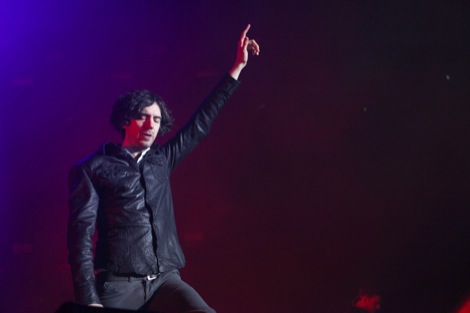 Last time I visited the ECHO Arena, I got into an argument with a woman who accused me of stealing her mobile phone.
It was an unsavoury incident, especially as when I handed it to her, after picking it off the floor, I was expecting to be thanked.
It’s a boring story, I admit, but, an hour into this gig by Snow Patrol, I was longing for something like this kind of heady excitement.
Calling Snow Patrol dull may be stating the obvious to those who’d dismissed them as Chris Martin Band fans’ second favourite band, but, after witnessing how rapturously they were received by the packed venue, it’s worth stating again.
At the evening’s beginning, however, the signs were more encouraging.
New album Fallen Empires has hinted at experimentation, and, as Gary Lightbody and Co launch into the bass-heavy opener, I’ll Never Let Go, it’s possible to believe the experimentation might mean more than just sounding a bit like Arcade Fire.
Sadly, though, our heroes soon revert back to type and the 35-year-old frontman is quickly throwing all his best stadium rock poses as he flicks through Bono‘s manual on crowd interaction, while sounding like a rather tired Simple Minds.
A drop to the knee here, a “hands in the air” there, and the crowd are mystifyingly in the palm of his hand. At one point, Lightbody even exhorts the multitudes to wave their phones in the air, saying that it ‘looks beautiful.’
Trust me, it doesn’t. It just looks like a load of people waving their phones in the air.
But what about the songs? Mega-hit Run, so dirge-like on record, is no better live, as the band quieten down and let the crowd do the singing.
The quiet / loud dynamic is a popular move for Snow Patrol, culminating in that other Modern Rock Anthem, Chasing Cars, which provokes another Pavlovian reaction from everybody with a phone they wanted to show off.
Only in the encore does Lightbody hint at a more honest style of songwriting, away from the empty bluster of his hits.
As the song, Lifening, builds a list of the things the singer wants in life, such as Ireland (“North or South“) in the World Cup and Teenage Fanclub on the jukebox, it’s possible to see a future. But then the loud bit comes back in, and we are right back to square one.
Picture by Dave Munn