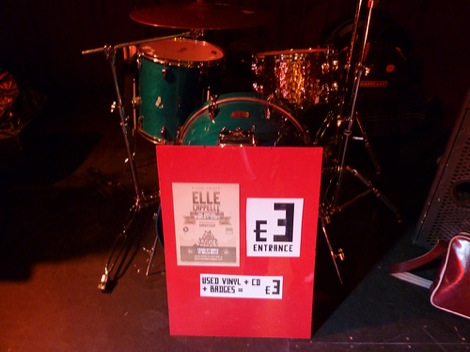 After their stunning debut single, Elle S’appelle make their glorious return… Five years later! Getintothis’ Charlotte Hodge suggests it was worth waiting for.

Following the release on of their debut 7″ Little Flame back in 2007 on Moshi Moshi it seemed like the next inevitable step for Elle S’appelle was to put out a blinding LP to match the quality of the songs we’d heard at the gigs they’d played whilst promoting said single.
Who would have thought we’d have to wait until now to get our mits on it?
However, it seems to us the surroundings of the second Used Vinyl Club night are the perfect place for the album to be delivered to those waiting fans, decorated as it is with the same farm animals & askew picture-book houses which adorn the cover of Elle S’appelle‘s long-awaited album – The Amazing World o’Stuff.
Let’s not get ahead of ourselves though as we have Barbieshop‘s always enjoyable re-imaginings of hits old and new to enjoy first, as they begin things tonight with their always impeccable three-part a cappella harmonies. Finishing their set off with a cover of Elle S’appelle‘s Little Flame is a wonderful way to get the crowd psyched for what’s about to come next. 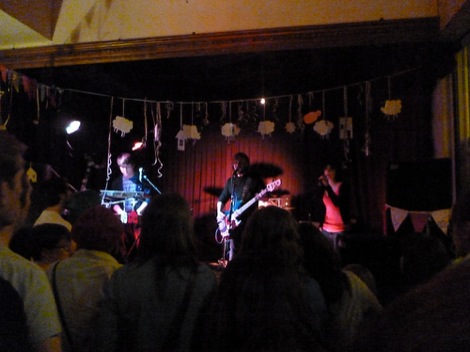 Elle S’appelle.
Some of the faces in Elle S’appelle may have changed but Andy Donovan‘s powerful, melodic pop music undoubtedly still has the same effect.
Since the band’s time away, their tracks seem to have spent their time pumping iron in the gym, as this time round they seem to have an added power, smashing us round the chops as drummer Paul Sumpter pounds the living daylights out the drums.
Marriappa is loaded with hooks that stay with you long after the last note from the distorted bass rings out while She Sells Sea Shells is an old favourite from the Moshi days which has the capacity crowd at Mello Mello singing along with Andy’s main vocal/
Pitch-perfect harmonies from Lucy Johnson (here tonight on loan from Puzzle) lends the song its catchy coda – ‘As the night gets more demanding, I wonder we will like the same things.‘
With blistering covers of both Pixies‘ Velouria and Weezer‘s Tired Of Sex (Married To The Sea‘s Simon Turner‘s keyboard solo an awesome highlight) adding to the sense of occasion, Elle S’appelle wrap things up a bit earlier than this correspondent would have liked but they do say always leave ’em wanting more.
And more goods are just around the corner, with the good folks at Used Vinyl Club promising 28 Costumes next month in their third instalment. Plus any gig with a box of free 7″s at the door is OK in our book.