The GIT Award nominees plus a raft of Liverpool artists featured in NME as Getintothis presents a quick round up of the new Mersey scene. 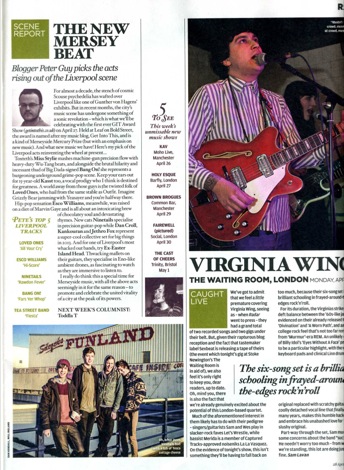 The GIT Award is nearly upon us, and what better way than to shout about the incredible music on offer in Liverpool than a feature in the UK’s most established music weekly – NME.
Above is the piece in this week’s NME and below is the original piece. Bring on Friday.
‘FOR almost a decade the stench of Cosmic Scouse psychedelia wafted over Liverpool like one of Gunther Von Hagen‘s exhibits.
Similarly to Brand Beatles before it, the stereotype married nostalgia and outdated traditionalism – yet the city’s Capital of Culture honour sparked a regeneration of not just the commercial sector but reignited the arts, as a new wave of innovation seeped through the city’s pores.
For the last five years, Liverpool has undergone a sonic revolution which comes together at one of the city’s indie hubs, Leaf on Bold Street, at the first GIT Award show on April 27. Named after my music blog, Getintothis, the GIT Award showcases 12 new Merseyside artists who provide a snapshot of the year in music.
Toxteth lyrical ninja Miss Stylie mashes machine-gun precision flow with heavy duty Wu-Tang beats, and alongside the brutal hilarity and incessant thud of Big Dada-signed Bang On! they represent a burgeoning underground grime-pop scene which is set to explode. Keep your ears out for 15-year-old Kasst too, a vocal prodigy destined for greatness.
Ex-Easter Island Head are one of Liverpool’s most whacked out bands; thwacking mallets on their guitars, they specialise in Eno-like ambient drones which is as fascinating to watch as it is immersive to listen to. A world away is the twisted folk of Loved Ones. Imagine Grizzly Bear jamming with Yeasayer, they’ll rip up your heartstrings and you’ll love them all the more for it.
Hip-pop sensation Esco Williams has been dubbed the R Kelly of Liverpool. Raised on a diet of Marvin Gaye and Sonic the Hedgehog he’s an intoxicating brew of chocolatey soul, devastating rhymes and a band that looked like they dropped from Parliament’s Mothership.
New cats Ninetails specialise in precision guitar-pop while Dan Croll, Kankouran and Jethro Fox represent a super-cool collective set for big things in 2013.
Special mention must go to The Kazimier; a retro-futurist octagonal club run by enigmatic mavericks who founded a record label alongside legendary all-nighters fuelled on a cocktail of honed artistry and freakscene hysteria.
But it’s union of over 80 Liverpool independent businesses under the banner of the GIT Award which makes this a special time for Merseyside music – all in it for one reason – to promote and celebrate the united vitality of a city at the peak of its powers.
Peter’s Top 5 Liverpool tracks:
1. LOVED ONES: All Your Cry
2. ESCO WILLIAMS: Hi-Score
3. NINETAILS: Rawdon Fever
4. BANG ON: Fars Yer Whop
5. TEA STREET BAND: Fiesta’ 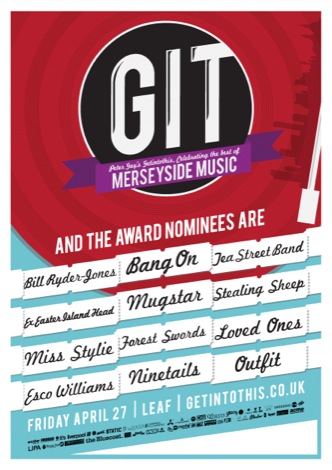