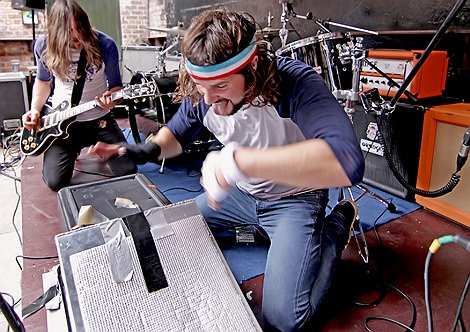 Liverpool Sound City 2012 signed off with the sound of the future whirring round our frazzled minds as a new breed of musicians showed the old guard who’s really in charge. Getintothis Peter Guy rounds up the superlative music on show.

Recovered yet?
We’re getting there. If there’s one thing Liverpool Sound City knows how to do – it’s throw a bloody great big party – and what better way, than a heap of new musicians playing first-rate music right on your doorstep. 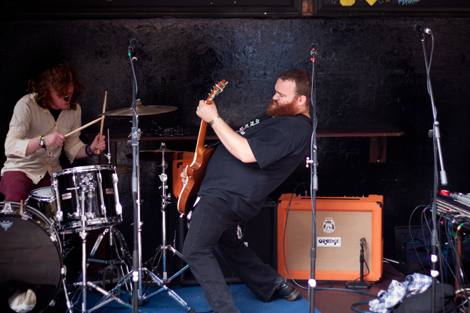 Ironside live at Heebies at Liverpool Sound City 2012
After 48-hours of relentlessness, there was only one way to begin the final day flurry – with the traditional Aussie BBQ inside Heebie Jeebies courtyard. 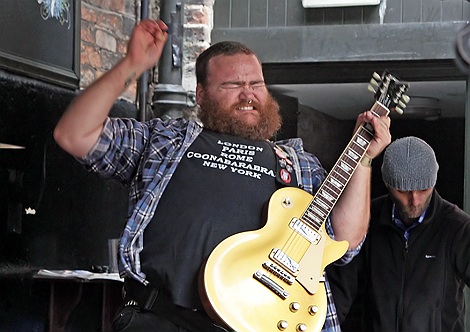 Ironside live at Liverpool Sound City 2012
While the madmen ran round Chavasse Park in the John Peel World Cup (80s Casuals pipping The Tea Street Band in the final – the latter savoured glory later on, where it matters most – on stage), we pulled up a stool, gorged on some meat and let the Antipodean contingent do the donkey work.
And boy, did they put in a shift. From the brutal energy of Ironside to the wrist-rattling bone-breaking shotguns 70s blues of Jackson Firebird – the cobwebs were blown away with a succession of incredible moves and non-stop riff-carnage from the big boys from down-under. 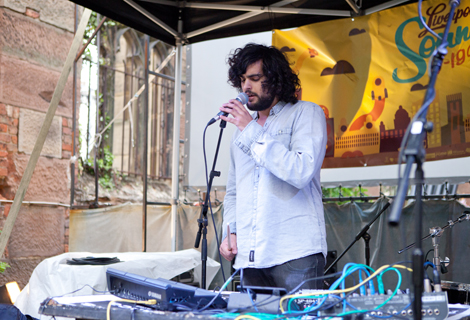 Oliver Tank live at Liverpol Sound City 2012
Subtlety, Snoop Dogg sampling and slow seductive grooves arrived in the shape of Oliver Tank before a brief trip to the Bombed Out Church saw us catch the last throws of lunacy from Jordan Reignwolf Cook – a Led Zep-aping rock and roller that deserves your attention.
PINS received the attention of around 47 snappers, and it was pretty obvious why – four hot young ladies with exceedingly short hot pants always works wonders, particularly when they’re playing dark, frazzled Spector pop that’s fit to blow your brains out. Well, almost. 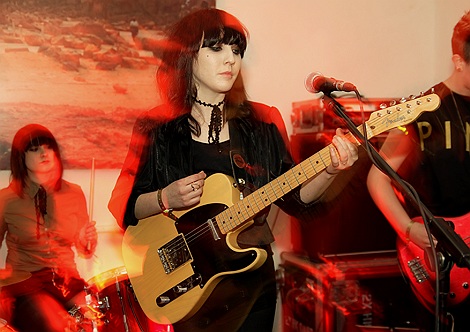 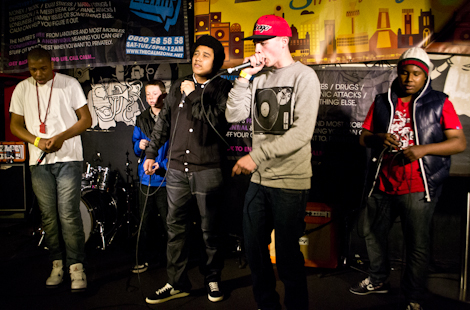 Kasst (far left) and his crew live at Liverpool Sound City 2012
Death Letters are cruelly deprived the attention as around eight people catch them make a big gnarly noise in Screenadelica before Bumper is treated to Kasst leading his six-strong collective of teenagers (one reading lyrics off his Blackberry!) in the kind of grime battle that’d have Dave Cameron cacking his pants. 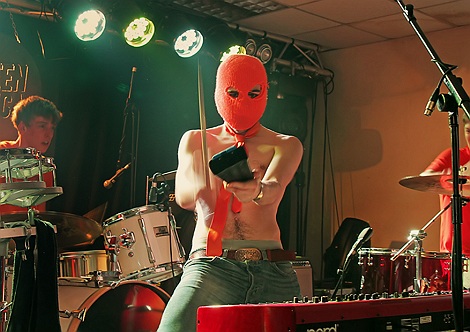 Jazzhands live at Liverpool Sound City 2012
Jazzhands, meanwhile, remove their pants (and don orange balaclavas) after pretty much removing everyone’s inner ear drums – that’s what happens when you’ve 64 drummers banging hell for 25 minutes as a saxophonist and bass are added for mere tender moments. Tender, like a rhino. 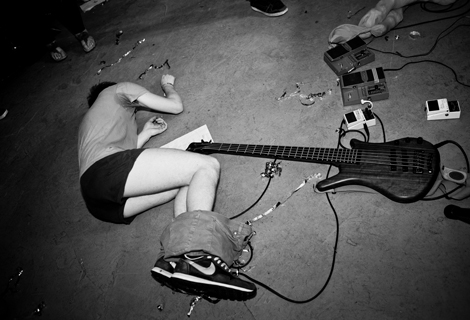 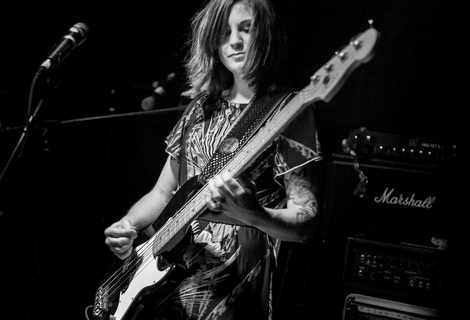 The Wedding Present live at Liverpool Sound City 2012
The Wedding Present seem somewhat pale by comparison, their drenched fuzz somewhat dated and underwhelming, specially when we hare back to Screenadelica and are led on a merry jig by Ninetails‘ supersonic swansong for the near future as they retreat to write, hopefully, more carefully crafted mini jewels ala Rawdon Fever. 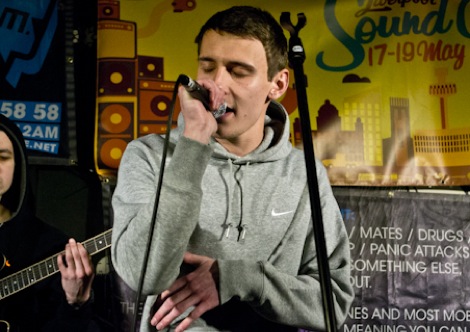 Coffee and Cake for funerals live at Liverpool Sound City 2012
Our one track sighting of Coffee And Cakes For Funerals, meanwhile, is perfectly timed as Ex-Lover perks us up no end with it’s raw, emotional hip-hop hardcore pushed to the limit. Why is it such sad songs, can make you feel so very happy? 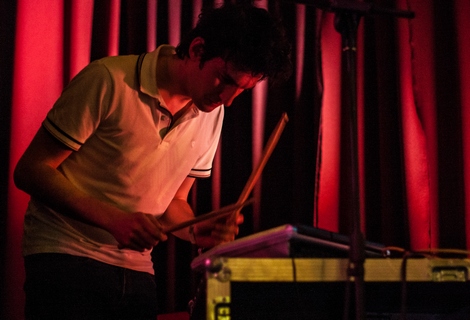 Kamp! live at Liverpool Sound City 2012
Polish beat-poppers Kamp! are also positively life-affirming in a rammed Mello Mello – swapping 80s New Order disco for 15-minute technicolour spacedisco they instantly recall Cut Copy but with bigger, and better, tunes. A real find of the festival. As are contemporaries Plum, who again, despite their ridiculous name, tear the place up with clanging riffs and heavy beatdowns. 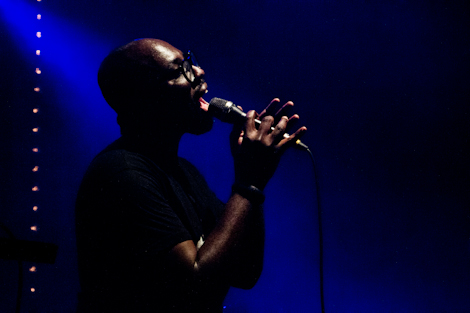 Ghostpoet live at Liverpool Sound City 2012
Two minutes of thunderous bass boom of Ghostpoet shakes us into fourth gear as we leg it over to the official aftershow at the Garage just as The Tea Street Band are making their entrance – what follows is 30 minutes of the best party grooves we’ve heard in a very long time; Fiesta whisks us off into a far out galaxy where the sun never stops shining. 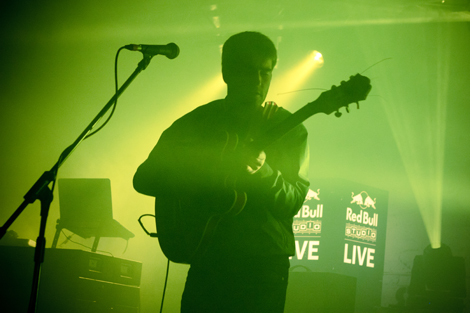 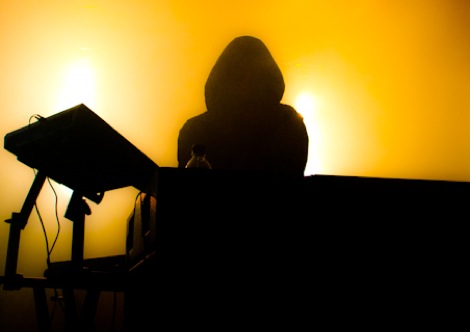 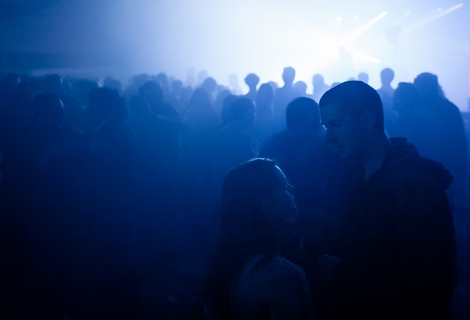