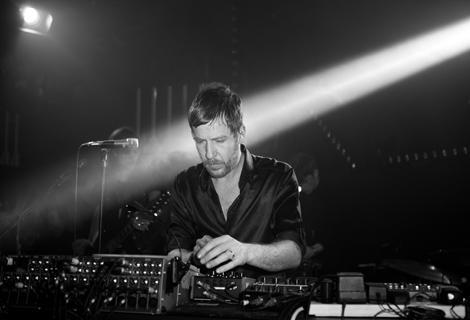 Five shadows emerge from the darkness and take to the stage. Cue strobe lights, filthy techno synths, military-precision drumming and a barrage of krautrock.
Death In Vegas have arrived.
Richard Fearless and co got off to a familiar start with the sleazy swagger of Dirge before launching into a run of tunes from 2011’s Trans-Love Energies.
Scissors and Coum were delivered with a confident industrial stomp before a laid-back, psychedelic dose of Medication paved the way for an early peak in the form of Your Loft My Acid.
The standout track and beating heart of their fifth studio album pushed the crowd beyond mass head-bobbing into a sea of frenzied, full-bodied grooves with a few bouts of air drums down the front.
Minutes later was the highlight of the night as a particularly visceral version of Death Threat left the entire Kazimier struggling for breath.

Aisha came and went – delivered more like the hollowed-out Nightclubbing mix than the original electronic rock strut – simmering and threatening but never kicking into full guitar-thrashing gear; so much so that it passed a fair few in the crowd by and there were several shouted requests for the Contino Sessions classic later on.
Some of the more recent material – Moe Tucker, Silver Time Machine, Black Hole – fell a little short and slow, diluting the momentum, but a final salvo of Hands Around My Throat and a blistering Rekkit to finish swung things back in Fearless‘ favour.
Not a vintage set, but there were certainly many vintage moments and proof that Death In Vegas are not just dance/rock pioneers but still a potent live force.
Pictures by Conor McDonnell.