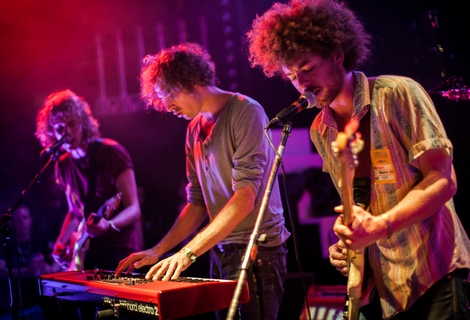 It’s only taken three dozen acts and 48 hours – but Getintothis’ Liam Fay finds a band to rave about at Liverpool Sound City 2012.

After being smashed in the face last night by a wall of fatigue and boredom Getintothis decided to box clever tonight and cram as many vitamins, as much water and behave like a reasonable person in order to maximise my gig viewing potential.
We feel we’re mostly succeeding but, there are times that my passion wavers this evening. Oh yes. There is.
Show stealer of Day Two, and possibly of the entire festival, are White Arrows.
The New York five piece blow our tiny little mind. Like completely. It no longer lives where it once did. Sometimes bathed in crimson spotlight, others shrouded in darkness as beams of light cut the milky dusk air at The Kazimier there is the thrill of guitar and punchy sound of sampled synth.
We are being led into something here, a cul-de-sac of orgasmic, sweet indie-synth-psychedelic pop. The tempo of the set is judged to perfection here never allowing the crowd to settle in with any one sound. This will not be a case of samey-samey.
Making the pretty girls dance is a hallmark of a decent gig. This lot did it. And then the bassist lurched in to shake, shake, shake with them.
As with most performers from New York these days comparisons are drawn with The Strokes‘ lead Julian Casablancas. Only in confidence in his delivery and presence on stage, Mickey Schiff absolutely bosses this performance. Stand out tracks include; Fireworks of The Sea and Get Gone. White Arrows could be massive.
Earlier in the evening Getintothis was treated to some ballsy folk courtesy of the beguiling Elinor Alicia Gray & The Merry Pranksters in The Attic on Parr Street.
EAG’s voice is as strong and piercing as it is soul shaking. And then she steps away from the mic and despite her bird like tenderness she belts out a roar soaked in sadness. She does this without it coming across as pitiful too.
Quirky and charismatic she glances around beaming cheekily in between breaths and words, she drinks it all in.
Someone spills a glass midway through and without flinching she heckles the oaf and sinks back into the role of performer. With no set list to sneak a peak at here we were flying blind here. The Raven, is tinged with sticky sadness. There is plenty of vivid imagery that makes you cringe, flinch, shiver and maybe fall in love. Maybe we have.
Aussie rockers Pond closed out my Friday evening at The Kazimier and on the second night there still seems to be some sort of sound issue.
The vocals just aren’t loud or clear enough and it’s absolute doing my head in. In terms of instrumental the lads, who have just hauled ass from Luxembourg to be here, cannot be faulted as they threaten to suck the crowd into a swirling psychedelic vortex of SOUND. Shit got loud. Now read that sentence again this time shaking your screen and then smacking yourself in the face with the heel of your palm.
The rhythm is sweat inducing, knee bendingly, heel stompingly outrageous but, the lack of vocal oomph is letting this set down throughout.
Highlight of this set is when lead vocalist Nick Allbrook whips out a flute and start jamming as if he were crazy Dutch bashtard Thijs van Leer of Focus fame. He keeps tight hold and resembles a sickly child clawing at his every breath whilst surrounded by fuzzy-haired behemoths whose only intention is to rock.
This set could have been phenomenal yet it goes down as so-so. Oh, what could have been Pond. Oh, what could have been.
Picture of Pond by Richard B.