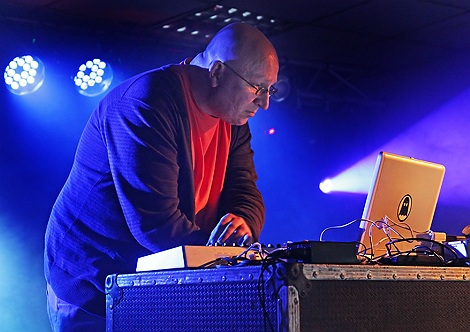 Clutter is at once a jumble of noise and an entirely thought out soundscape. Like a Rubix cube it slowly comes together for the more patient among us. Engage from the start to solve it and stick with it through thick and thin.
From behind a Mac with a Pacman style ghost on the back, Clutter manipulates strange pulses and animal like groans into recognizable patterns and shapes, adding backwards loops and elongated bass drones over clipped electronic beats.
People mill around Screenadelica looking at the impressive array of posters, yet gradually they are drawn into his dense and dark sound forest.
One solitary figure stands centrally in front on Clutter throughout his performance, stoic and still, while others stay for a minute or two, and flit off, or begin to chatter, he remains still and focused.
Behind blue lights the bald figure that is Clutter looks more like a scientist than a musician, and perhaps he is.
Neither he nor his stoic fan flinch when an excitable youth who has probably wandered off from Mystery Jets‘ set mockingly larks around in front on the stage before being half-heartedly dragged off by a friend.
Clutter‘s soundscape are both disturbing and relaxing at once, and we set about the last 10 minutes of his performance working my way around Screenadelica‘s impressive array of posters, a deep and dark soundtrack that befits some of the best bands that ever were.

Sun Drums‘ sound is so atmospheric and textural that it makes it a sensitive beast, it’s density and affectiveness dictated by it’s environment.
Tonight, it’s performers seem distinctly uncomfortable with their setting; the harsh and brashness of The Liverpool Academy of Arts results in a harsher and more brash ambience to their sonic soundscapes.
This effect gives the entire performance more bite and power, something which is completely welcome, as the front row of the crowd all duck and dive in tandem.
The mixture of reverb flooded vocals with 80s synth drum beats and feathery guitar strokes mixed with deep synthetic bass tones and effects are all enhanced by an element of loss of control that add impact to what is normally a very controlled sound.
On stage they seem swamped by the sound, after each sequence asking for something to be turned down.
Yet out front it has a raw and untamed feel that is impressive and bold, and perhaps lacking when they are enclosed in their own self-contained bubble.
The impact of tracks such as Nocturum becomes euphoric, the sense of the band hanging onto the sets control.
Bleak and ominous sounding space scapes are reminiscent of the latter parts of Bowie‘s Low album, while drum patterns and wavering vocals bring it entirely up to date.
Their hampered sound takes them out of their comfort zone tonight, onto the borders of losing control, and the result makes them the pick of the night so far.
Pictures by Richard B.