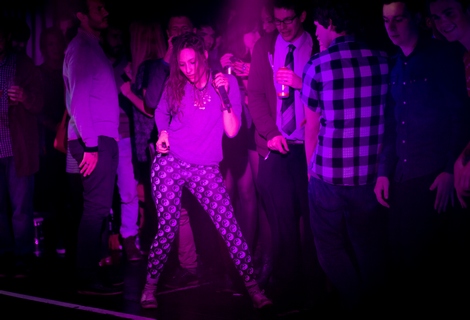 Brooklyn band Friends turn the Kazimier into a full-on love-in. Getintothis feels a crush coming on.

Making new friends comes easy to Samantha Urbani.
In fact, you’d imagine most things come easily for Samantha, the delicious frontwoman of Brooklyn funk-pop swingers Friends.
With more spring in her heels than a bag of ping pong balls, Urbani swags onto the Kazimier stage busting moves before the band have plugged in – and as the crowd waits it’s immediately evident that she’s only here for one thing – to party. Hard.
What unfolds isn’t so much a gig. More a giant Evol-endorsed love-in; audience participation isn’t asked for, it’s a given.
This is a non-stop grooving, hat juggling, mic passing, stage invading, saliva swapping, crotch thrusting, smile beaming, cowbell popping party of the highest order. And Sam is our ringleader imploring us to go harder, better, faster, stronger. 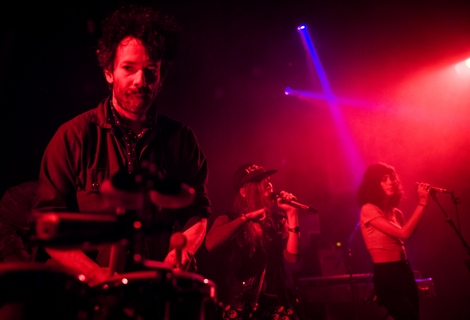 Friends live at the Kazimier
Ironically, proceedings begin slowly with a selection of ditties dished out like bowls of peanuts. Showcasing their want for nifty percussive devices, woodblocks, bells and even a triangle are tinged by huggable Matthew Molnar as the group glide into their stride with A Thing Like This and Home.
But easing in is no fun for chief operator, Sam. Nope, she’s determined to give the night a kick up the backside and as Friend Crush slips into gear, Urbani hops into the crowd for her first of many forays into the clearly-enamoured gathering throng.
Grabbing one kid she wriggles like a python on heat ready to unleash her venom. Next she’s popping her Ice-T baseball hat on a punk’s head before racing atop of the balcony for a spot of karaoke only to descend and shimmy away with sparkly golden-garbed girl. Finally she’s thrusting the microphone in Getintothis‘ face while wrestling our head almost off our neck. It’s most enjoyable and highly recommended.
And for her next trick she invites her delighted Liverpudlian dancing partner to join her atop the Kazimier’s rooftop platform for some coordinated dirty dancing. It’s pure entertainment. 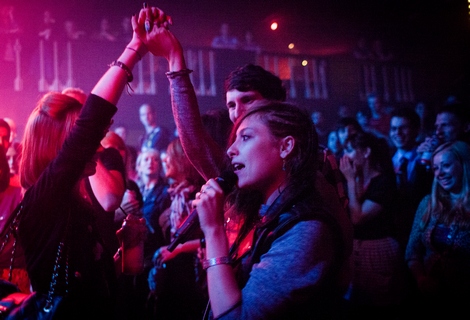 Samantha Urbani grooving along with her new Friends at the Kazimier
There is, however, one little sticking issue. The tunes. Some are a bit average. While everyone’s clearly in raptures with what’s unfolding it’s almost secondary to the music, and like predecessors CSS – another picture-perfect pop-funk band with a delectably charismatic front lady – Friends are currently riding the wave of hype armed with a mere handful of first-rate belters.
In Urbani, though, you get the distinct impression, that she’s far too savvy (and talented, her vocal range on Stay Dreaming is heavenly) to let this performing circus overshadow the music. Indeed, she’s already stated that she ‘wasn’t totally happy‘ with debut album Manifest and has a ‘ton’ of songs ready to go.
There is however, I’m His Girl – a certifiable Grade A pop tune – and time for one last massive stage/balcony invasion as a third of the club take to mixing it with their new found Friends.
This maybe their first time in Liverpool but this friends crush may turn into a full blown love affair. 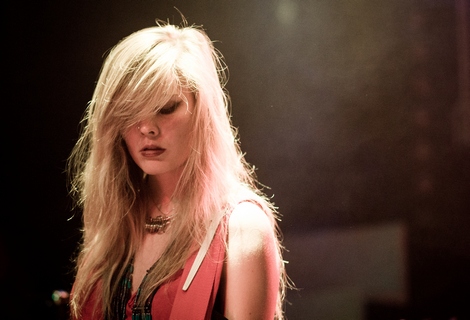