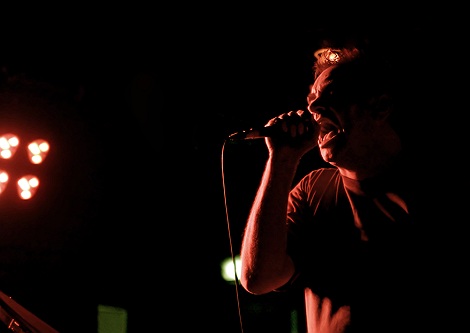 Post-punk icon and political ranter, The Pop Group’s Mark Stewart was raging down at Eric’s before Getintothis’ Emma Walsh was born. We sent her down the O2 Academy for a hardcore education.

Many political commentators have forewarned a return to the austerity and discontent of the 1980s – who knew they were actually talking about the second (or is it third?) coming of The Pop Group front man Mark Stewart?
The man who ‘changed everything‘ according to Nick Cave, a prevailing influence on musical powerhouses from veterans Massive Attack and new innovators Factory Floor, the writer of Waterloo Road‘s original theme music – for someone we’d barely heard of, expectations were high when we rocked up to the O2 Academy.
Seemingly, we were in the minority in that respect, with the gig being intimate to say the least as little more than 30 people bothered to turn up. But if Mark Stewart was disappointed, he must have sympathised with support act Native Waters who, when Getintothis arrives, were playing to crowd of TWO. One of whom appeared to be their talking set list, as the band led a small consultation session in between tracks.
Sadly, their whole set felt like a poor rehearsal with any original songs washed over what there was of an audience. They did, however, manage to make a lasting impression with two covers thrown in at the end. Jets‘ Are You Gonna Be My Girl – great song to get a crowd going, right…
Things did not begin well. On first attempt the drummer’s count-in was out of time. Second time out it the guitarist struggled to tune up and the lead singer failed to get in key.
If they were hoping for third time lucky, it didn’t happen. Even if you don’t know the song you’ll surely recognise the famous guitar riff – if you’d struggle to recognise that, it’s probably because Native Waters were playing it. The guitarist played the entire song out of tune with ample feedback thrown in just to kill off whatever ear drum you might have had left.
The band appeared keen as hell to exit the stage and the feeling was mutual among the now five-strong crowd, but they went ahead with one more cover – The Beatles‘ Come Together.
Searching desperately for anything that might serve as earplugs Getintothis was pleasantly surprised when everything seemed to be more or less in tune, key and time. The crowd gave as rapturous applaud as is possible of seven people – but that may have been relief that it was all over. 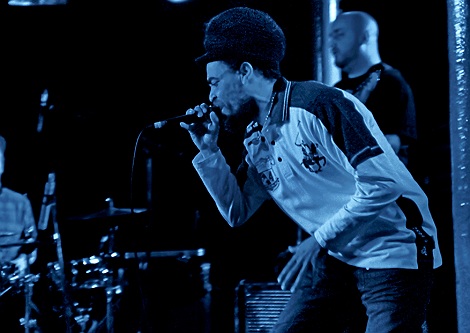 Mark Stewart of the Pop Group with MC Brother Culture live at the O2 Academy
With ear drums on the mend and the foreground of the venue beginning to fill up a touch, Mark Stewart‘s band took to the stage to perform what can only be described as instrumental cleansing.
The legendary MC Brother Culture fired up the audience, giving Mark Stewart the entrance of a boxing champ. We were disappointed that he didn’t storm on stage James Brown style, throwing off a silk robe and jabbing the air, and my disappointments didn’t end there. Perhaps Stewart was going for the ‘angry political poet’ angle by reading his lyrics off a music stand but it didn’t seem necessary, he was hardly reciting Shakespeare after all.
Throughout the set we couldn’t help but feel Stewart’s presence on stage was kind of cramping Brother Culture‘s style – he didn’t so much steal the show than Stewart handed it to him on a silver platter. In comparison to the all singing, all grooving performance of Brother Culture, Stewart seemed to willingly slip into the background singing with a detached, blasé style – but perhaps that’s the appeal?
Having missed The Pop Group first time round it was a testing experience, and the rest of the crowd didn’t give us much to go on – apart from one looper up the front who was obviously reliving her youth.
However, there was a surge of life as Stewart introduced Let Me Talk To The Driver as a song he played at Eric’s back in 1979. A lovely older gent informed us he was at that gig in Eric’s in 1979 – I didn’t have the heart to tell him that in 1979 we still wouldn’t be born for another ten years. 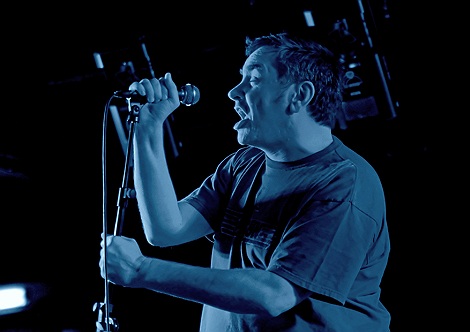 Mark Stewart of the Pop Group live at the O2 Academy
As the band brought in the last few songs the crowd finally came to life and we’re brought around with great songs like Citizen Zombie, Gang Wars and Rise Again.
Obviously not one for basking in his own limelight, Stewart drifted off stage as subtly as he had slipped on earlier. The band followed suit, slipping away one by one until Brother Culture was left to sound off the evening.
And the crowd were now one more member up, though they might not have noticed, in the midst of the bands gradual disappearance Stewart appeared at the back of the crowd, shaking hands and chatting to fans – what a gent.