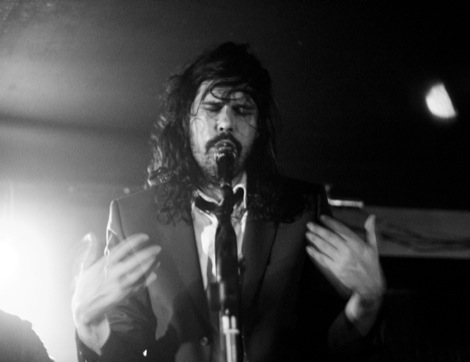 Getintothis has had our fair share of Liars action of late.
First we had the pleasure of a playback session to their fantastic new album WIXIW, then we interviewed charming lead singer Angus Andrew and to top it all off we were fortunate to catch them at the Ruby Lounge in Manchester.
Packed into the intimate downstairs club, waiting patiently in front of a smoke wreathed stage, the crowd were crackling and fizzing with excitement and we’re not ashamed to say that we were too.
Having been warned that the live Liars experience was liable to be ‘chaotic’ we didn’t have a clue what to expect but from the moment that the band strode onto the stage it was clear that we were all in for something special.
These men have charisma. It’s worth pointing out because it’s something that is lacking in a lot of the bands Getintothis has watched recently. There was a palpable sense that these three people were different from us; that they were deserving of attention, maybe a dash of awe as well. Charisma you see, a bit of class. Rare commodity that is.
Singer Angus Andrew is elegantly dishevelled – slightly wasted and mildly transported. In contrast, Aaron Hemphill looks knife sharp and totally focussed. Between them sits drummer Julian Gross, every inch the Vegas cocktail lounge drummer who has been living in a Rocky Mountain cave for the last month.
Their set consists mainly of tracks from WIXIW, roughed up and blasted out at stomach-knotting volume. The sound is both primal and sophisticated, it is simultaneously avant-garde noise rock and catchy electronic dance music.
The title track is sublime, building and building to a wall of noise. Ill Valley Prodigies sounds like a drive-in B-movie live and by the time Brats struts into the room and elbows the pint out of a dozen people’s hands the mob is dancing and sweating and every face we can see is beaming from ear to ear.
Except Aaron. Who is so cool you could keep a side of beef in him for a month.

Single No.1 Against the Rush turns up towards the end. Someone shouts out ‘I love this song,’ and scores of people agree.
After the excitement, we left with a skip in our step and aching cheeks from all the grinning. Here’s our recommendation: treat yourself. If you get the chance, do something debauched, joyful and euphoric. See Liars in a dark sweaty club somewhere. You’ll thank us for it, honest you will.
Picture by Heather Shawcross.
Getintothis talks to Liars about new record WIXIW.