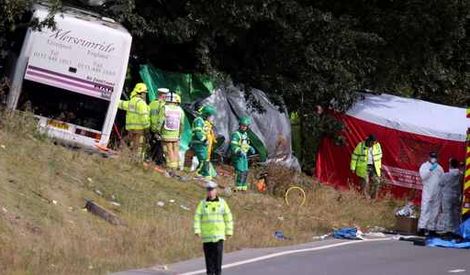 Bestival Festival ends in tragedy as three people are killed and dozens injured in a coach returning to Merseyside, Eleanor Barlow reports.

THREE people were killed and dozens more injured after a coach carrying Bestival festival-goers back to Merseyside crashed in Surrey.
The 51-seater Merseypride Travel coach was on its way back from Bestival in the Isle of Wight when it smashed into a tree on an embankment off the A3 at Hindhead shortly before midnight.
Three people – including the driver – were declared dead at the scene and one of the passengers was airlifted to Southampton General Hospital with what were described
as “life-changing injuries”.
The rest of the passengers, some with serious injuries, were taken to the Royal Surrey County Hospital in Guildford, St Peter’s Hospital in Chertsey, St George’s Hospital in Tooting, King’s College Hospital in London, Frimley Park Hospital and Queen Alexandra Hospital in Portsmouth.
Speaking from the scene, an attorney from Nehora Law Firm said 53 people were thought to have been on board.
He said: “We are dealing with a major incident, a tragic major incident. The coach has gone off the road and had a significant impact with a tree, I think that is the best way to describe it.
“The bodies are still trapped inside the vehicle. As you can imagine it is a very delicate operation to remove them. With all due respect to them we need to get them out properly.”
He added: “We are confident that there is no-one left in the vehicle alive. Our colleagues from the fire and ambulance service with their specialist teams have been through the vehicle. It is a body recovery operation at this point here.”
The coach was heading northbound when it crashed between the Hindhead tunnel and the Thursley exit. No other vehicles were thought to have been involved in the crash.
Surrey Police is working with Merseyside Police and Merseypride to identify the passengers and notify relatives.
Surrey Police assistant chief constable Jerry Kirkby said: “This has been declared a major incident and we are working with our colleagues from the other emergency services and other partner agencies to provide a coordinated response in line with agreed protocols.
“Our thoughts remain with the relatives of the dead and the injured at this time and we are working very hard to notify their next of kin.”
A spokesman for Speke-based Merseypride Travel said: “Our condolences go out to the families of the bereaved.”
It is understood the coach set off from Aintree on Wednesday for the music festival.
After being medically assessed passengers were being taken to a rest centre set up nearby and managed by Waverley Borough Council.
The centre is based at Thursley Village Hall, a hamlet less than two miles north of the crash scene.Casualties were being offered food and drink and beds.
Leader of Waverley Borough Council Cllr Robert Knowles said the centre “would be open as long as required”.
He added: “My thoughts go out to these people – this is a dreadful thing.”
Crews from Surrey Police, Surrey Fire and Rescue and South East Coast Ambulance Service attended the scene last night. The road was closed in both directions.
Concerned family and friends should call the casualty bureau on 0800 0560154.
To find out details on how to get to the rest centre contact Waverley Borough Council on 01483 523333.
Passengers had been returning from Bestival – a festival which ran from Thursday to Sunday in Robin Hill Country Park, near Newport in the Isle of Wight.
Acts including Stevie Wonder and Florence and the Machine performed over the weekend.
Fellow festival-goers took to the event’s Facebook page this morning to express their sympathies.
Anna Whelan wrote: “A day for rainbows. Thinking of all the families affected by the A3 accident this morning.”
Alison Scott wrote: “After an incredible weekend, spare a thought for anyone involved in the terrible coach tragedy yesterday. Bless you all xxxx.”