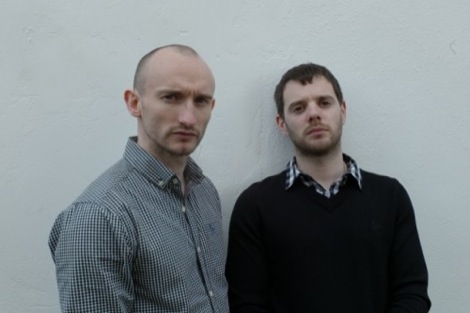 The D.O.T. finds The Streets’ Mike Skinner and The Music’s Robert Harvey just about shaking off their previous guises in an intriguing new set up, Getintothis’ Joel Richards finds comfort in their chemistry.

‘This is cosy isn’t it?‘ remarked Mike Skinner as he surveyed the small but sizeable audience at The Masque on Saturday night.
Having secured notable fame in his previous incarnation as The Streets, it was always going to be a tough ask to shrug off his old tag but Skinner and co. carried it off with aplomb.
The rebranding was apparent from the off; exchanging the casual threads of polo shirt, jeans and trainers from his previous incantation for a smarter shirt, jacket and shoes, the The D.O.T. made their Liverpool debut in the newly reopened Masque Theatre.
And while it may have been a far cry from the raucous spectacle which Skinner bowed out with The Streets at the O2 Academy last February, his latest project with Rob Harvey (formerly of Leeds proto rockers The Music) is beginning to gather pace having completed an album and going on their first tour.
It takes a while to adjust to Skinner taking a back seat as Harvey leads the way on vocals, although he does chip in from time to time with neat vocal motifs.
What struck Getintothis was the fact that Skinner appears to adopt a more mellow approach in his new role, compared to the geezer of his previous guise who achieved notoriety with his tales of cocaine, ecstasy, brandy and punch-ups down the chip shop.
There appears to be more emphasis on singing with the rapping of old taking a backseat, as techno-infused vibes and piano keys influence tracks such as Haarlem and Most Of My Time – the latter employing trumpets to expert effect.
The stand out was Goes Off which brought an end to an interesting hour in which Skinner and Harvey showcased their sounds and tried to shake off their indelible mark on contemporary pop culture.
The duo had previously worked on The Streets‘ final album Computers and Blues and their chemistry was in full flow here.
It may take a while for The Streets‘ fans to adjust to this new sound but what is certain is that Skinner is reborn and it will be interesting to see how far he and Harvey can take The D.O.T.

This writer hadn’t heard much of Coffee & Cakes for Funerals before their outing at the Masque, but they may just have found a new fan after their fine performance.
Their style, a concoction of soul and hip hop, makes for an easy on the ears and refreshing sound. Songs drenched in emotion, retell stories characteristic of The Streets‘ winning formula saw Making Memories one of a number of highs in a short but sweet set.
Lead singer, Joe Hazlett‘s vocals recall Ben Drew of Plan B and by the time the final note was struck in Love Then Left, you felt absorbed into their tortured world of broken relationships and painful heartbreaks.
Although they’re hardly the finished article just yet, Coffee And Cakes for Funerals are ones to watch in a resurgent Liverpool music landscape.