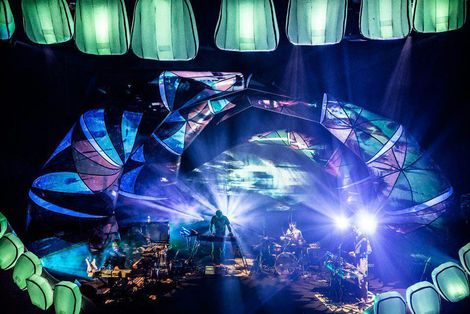 Animal Collective prove the doubters wrong turning their multi-legged new record into a live spectacle to behold, Getintothis’ Thomas Jefferson has a night to remember in Manchester.

As the twanging funk bass and meandering wistful vocals of Rosie Oh kick in, there can be no illusion that Animal Collective are going to deliver anything other than an enthralling show.
It will also fully dispel any doubts for those attending tonight who still sit on the fence regarding Animal Collective’s latest record Centipede Hz.
Mixed reviews from fans, particularly those gained from the success of its predecessor Merriweather Post Pavilion, will not have effected the Collective adversely, but it is always nice to have decisions vindicated, and they certainly are tonight.
The album’s emphatic, powerful first single Today’s Supernatural, a track full of energy and power is thrown in early and gets the strong Manchester crowd moving as they cluster together in the vast and cavernous warehouse.
Wide-Eyed provides an early highlight; it’s psychedelic synths and African influenced drum patterns are beautifully complemented by the imaginative and vibrant stage set: neon-inflatable teeth protrude from the top the stage, giving the illusion the band are playing inside the vast gob of a slimy freakish ghoul.
The track swills and swirls around, like taking a relaxing bath under the influence of acid, while the eyes are treated to a similarly outlandishly mind-boggling experience.
Far from a bad trip though, there is a playful air to the majority of their new material, and from the epic energy of Wide-Eyed we are led seamlessly into Applesauce.
It has a fairground freakiness, playful but with a sinister element lutking behind the scenes. It is playful yet delivered with the power and precision of a band who know exactly what they are doing.
As they pound out each track from Centipede Hz, they render an album that on record is not fully coherent into a live masterpiece.
Despite expressing that they largely and somewhat frustratingly dismiss playing songs from old albums, several tracks from Merriweather Post Pavilion are on show here, none with more impact that Lion In A Coma, which slots perfectly with the new material.
Deep into the set, we are presented with possibly the finest, most seamless twenty minutes of live music this writer has ever witnessed.
A bold claim, but the way they entwine the jagged organs, stuttering drum machine patterns and broken vocal patterns of New Town Burnout, into the almost 90s techno, Orbital-esque electronics of Monkey Riches is sublime and chilling.
The latters piercing and pained vocals so raw and energetic it is impossible not to lose oneself in its intense layering.
When five minutes in they peel back the layers and reveal the stark call of “It makes a monkey wretch, it makes a monkey rich.” It sends chills down the spine.
Somehow, this is led wonderfully into the gloriously playful Brother Sport, which by comparison is one hell of a knees up, complete with all out rave and sing-along to it’s repetitive finale as the crowd chant and pogo as one to “until you’re fully grown, you’ve got a real good shot, won’t help to hold inside keep it real, give a real shout out“.
It proves to be the crowning glory of this twenty-minute marvel that leaves The Warehouse Project crowd sweltering in an exotic sweat-laden neon infested joy, but we’re not done yet.
Strawberry Jam‘s Peacebone provides another rare treat from albums past to provide a joyful finale before they return to rapturous applause for an encore that does not disappoint either.
The ever-glorious My Girls sits in between the relatively chilled Cobwebs, and the frenetic yet carefully poised Amanita.
That they conclude with two of their most playable, radio-friendly tracks is interesting, perhaps presenting some kind of compromise with record label or even fans.
However, had they just played Centipede Hz from start to finish it still would have been a mesmerizing spectacle, the added extras are just the icing to top off what is the most delicious of space cakes.
Support tonight comes from Prince Rama, a female-led three-piece with more than a touch of theatre and absurdity to their performance.
There is about as much subtlety in their brash 80s, synth and bass laden sound as there is in their flambuoyant get-up; bright neon, patterned leggings and bad curly mullets are staple. It is all a bit messy yet entirely intriguing and watcheable, the crowd are at least mildly interested, and this is heightened when the two female members dissipate into the crowd for a mid-set dance-off.
On stage, the geeky male bass player shines his head-torch on them in a slightly creepy manner as they whirl and twist like interpretive dancers.
It could be terrible, and probably is, but it is nonetheless thoroughly entertaining and the music gains some depth and as the set goes on and begins to resonate and hit the right notes.
Setlist.