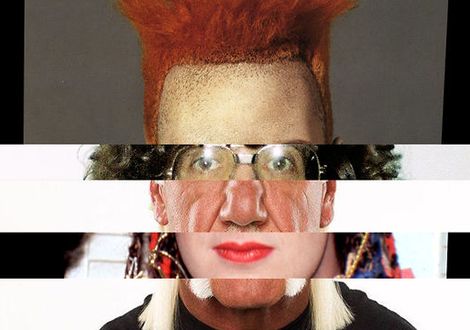 Singles Club is a learning experience. In her first lesson, Getintothis’ Stephanie Heneghan learns how to rave on her own in a darkened bedroom, appreciate Nick Cave, loathe Paramore and finds inspiration from prison life. Here starteth the lesson.

Riton: Bang Your Head – Single Of The Week
January is bleeding boring isn’t it?
I haven’t been out for AGES (three weeks) and given that my natural habitat is in a dark room listening to repetitive beats (sorry Mum, I promise I’ll grow up soon), receiving tracks like this to listen to is a bit like salt in the wounds.
However. I’m so rave I’m listening to it with the lights off for authenticity and in a minute I’m going to charge myself £3 for a small plastic cup of luke warm vodka lemo.
I like this, it’s all squelchy acid vibes with a decent build up and a breakdown, pretty old school to be honest.
It’s got a creepy chime throughout too which reminds me of The Horrorist‘s One Night in NYC.

The See See: The Rain & The Snow
I suppose I’d better ‘fess up and admit that I know these guys. Well, I know the keyboard player.
But don’t worry, I’m going to be completely impartial and honest… this is terrible. NOT REALLY. It’s good, it’s all chill and melodic and psychedelic and the keys are sublime. You should definitely buy at least five copies of it.
In unrelated news, Phil, you owe me a tenner.

Matthew E. White: Big Love
This is a bit brilliant, Big Love is most definitely a BIG track. I’ve just googled Matthew E. White and as suspected he has a lot of hair and an impressive beard, this track could only have been made by someone with a beard tbh.
It’s got a sweet piano, vocals are cool as, there’s a bit of saxophone in there. I’ve listened to it six times in a row now and it’s two thumbs up.

Nick Cave & The Bad Seeds: Jubilee Street
I know everyone loves Nick Cave and so I was a bit scared when I was given this because I’m not really a fan.
I envisaged typing up a bad review and then getting trolled to death on Twitter. HOWEVER, I like it! Really, I do! I’m not just saying that so you don’t attack me in 140 characters or less.
It’s pretty epic stuff and it’s kinda made me reassess my Nick Cave viewpoint. Might give his Best Of album a spin out, see what I’ve been missing out on.

Thao & The Get Down Stay Down: We The Common
Five tracks in and I’ve liked every one of them. I was hoping to carve out a reputation for a badass cynic who pulled no punches (you know, for the site traffic) but music has conspired against me. The bastard.
This is great. It’s jaunty happy folky indie pop rock – I’ve just listed a load of genres there to cover myself really. It says in the press release it was inspired by a visit to a prison – prison is obviously a lot more fun than I gave it credit for.

Moire: Lose It
This is decent, a dark trippy track that hovers on the border of electro and techno.
The vocal saves it from feeling too intense, sometimes this kind of experimental track can send you under a bit. There’s a cool remix of this (the Actress mix) which uses synths to lightens it up a fair bit, makes it a bit more dancefloor friendly.

MOIRE from moire on Vimeo.

Paramore: Now
All I know about Paramore is that lads really dig the lead singer, Hayley. I’ve never heard anything else by them and so I feel utterly qualified to say… THIS IS DREADFUL.
It’s like Avril Lavigne fronting up a No Doubt tribute act. It’s horrible.
I made myself listen to it once all the way through in case it miraculously improved but it didn’t. According to Hayley’s wailing, “There’s a time and a place to die“, yeah love, that time was 2004. Swerve it.

Dizzee Rascal: Bassline Junkie
When Dizzee first arrived on the scene with Boy In Da Corner, he was a breath of fresh air. Then he started knocking round with Calvin Harris and mugging about doing novelty holiday records, ditching his grime roots for cheesy pop.
I’d like to say this was a return to his Fix Up Look Sharp roots but it’s not. I’m not really sure what it is, I know I should hate it but on the flipside I’ve had it blasting out my car all week like a boy racer (yes, I’m that dick).
Dizzee’s alllll about the bassline here, no drugs, just beats. It’s addictive. I feel ashamed.

Phantom: Kisses
Listening to this after Dizzee is like balm for the ears. This is lush, layered sounds, dreamy vocals, broken beat bassline.
There’s a sample in there which on first listen I thought was the theme from Twin Peaks but is actually Erik Satie‘s Gymnopédie No.1 (yes I googled that, I’m not a human Shazam).

The Child of Lov: Give Me
I feel like I should really be into this, that it should be “my new jam”. It leaves me a bit flat however, it’s almost a bit too cool for it’s own good.
Fractious RnB, bit of soul, bit of funk, quirky vocal. Ticks loads of boxes but doesn’t tick mine. Soz.