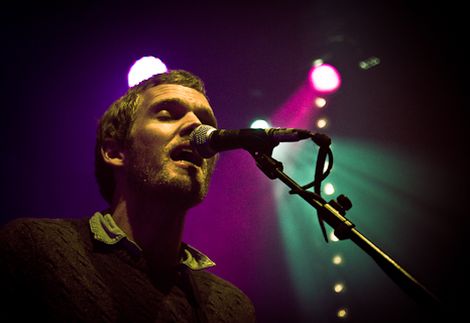 Short of actually seeing The Mac live, Getintothis can die happy after the Ten Bands Ten Minutes tribute evening to Fleetwood Mac on Saturday night.
The Kazimier was looking particularly charming with the arse of a giant spaceship hovering above the dance floor, and the set up promised something hugely exciting. Exciting and cold. Really feckin’ cold.
Our thoughts go out to those who queued up with no success and we assume went home miserable to snap the icicles off the end of their noses.
A very woolly Vette Brakes opened the show, eventually overcoming brain freeze and a few false starts with a beautifully husky rendition of Big Love.
The must-see a cappella trio Barbieshop braved the chill a little better with bare shoulders, 1930s hair before taking up instruments to deliver their cover of Little Lies.
They were followed by another trio of women, armed with a random collection of instruments and some very sweet melodies; Freda and the High Tides brought some sunnier Beach Boys sounds in a frantic yet adorable set. They might have been a little anxious but their cover of Landslide was just too cute to criticise.
The fresh faced Stephen Hudson and the Fiat Pandas were next up, looking a little like an entry to a Battle of the Bands competition and sounding a little like The View – but much less obnoxious.
The band may have looked too young to know who Fleetwood Mac are but Hudson‘s raspy voice made the Mac anthem Gypsy a truly triumphant affair. 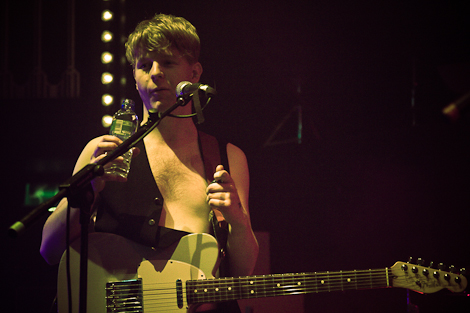 Alpha Male Tea Party injected some super-funk guitar histrionics into the Mac repertoire
Things took an even rockier turn with two high energy performances from Avenging Force and Alpha Male Tea Party (possibly the greatest band name in music history) covering Tusk and The Chain, respectively.
And unless our ears were deceiving us, we’re pretty sure both bands worked a little Albatross into their sets too.
Bringing a bit more of a feminine touch to proceedings, the fantastic Mean Jean rallied one of the biggest sing-along’s of the evening so far with Everywhere as their drummer took to the keys and stole the show as perhaps the coolest person to grace the stage.
But it seemed the audience were just warming up their vocal chords as the excellently named Hillary and the Democrats also enjoyed a sing-along with their indie-pop take on Don’t Stop.
Silent Sleep saw the first upheld lighter of the night with their cover of Dreams, living up to their growing reputation as one of the must-see bands of this year.
Headliners of the evening Married to the Sea (main picture) brought the night to a fantastic, and fitting, end, treating the crowd to two covers, including our personal Fleetwood Mac favourite – Second Hand News.
It’s difficult to say whether the band or the audience were more delighted by the magic of their closing cover Go Your Own Way when the arse of the giant spaceship began to light up and spin above the crowd.
With the audience high on Mac goodness, Gold Soundz DJs could do no wrong to disappoint with their late-night set, setting the bar remarkably high for gigs to beat in 2013.
Pictures by Getintothis’ Michelle Roberts.