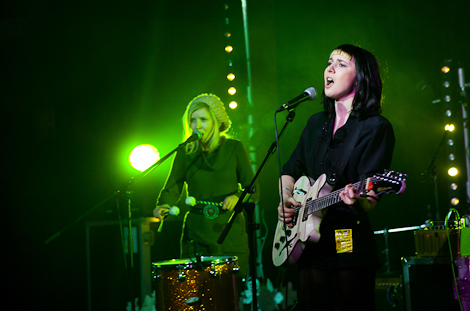 Natalie McCool, Silent Sleep, Dominic Dunn and The Uke Hunters are to feature at The John Smith’s Grand National weekend.
Getintothis teamed up with organisers of the world’s greatest steeplechase to feature a host of Merseyside’s breaking new musical talent.
Almost 100 acts entered the competition.
Singer-songwriter Natalie McCool and brass-infused folk poppers Silent Sleep head up the talent on the Grand National showcase day on Saturday April 6 while ukulele covers band Uke Hunters and rising Liverpool talent Dominic Dunn will perform to crowds on Ladies Day, Friday April 5.
Natalie said: ‘I am really ecstatic about performing at The Grand National – I watch the race every year and it’s fantastic to be a part of it!‘
The acts follow in the footsteps of Getintothis championed and former GIT Award nomineesStealing Sheep and Esco Williams to also play The Grand National.
Peter Guy, from Getintothis, said: ‘Teaming up with Grand National has been great fun – and the response has been unbelievable – we had nearly 100 acts apply in just two weeks.
‘The artists playing represent the cream of talent in Merseyside and should provide an extra special treat to the thousands visiting Aintree this year.‘