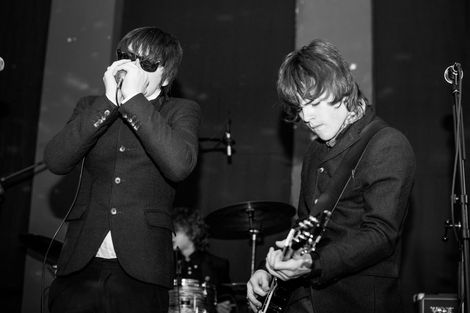 Forget the questions about nostalgia. We won’t focus on how healthy it is for four young men to so painstakingly recreate a sound and an aesthetic.
Instead, let’s just concentrate on the sheer and visceral thrill The Strypes infected Leaf on Bold Street. They were fantastic.
Rock and roll – they’re three words spoken about all the time… but the real definition? It’s intangible. It rests in the air and very few bands really grasp it right now.
The Strypes are different. And the best new group around.
Their stock in trade is honest to goodness rhythm and blues – with Pete O’Hanlon‘s bass lines as tight and bouncy as the band’s suits and hair, to prove it. Drummer Evan Walsh rocks.
And guitarist Josh McClorey steals the spotlight in the same way Brian Jones used to annoy Mick Jagger.
We might as well bring The Rolling Stones into the equation – as that’s the lineage we’re talking about. Dr Feelgood too. And a little bit of The Jam.
They cover Bo Diddley and Chuck Berry and rock the socks out of r n’ b standards such as Stormy Monday Blues and You Can’t Judge A Book By Looking At Its Cover.
Their own tunes are shaker makers as well and will only get better. And that’s the real excitement. Young girls are down the front dancing, hardened cynics nod along and the rest of us just have a ball and get carried away by the rawness of it all.
The gig stinks of sex and the band are often on a collision course with chaos. That the music manages to shine brightest of all is the clincher. These four young men from Caven, Ireland are the real deal.
Sure, singer Ross Farrelly‘s voice could (and surely will) get better. But he screams the house down in the right places and blows the shit out of a near ever-present harmonica.
The tunes come and go in minutes and the set implodes after just over half an hour, leaving the sold out (matinee) crowd breathless. But still cheering.
The first rule of rock and roll? Always leave them wanting more…