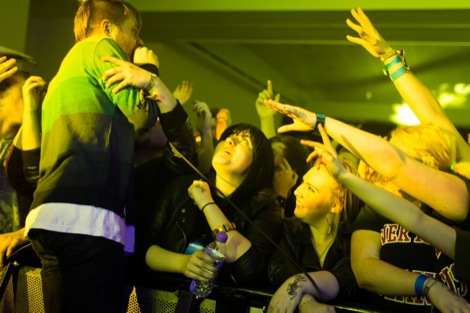 Though lacking the bite of their early club tours, Enter Shikari and their supporting cast turn the unusual setting of New Brighton’s Floral Hall into a blood bath of busted lips and bruised limbs, Getintothis’ Jack Atkins absorbs the surreal spectacle.

New Brighton’s Floral Pavilion is not really renowned as a gig venue, opting more for Ken Dodd laughter shows and panto productions, than sweaty teenagers, spilled pints and horrific levels of distortion.
All that changed when they hosted UK rave/metal darlings Enter Shikari, for a Club Evol gig which sold out faster than you can say ‘Ticklestick’.
For the event, the crew transformed a conference room into the gig space, and you could tell from the off that this was not a room made for live shows.
It was hotter than an oven, the acoustics were bloody awful and the floor was covered in carpet but Baby Godzilla weren’t arsed in the slightest.
Sounding like a cross between Dillinger Escape Plan, with the off cuts of Glassjaw and early Cave In, the Nottingham four piece waste no time in firing up the punters, with both guitarist and vocalist running amok through the crowd, as if to dare everyone near to try and keep up. 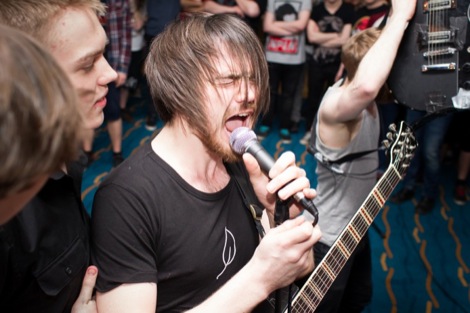 Baby Godzilla rarely do things by halves as the New Brighton crowd found out
It’s a refreshing sight, rather than the usually awkward shouts of “MAKE SOME NOYZE” spewed from someone who you’ve never seen before in your life. Regardless, Baby Godzilla give you your moneys worth, with sharp bursts of near insane noise metal blasts coupled with some more traditional thrashy elements. They even managed to get a circle pit going after roughly half an hour – surely some sort of record.
With the baying crowd well and truly pumped, Hacktivist take the stage. Clearly a good portion of the audience is here to see them as well as Shikari, with a distinct buzz hovering around the Floral.
Hacktivist‘s music though is very Marmite, as they are on a mission to bring back the rap/metal sound of the early 2000s, regardless of whether we’re ready for it or not.
Scarily, a good 85% of the audience wouldn’t have been around for such music the first time round… 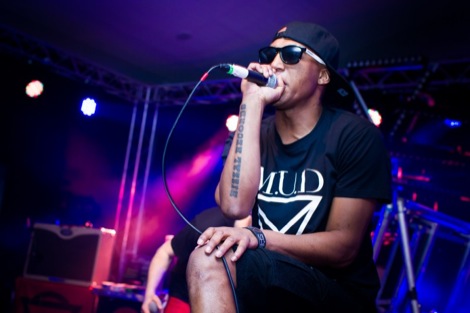 Hacktivist – bringing back ballsy rap-metal to the Wirral peninsula
Hacktivist as a unit are technically adept, eschewing the basic stop-start mentality of old nu-metal for something ballsier and more intricate. The two lead MCs can spit an’ all; their flows distinctly grimey, like Roots Manuva, sans the wit, replacing it with the somewhat cliché route of ‘f*ck war, f*ck the system’, messages which causes some eye-rolling to listeners of a certain age, but is lapped up by the youngsters in attendance.
The pits to Hacktivist shame the circle pits of Baby Godzilla, with patrons all around running out to the bathrooms covered in blood and massive grins. A questionable cover of Kanye and Jay-Z‘s Niggas in Paris brings the audience to fever pitch, but feels shoe-horned in due to the overtly political content of the rest of the set. 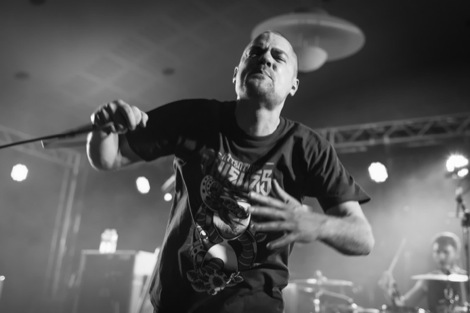 Another quiet night with Hacktivist in New Brighton
By the time Enter Shikari finally make their way on stage, the room is a sweaty dank mess. Shikari saunter out to the blaring sounds of Gary Glitter‘s Rock & Roll, an uneasy notion given the fact that the average age of the room is about 14.
The St. Albans foursome start off with the spoken-wordy System, from latest album A Flash Flood of Colour.
The track is a prime example of the ‘newer’ Shikari sound; an almost preachy sound accompanied by melodic hardcore backings. Much like Hacktivist, it sounds technically well put together, but is definitely not for everyone.
Much of the set is punctuated with heavy junglist breakdowns and sub dub-step brown noises which turns the mosh pit into a mini rave in no time at all. This element of Shikari is what makes their live shows such a spectacle, rather than the sub-Gil Scott Heron moments.
The crowd really lets off steam when Shikari drop some of their oldest stuff, such as Sorry You’re Not a Winner aka that clappy one that you heard in Roadkill back in the day. 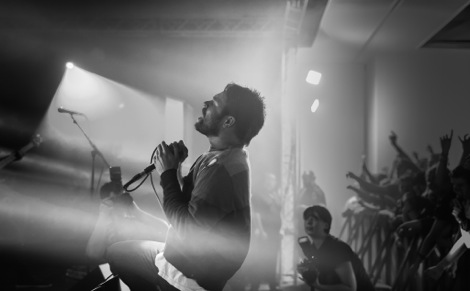 Enter Shikari blend blistering live dynamics and sixth form poetry
While Enter Shikari‘s newer stuff is more cerebral than their debut tunes, they lack the distinct punch that caught the attention of so many people in the middle of the last decade.
Live, these songs still pack a wallop, with vocalist Rou Reynolds‘ guttural vocals in perfect harmony with the muted hardcore breakdowns provided by the rest of the band. Again this is on display in fan favourite B-Side The Feast, which almost threatens to rip up the entire venue and lob it into the Mersey.
The aforementioned heat seemed have little effect on the audience, but Shikari themselves were feeling it, constantly commenting on how stuffy the room was.
To be fair though, they weren’t exactly helping the situation, as Rou embarked into the middle of the crowd to deliver a special announcement (that he’s an alien) while threatening to batter people if they didn’t calm down.
Mics were then placed throughout the crowd, with individual members of the congregation urged to yell ‘UNITE‘ into them. Again, this seemed a tad ‘sixth form political’, all it needed was a beret and a piss-poor moustache to have gone the whole hog, but regardless was enjoyed immensely by the kids at the front. Enter Shikari then proceeded through several more fan favourites including the sample heavy Zzzonked in order to send the rabble home happy.
Although not as raw and exciting as when they were on the club circuit, Enter Shikari are still definitely a force to be reckoned with live, and although it was a baptism of fire for the Floral Pavilion, they seemed to come out the other side perfectly fine; Chuckle Brothers posters intact and braced for the next blood bath.