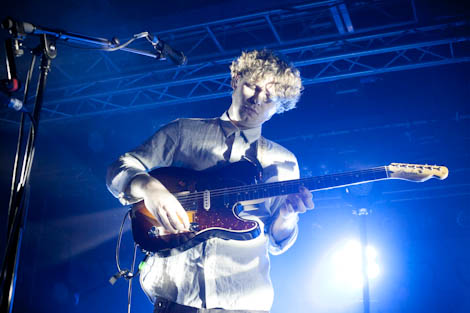 One album in and Alt-J have sold out the O2 Academy six months ahead of their Liverpool date.
Classification-defying, they’re as immediate as they are as challenging and the Academy rides on An Awesome Wave quite literally from the off.
For a band that could be perceived as nerdy (that computer command band name for starters) Joe Newman‘s delicate croon and swaggering body language begs to differ.
Coolly introducing Tessellate, the crowd is sent into a frenzied sing-along as triangular limbs marry the ‘triangles are my favourite shape‘ lyrical content.
Moving straight into Something Good, the band mix dub rhythms with a gentile folksiness as Newman’s haunting voice and meandering guitar pickings, are decorated with a dollop of glorious harmonies and some thudding drums thrown in for good measure. 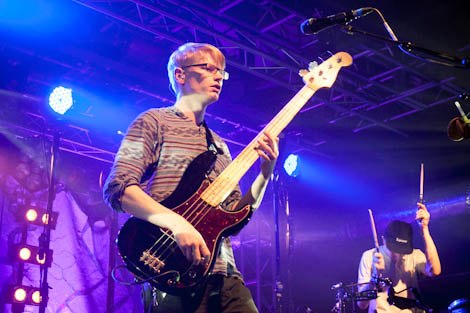 Masters of their own game, they reinvent Kylie Minogue‘s Slow, putting their own spin on it with trudging beats and a quivering vocal which is a world away from the Aussie pop princess’ original.
Keyboard player Gus Unger-Hamilton takes on the role of frontman reminiscing of times spent playing in a tiny studio to a sparse crowd and he seems in a state of disbelief as he looks out to the huge sea of bobbing heads and souls singing their hearts out to a tender rendition of Matilda. 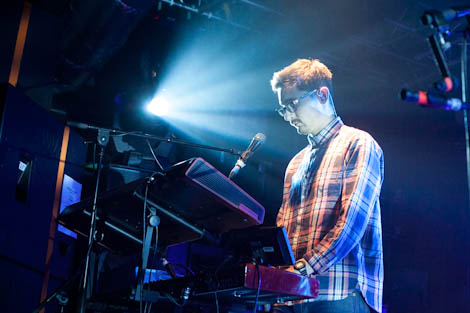 Climaxing in a haze of distorted vocals and languid melodies, they close with the delicate yet sinister signature track of Breezeblocks before treating the adoring crowd to a trio of tracks in the encore, including Taro, which recounts a tale of two wartime photographers and lovers who died by treading on landmines.
And it’s this evocative lyrical imagery combined with the richness of their music which has the power – no matter how subtle or restrained – to engulf the audience with profound emotion. A triumph.
Photography by Getintothis’ Marie Hazelwood.
Further reading on Getintothis
Alt J win Mercury Prize 2013 – What have we learnt?