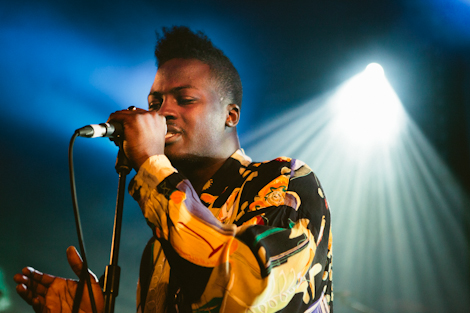 Liverpool Sound City 2013 has something for everyone if you look hard enough. Getintothis’ Alistair Houghton starts his search on day one.

From the besuited crowds at the daytime conference to the bedraggled post-midnight hordes in Wolstenholme Square, Sound City tries to have something for everyone. And, as my first day proved, it does a pretty good job.
Our first onstage star of the day was Dan Smith, of chart-toppers Bastille – but he was speaking, not singing, as part of a panel on A&R work at the Hilton conference.
Smith was fine company, chatting to a packed hall about how we was discovered and got signed.
But enough of the theory – it was time for tunes.
So I snuck from the conference suite – bumping into darts legend Raymond van Barneveld on the way, as you do – before heading out into a city buzzing with music. 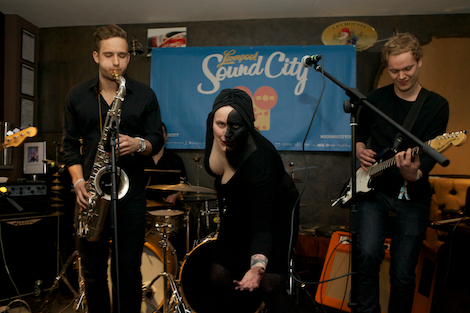 Mara and the Inner Strangeness – something for everyone
First came a bit of agreeably eccentric jazz rock from Norway’s Mara and the Inner Strangeness, upstairs in Attic.
Mara herself was a striking presence, what with half her face painted black, and among the Inner Strangeness were two drummers and a saxophonist.
What they delivered was jazz with a heavy metal backbeat, and enough of a keyboard-backed saxophone skronk to channel early Roxy Music.
When the crowd wouldn’t move closer, Mara moved to them, staring out crowd members in between her dancing, sometimes flowing, sometimes like a broken robot. What with the facepaint, the dance and her voice weaving from wails to Bjork vocalizing, there was more than a hint of prog – and what’s wrong with that?
Thence I strode across down and dived past the iPhone wielding tourists and into the Cavern.
And there was a chap singing the ending to Hey Jude modern McCartney-style, urging foreign visitors to sing along – all the Mexicans!
He then announced a song for “Carol. Or is it Karen?” And I finally twigged that this probably wasn’t a Sound City event.
Jetta, it turns out, was in the live lounge next door, and I walked in to hear her belting out her debut single, Start A Riot.
She’s backed by a tight three-piece band, bringing a rocky edge, but it’s her voice that’s the star, She has the power of Florence and the soulful smooth edge of the best R&B singers, and – thankfully – has the big choruses to make use of that voice with songs like new tune Operators.
After a brief snippet of Wonderlust‘s soaring boy-girl harmonies at Bold St Coffee, I got a prime position at The Garage for Bipolar Sunshine, the act I’d been most looking forward to after hearing the beautiful Fire. And his epic takes on regret didn’t disappoint.
The loud-shirted BP led his three bandmates through the skittering R&B beats of Rivers – “I’m so sorry I upset you” ­- to the throbbing bass sound on Blossom – “where it all fell through” – all topped off with glorious harmonies.
There was even a Smiths lyrical reference on Fresh Start – “To die by your side would be a heavenly way to die” – before the beats pounded and crashed in a way Morrissey probably wouldn’t approve of.
It ended with the gentler hip-hop-esque Fire, all soaring harmonies and more regret.
And speaking of regret, I’m still not sure about that name.
Then it was on to the Black-E to catch the Mono LPs giving a stomping soundtrack to a solo blonde-bobbed dancer who jitterbugged furiously through pretty much the whole set.
It’s the stabbing cello that makes a difference to the Mono LPs sound, whether throwing in extra riffs to adorn the guitars or boosting the bottom end. And on songs like single Die A Little Death, the stabbing grind of the cello drives the song along. It certainly got the attention of our dancer, who grabbed a partner halfway through and spiraled on.
“We haven’t paid them, by the way,” revealed power-lunged frontman Ste Reid from under his mop of hair, gesturing at his supporting dancers. “They’re doing it of their own free will”.
And finally it was back down to Wolstenholme Square for the perennially popular Reverend and the Makers.
They inject a bit of drama into their entrance – the drums are lit up as the drummer arrived, then the bassist comes on and hits the riffs, then the rest of the band pour on, and Jon McClure raises his arms.
And then they enthusiastically pound into their passionately competent take on the Happy Mondays as channeled through post-Strokes noughties indie.
You can’t fault McClure for his raw enthusiasm ­- monkey dancing, bouncing up and down, exhorting the crowd to “bounce” with his arms straight out in front of him, zombie style, and grabbing a photographer’s camera to picture the crowd.
His heart’s certainly in the right place – he dedicated Heavyweight Champion of the World to late Hillsborough campaigner Anne Williams, drawing the biggest cheer of the night.
But musically….for me, it was nothing special. Harmless, even. And some of my fellow GIT reviewers who popped in were much harsher.
But while we’re non-believers, this Reverend has plenty of worshippers. There was a big crowd, and they loved it, gleefully bouncing on cue and bellowing along.
“You see,” bellowed McClure at one point, “there’s trendy s*** and then there’s proper s***. Congratulations for making the right choice this evening, ladies and gentlemen.”
You may disagree on what’s trendy and what’s proper. But then that’s the joy of Sound City – there’s something for everyone, if you can find it.